Sunday, August 9
You are at:Home»Sports»Martial Arts»Pacquiao to fight Thurman in WBA welterweight showdown 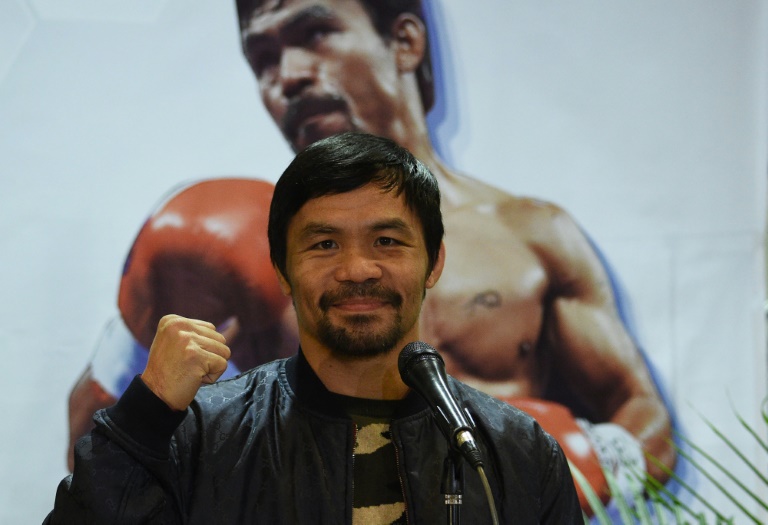 Philippine boxing icon Manny Pacquiao last month polled his legion of social media followers on who he should fight next. – AFP file photo

An announcement on the Fox television broadcast of the Premier Boxing Champions card featuring Jarrett Hurd and Julian Williams confirmed the bout.

Eight-division world champion Pacquiao, 40, is coming off a January victory over American Adrien Broner that took his record to 61-7-2 with 39 knockouts.

In Thurman, he’ll be taking on the WBA’s “super world champion” in the division.

“In the biggest night of boxing this year, boxing’s only eight-division world champion, Senator Manny ‘Pac Man’ Pacquiao, will take on undefeated WBA Welterweight World Champion Keith ‘One Time’ Thurman on Saturday, July 20 in a blockbuster showdown that headlines a Premier Boxing Champions on FOX Sports Pay-Per-View event,” promoters said in a statement.

Pacquiao, who last month polled his legion of social media followers on who he should fight next, took to Twitter to let them know the bout was coming.

Thurman returned from a near two-year layoff to retain his title with a 12-round majority decision over Josesito Lopez on January 26.

The victory saw Thurman improve to 29-0 with 22 wins inside the distance and in the immediate aftermath he said he’d be ready to take on Pacquiao this year.

“Maybe Brooklyn, maybe Vegas, wherever Manny Pacquiao wants it,” Thurman said. “I’d even fight him in the Philippines if I have to.”

Thurman had been idle since edging Danny Garcia by split decision in March of 2017 to unify two 147-pound titles.

The next month he had surgery to remove calcium deposits from his right elbow, and as he was readying to return to the ring he suffered a left hand injury in March of 2018 that forced him to take more time off.

On January 20, Pacquiao battered Broner in a lopsided bout in Las Vegas, winning easily with an impressive display of superior hand speed and destructive power that landed him the unanimous decision over the much younger American at the MGM Grand in Las Vegas.

“I really don’t believe my career is over. I proved it in my last fight against (Lucas) Matthysee,” Pacquiao said after that fight. “And now I prove it again at the age of 40.”

After beating Broner, Pacquiao also called out Floyd Mayweather, who beat the Filipino on points in the world’s richest prize fight in 2015.

Although fans have clamored for a rematch, the unbeaten Mayweather, who is officially retired, hasn’t risen to the bait. – AFP