Saturday, May 30
You are at:Home»Features»Young eye cancer survivor shines brightly 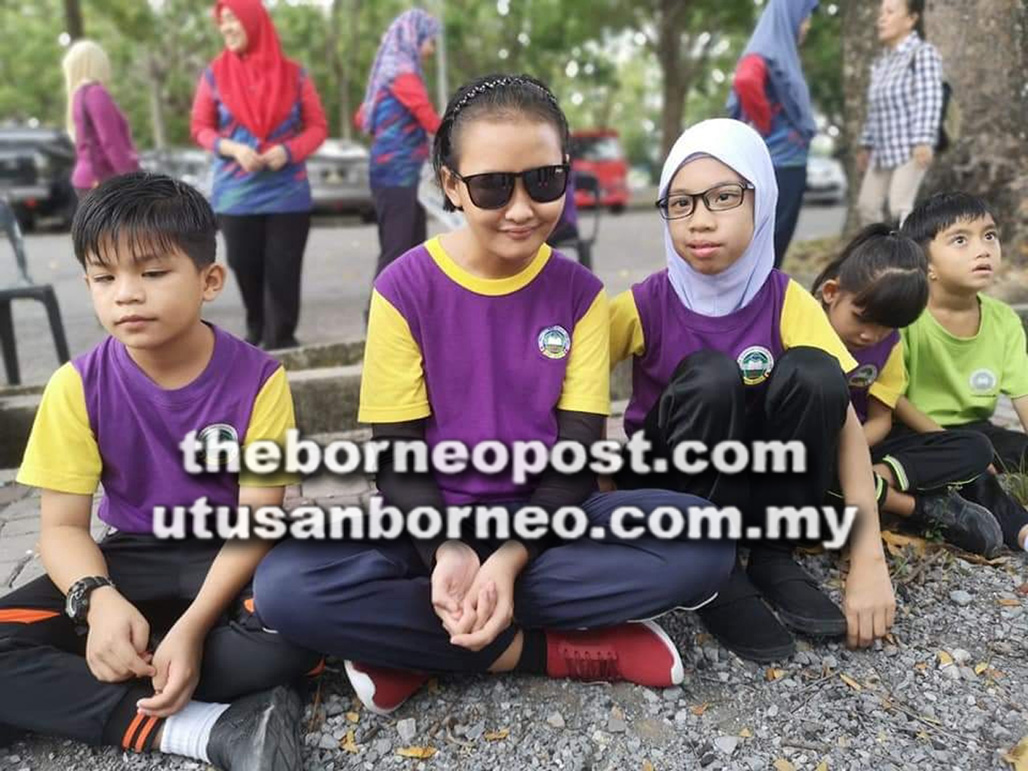 Shirleyllyn (second left) with other pupils during an outing.

A LITTLE girl lost her eyesight at the age of five but her bubbly personality and her courage to dream have lit up her dark world and shone brightly among her sighted peers.

“I love singing and aim to be a music teacher,” enthused Shirleyllyn Ubong Lai Siew Chien, who is now 12.

She said she feels normal as if nothing ever happened – just that she isn’t able to see.

“Most of the time, I listen and feel with my heart. I have sharp ears and nose, you know. I can hear sounds and smell someone from afar,” the Miri lass intimated to thesundaypost. 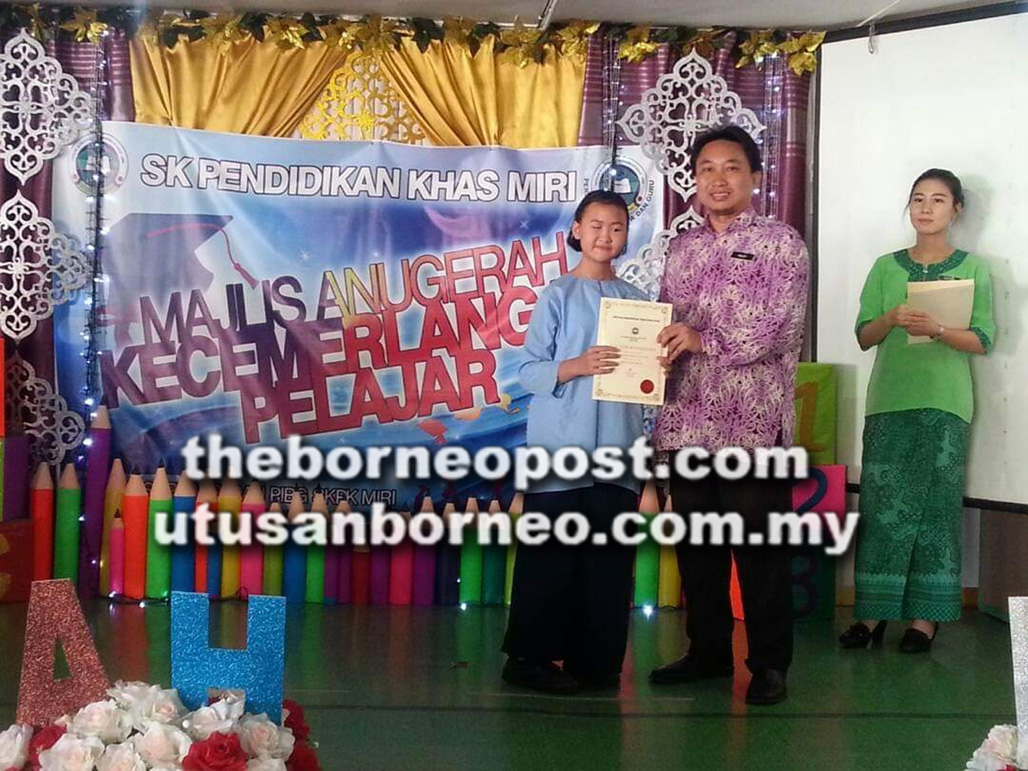 Shirleyllyn receives a certificate for good grades at her school’s excellence awards ceremony.

In 2007, Shirleyllyn was diagnosed with retinoblastoma – an eye cancer that begins in the retina – when she was just two months old after a family member noticed an unusual colour in her right pupil.

At first, her mum, Flora Ubong, did not think much of it but she brought her little girl to see a child specialist anyway.

“The specialist didn’t know what was wrong with her eye. The pupil looked empty. So, he wrote a referral letter for us to go to Miri Hospital.

“But there wasn’t any eye specialist available for us at the hospital – only an ophthalmologist who attended to minor eye problems.

“We were subsequently referred to the Sarawak General Hospital (SGH) in Kuching. That very night, my husband and I drove Shirleyllyn all the way to Kuching from Miri. At SGH, we were told us it was retinoblastoma,” she recalled.

Although it wasn’t certain at the time that the condition was cancerous, a surgery was immediately scheduled and it left the couple in shock.

“Both my husband and I didn’t know how to react to all this. Complete removal of the whole right eye sounded ridiculous to me, so we asked the doctor a lot of questions, hoping to get more answers,” Flora related.

“We were told if we didn’t proceed with the operation immediately, the risk could be more damaging as her brain could be affected, possibly leaving her physically disabled.

“Back then, her condition was already very bad. Her right pupil was already empty. So we decided to proceed to save her life.

“The doctor also said after the surgery, more follow-ups would be needed to monitor her condition. If there were no signs of infection to the other parts of the body and the remaining eye, then it would not be categorised as cancer.” 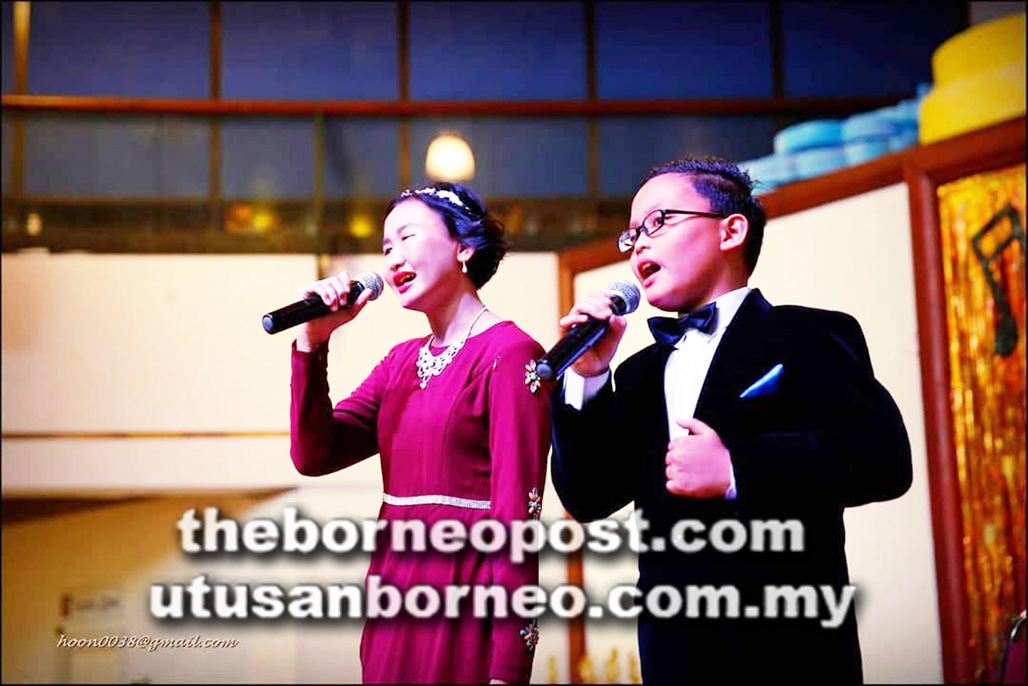 Shirleyllyn and a partner perform during an event.

When Shirleyllyn turned one, her parents took her back to SGH for the scheduled six-monthly check-up. The results from her CT scan and MRI showed her left eye had been infected with cancerous cells.

“The doctors confirmed it was cancer but because it was still early stage, chemotherapy was immediately arranged,” Flora said.

Initially, chemotherapy was for six cycles but increased to nine when doctors noticed Shirleyllyn wasn’t responding well to the treatment.

The whole nine cycles were completed when she was three. After chemo, the cancerous cells were still evident but not life-threatening as the disease was still in the early stage. Monthly follow-ups were needed to closely monitor her condition.

Apart from chemo, Shirleyllyn also had laser therapy to reduce the tumour.

“Unfortunately, her left eye could no longer be saved and the doctor suggested removing it. And it was after both her eyes had been removed that the cancer was gone,” Flora said.

Though she felt sad her daughter had lost her sight, she was at the same time relieved and grateful Shirleyllyn had fought the cancer and survived.

“As parents, it’s devastating to see your child getting sick. But we must have the strength and determination to carry on taking care of our young.” 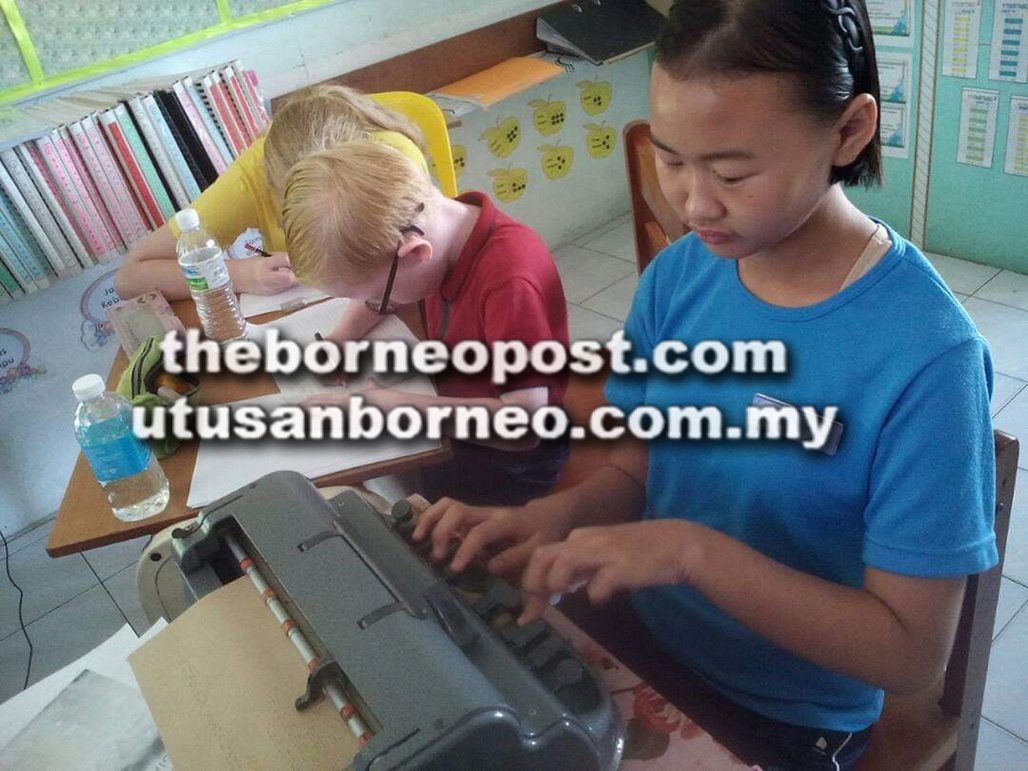 Shirleyllyn uses the Braille typewriter. Her mother Flora says she is a fast learner and able to type at a very fast pace.

Flora is happy that Shirleyllyn’s positive mentality has helped her to adapt.

“Her teachers at Sekolah Pendidikan Khas often tell me Shirleyllyn has high perseverance and done a lot of things she likes, such as sports and singing. She mixes well with her schoolmates and knows how to protect herself.

“I’m proud of her because she never gives excuses for not doing anything because of her condition, but just goes on to do everything she can by herself.

“Probably, it has to do with her bubbly personality, which is why I encourage her to go to school and get involved in school activities. Even though she can’t see, she’s confident in everything she does.” 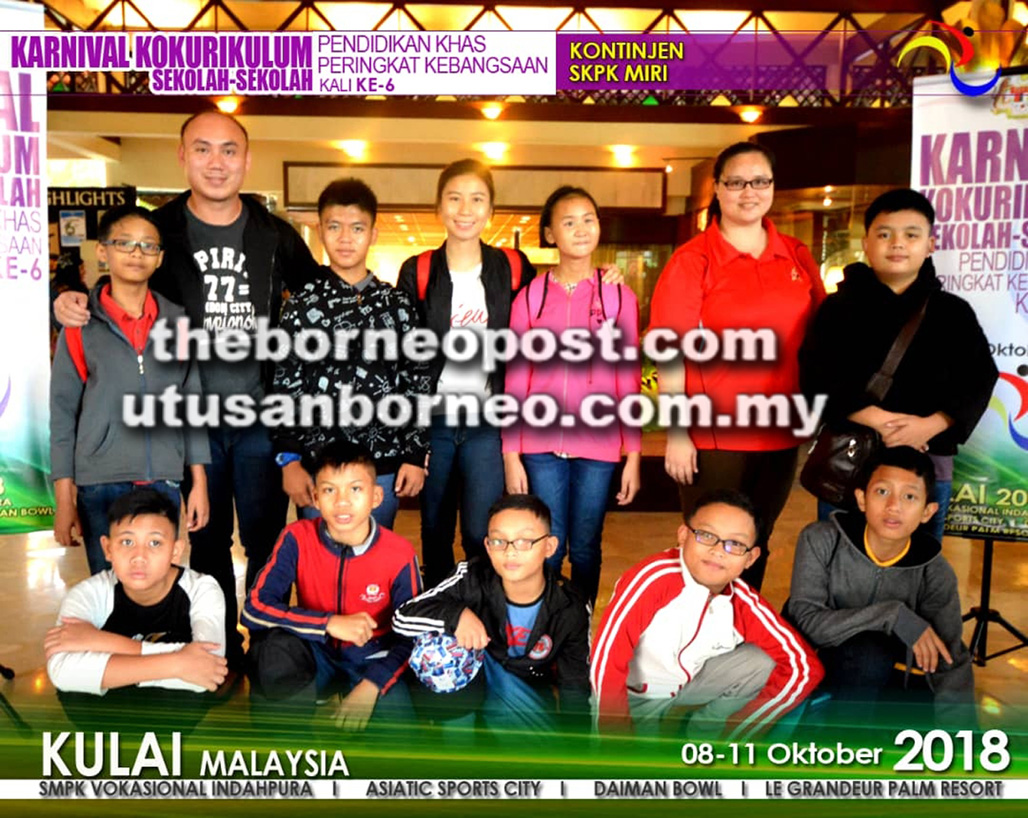 Shirleyllyn (back third right) with her schoolmates and teachers during a trip to Carnival Co-Curriculum in Kulai, Johor, last year.

Asdey, who has been teaching Shirleyllyn since Primary 1, describes her as a bright student.

“Her creativity amazes us. Even though she is blind, her intellectual ability progresses very fast. We thought she might lag behind due to her medical history, but she has proven otherwise. Her development has been amazing because she progresses even faster than the sighted students.

“Her strengths are in language development and communication and the ability to memorise things,” he noted.

Haldy, who is in charge of the student welfare department at Sekolah Pendidikan Khas, said Shirleyllyn is “a very active student”.

“She never makes an issue out her condition. She can answer all questions – very diligent, highly spirited and ambitious. Her hard-working attitude impresses us. She can do a lot of things in class without asking for help,” he
said.

Apart from doing well in her studies, Shirleyllyn is also active in sports, having represented her school since she was eight.

In 2015, she donned Miri colours at a sports meet in Kuching for the physically disabled.

“I was so excited about being able to take part. I think I did well to win a medal in the 100m long jump (an event for the physically disabled),” she beamed.

Shirleyllyn also won a gold medal in the same event at a Sarawak-level sports meet in Kuching last year for physically challenged students.

“It was exciting time for me. I felt confident I could win if I gave my best,” she recalled.

Shirleyllyn is realistic about her situation and does not expect everyone to be sympathetic.

“I have friends who are nice to me. Others are less friendly, so I just stay away from them and focus on positive things,” she said.

Her ambition to teach music was inspired by her music teacher.

“My music teacher Cikgu Fadzli is a good singer. His voice inspires me to sing. My favourite song is ‘You are the Reason’ by Calum Scott.

“My other favourite thing is beading,” she said, adding that both activities have a calming effect on her.

As she cannot see the beads, her younger sister helps her pick out the colours she wants and she would then use the beads to craft a necklace or a bracelet.

Sarawak Children’s Cancer Society (SCCS) president Jocelyn Hee strongly feels Shirleyllyn is an inspiring role model because even at such a young age, she already feels the need to share her story.

“Despite her handicap, she’s just like any normal child who has hopes and dreams and wants to achieve them one day.

“More importantly, she doesn’t let her disabilities get in the way of her ambition. I feel that sharing her story will also inspire other cancer patients to fight on,” Hee said.

Previous ArticleCM, wife bring cheer to Peryatim orphans at ‘buka puasa’ event
Next Article How Myanmar is improving its transportation