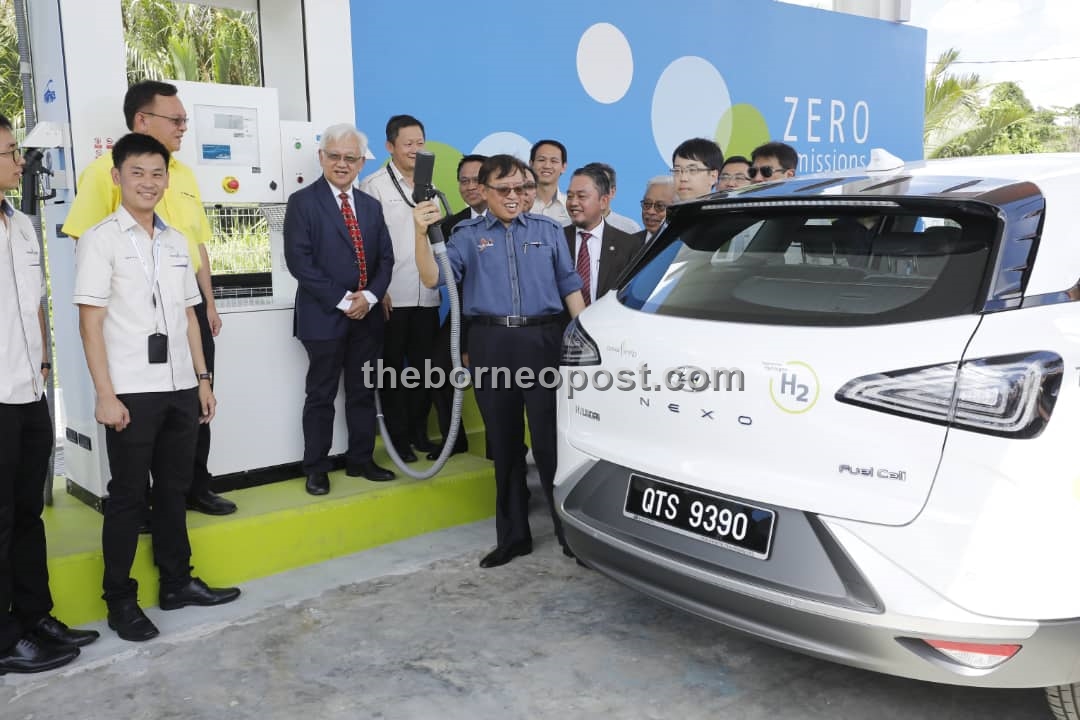 Abang Johari holds up the nozzle before pumping fuel cell into the hydrogen-powered vehicle during the launch. – Photo by Chimon Upon

The integrated hydrogen production plant and refueling station is believed to be the first of its kind in Southeast Asia.

The facility includes a plant built by Sarawak Energy that produces hydrogen through an electro-chemical process called electrolysis as well as a refueling station for Sarawak’s first hydrogen fuel cell electric buses under the ownership and management of Sarawak Economic Development Corporation (SEDC).

The construction and operation of the hydrogen production plant and refueling station were undertaken by Sarawak Energy in collaboration with Linde EOX Sdn Bhd, a subsidiary of Linde Malaysia. The Linde Group is among the world’s leading industrial gases and engineering companies.

Such collaboration provides a platform for knowledge-sharing and transfer of technology, allowing Sarawak Energy to explore in-situ the development of hydrogen as a fuel for the future.

Through the facility, Sarawak Energy is exploring hydrogen’s potential to be part of Sarawak’s energy mix for a green transportation system as well as energy storage with export potential.

In the meantime, SEDC is entrusted to acquire and manage the three hydrogen fuel cell buses for research to improve Sarawak’s green public transportation system.

The production plant is able to produce 130-kilogramme (kg) of hydrogen per day at a purity of 99.999 per cent (five 9s) and is capable of supporting and fully fueling up to five fuel cell buses and 10 fuel cell cars per day.

Hydrogen has zero carbon emission with water and heat being its only by products when used in fuel cells for transportation.

The plant was commissioned on a designed and built basis in accordance to all relevant regulations, codes, standards and best practices referenced from the design and operation of other international world class facilities.