Thursday, May 28
You are at:Home»News»Rabies claims life of 26-year-old man, 17th death since outbreak began 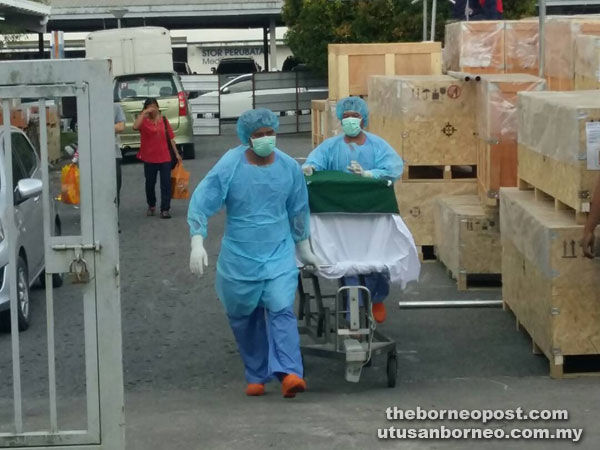 Medical personnel transporting the remains of a previous victim of rabies. The disease has claimed its 17th victim since the first outbreak in June 2017. File Photo

KUCHING: The latest victim to be infected with rabies has succumbed to the virus at around 9am this morning, making him the 17th fatality since the outbreak hit Sarawak.

The deceased, identified as Jackson Yap Foh Fong, 26 from Batu Kawa, was admitted to the Sarawak General Hospital (SGH) on May 25.

The body has been transferred to the hospital’s forensic lab for further action.

So far, Sarawak has recorded 18 cases involving 17 fatalities due to the deadly virus since the outbreak.

Meanwhile, Health Ministry director general Datuk Dr Noor Hisham Abdullah in a statement on Thursday said the man had felt weak and was having breathing difficulties before he was sent to SGH.

Further checks performed on the patient confirmed that he was in a state of confusion, suffering from hydrophobia and having difficulties swallowing.

Dr Noor Hisham also revealed that the patient had a history of being scratched by his pet dog and was not properly treated.

The pet dog died last March after showing signs of hypersalivation, an unsteady gait (an abnormality in walking caused by the disease) and hydrophobia.

The carcass of the dog was disposed improperly, and no report was lodged to the Sarawak Veterinary Services Department.