Saturday, May 28
You are at:Home»News»Nation»Information Ministry considers more documentaries on Dayak tribe 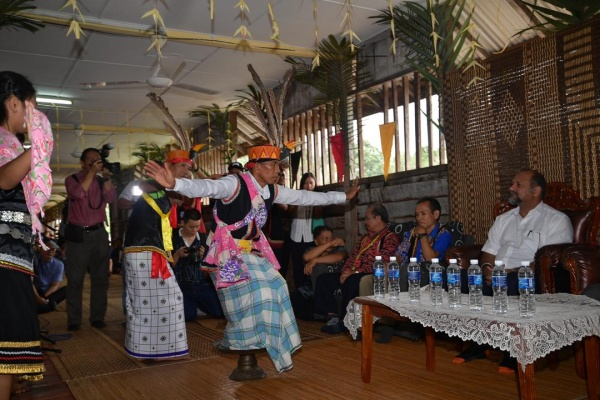 Gobind (right) is entertained by traditional dancers during his visit to Kampung Mujat, Serian. Bernama Photo

SERIAN: The Ministry of Communications and Multimedia will consider airing more local films on the culture and customs of the Dayak tribe on television and radio, said its minister Gobind Singh Deo.

For example, he said, Kampung Mujat near here was a destination that drew many visitors who were attracted to the Bidayuh longhouses that still maintained traditional elements.

“Even more, the village is also historic as it was one of the sites of clashes during the Malaysia-Indonesia Confrontation.

“After this, I will visit two more villages of the Bidayuh tribe,” he said when attending a programme of the Leader With The People at Kampung Mujat, Serian division today.

The longhouse is occupied by about 300 families and had been visited by several important figures including the Prime Minister’s wife Tun Dr Siti Hasmah Mohd Ali, and Finance Minister Lim Guan Eng.

Meanwhile, sharing the same view, Baru said the Federal Government always upheld the aspirations of the races in Sarawak to be shown to the general public throughout the country.

“All customs and traditions found in the longhouses in Sarawak must be shared and the Federal Government always supported such efforts,” he said adding that the matter would be taken to the higher authority.

Earlier, Gobind held the ‘Ngabang Gawai’ for Sarawak freedom fighter and the first Member of Parliament from the Bidayuh tribe with the longest service, Datuk Seri Dominic Dagok at Kampung Pinchi near here.

Dagok, 84, who was touched by the presence of the first federal minister to visit his house, greeted Gobind with a tight hug and said that he was very proud of the gesture and appreciated the time spent with him. – Bernama