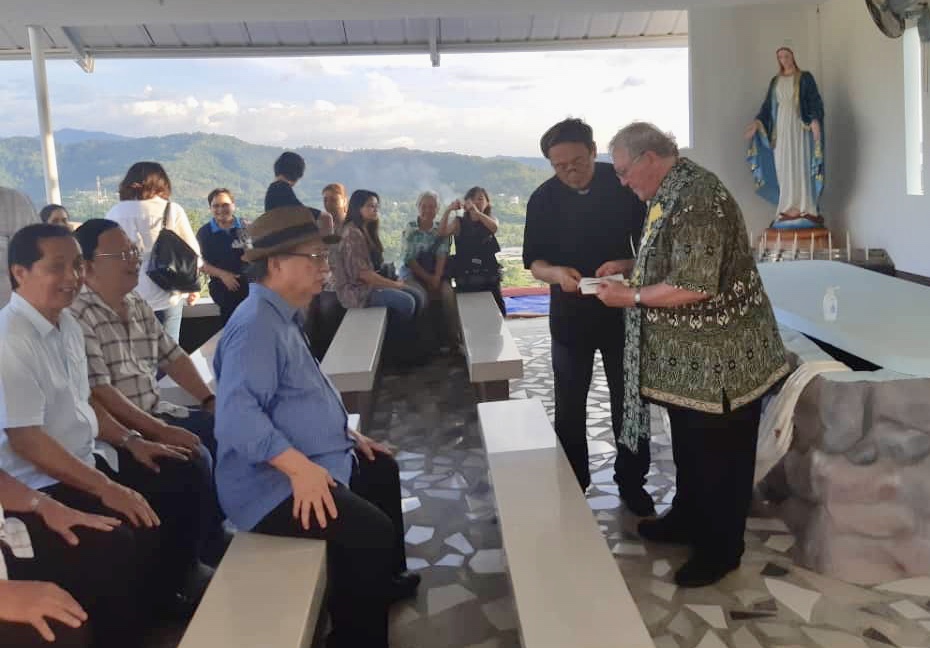 Father Josef and Father Sepp conducting the service at the chapel constructed on Sinundu Hill recently which was attended by local leaders such as Marcus, Bernard, Stephen, Wilfred and others.

PUTATAN: The Sinundu Hill here was once a spot for the surrounding villagers to carry out pagan rituals in the past.

But now, with the installation of a large man-made Jesus Christ statue which overlooks the beautiful view of the South China Sea and city scape of Kota Kinabalu, it is becoming a popular venue for Christian worshippers and pilgrims from both locally and abroad.

The person responsible for the construction, former Putatan MP, Datuk Dr Marcus Makin Mojigoh recounted that in the past, there were only a few baptized Catholics in the area, which was namely a pagan village.

He added however that it was the pagan people who helped build and put up the cross on the hill back in the 1970s.

“In March 1973, the landowner, who is pagan, helped construct the cross,” he said.

Eventually, the place became a site where the communities got baptized and embraced Christianity, he said.

“This hill where the statue and cross are erected is the spot where the pagans received their baptism,” he said in a fellowship gathering to bless the chapel and holy pictures/statues by Father Josef Schmolzer who is from Austria and Father Sepp.

It was also mentioned that the Sinundu Hill was first blessed by Father Florian Judd in 1972, where 35 cathecuments were baptized by him.

Since then, Sinundu Hill has become the centre for the annual Station of the Cross ritual during Lent, by the locals.

Father Josef, who carried out the blessing ceremony with Father Sepp said that he first came to Sabah in 1969 and was met by Father A.G. Lampe on his arrival.

He added that Sabah was his first love and like most first love, it carried a special nostalgia that continued to the present time.

“Everyone’s first love is special, even though it is not realized,” he said.

He recounted the kindness and acceptance of the local community of Tampasak, Tambunan, where he served for three years in a school before being transferred to Keningau as an examination supervisor, and later to Kuching, the Philippines, Austria and Rome.

“I love the people and I love the tapai,” he said, adding that he was always welcomed at ceremonies such as funerals, weddings and other events at the village.

His role while in Sabah, he said, was to help improve development for the state with regard to education for its people.