Friday, July 10
You are at:Home»Sports»Football»Brazil’s Neymar out of Copa America after tearing ankle ligament 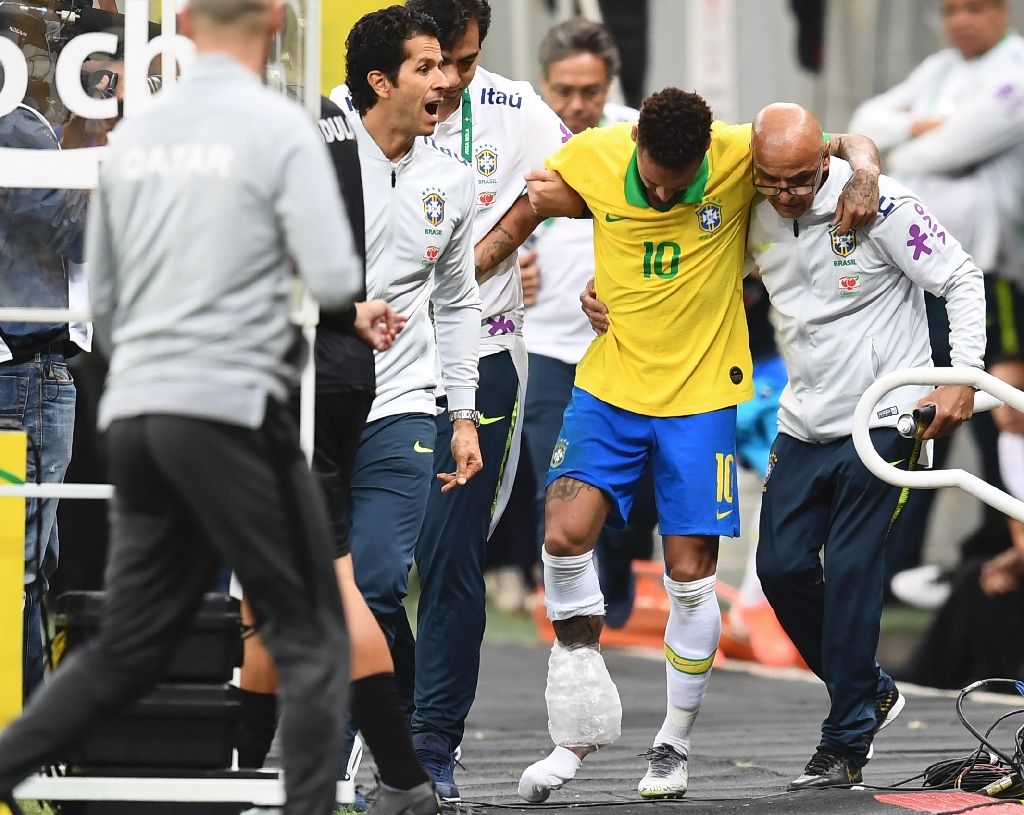 Brazil’s Neymar leaves the pitch injured during a friendly football match against Qatar at the Mane Garrincha stadium in Brasilia ahead of the Copa America. AFP Photo

BRASILIA: Superstar Neymar was ruled out of the Copa America Thursday after tearing his right ankle ligament during Brazil’s 2-0 friendly win over Qatar.

“Due to the seriousness of the injury, Neymar will neither be fit nor have time to recuperate sufficiently to participate” in the tournament, the Brazilian Football Confederation (CBF) said in a statement.

The injury to the world’s most expensive footballer is a big blow to the hosts’ preparations for South American continental championship, which begins in just over a week’s time.

A distraught-looking Neymar was seen covering his face with his hands as he sat on the bench after hobbling from the field in the 20th minute at Brasilia’s Mane Garrincha Stadium on Wednesday night.

A large ice pack had been strapped to the Paris Saint-Germain striker’s lower right leg while two members of Brazil’s support staff carried him from the pitch.

Minutes after Richarlison had opened the scoring in the 17th minute, Neymar was substituted with the CBF saying he had suffered “a ligament rupture at the level of the right ankle”.

With Neymar ruled out, the host nation face an uphill battle to win South America’s continental championship for the first time since 2007.

Neymar’s ankle injury was just the latest twist in the soap opera surrounding the striker, who has dominated headlines in Brazil since Saturday after a woman accused him of raping her in a Paris hotel.

Neymar has strongly denied the allegations, published intimate images on social media in his defence and had continued to train with his Brazilian team-mates for the Copa America, which kicks off June 14.

Earlier on Wednesday, the CBF president Rogerio Caboclo had insisted for the second time this week that Neymar would play in the Copa America despite the seriousness of the allegations.

Caboclo’s assurances, who cost PSG a world record fee of 222 million euros ($248 million) in 2017, came after CBF vice president Francisco Noveletto was quoted by Brazilian media Tuesday as saying he was willing to “bet” that Neymar would quit.

“He doesn’t have the psychological condition to face the Copa America and journalists,” Noveletto said.

Caboclo responded by saying Noveletto did not speak “for the CBF,” Globoesporte.com said.

Hours ahead of Brazil’s friendly against Qatar in Brasilia Wednesday, far-right President Jair Bolsonaro offered his public backing for the embattled player.

“He’s going through a difficult moment but I believe him,” said Bolsonaro.

At a news conference Monday, national coach Tite was bombarded with questions about the affair and its effect on the squad.

Attempting to sidestep the issue, Tite said he would “not judge” Neymar, who he said was “indispensable” to the team, but not “irreplaceable” either.

The scandal caps a troubled season for the player, on and off the field. It has been marred by a recurring injury, two separate suspensions for insulting a referee and hitting a fan, and the loss of Brazil’s captaincy. – AFP