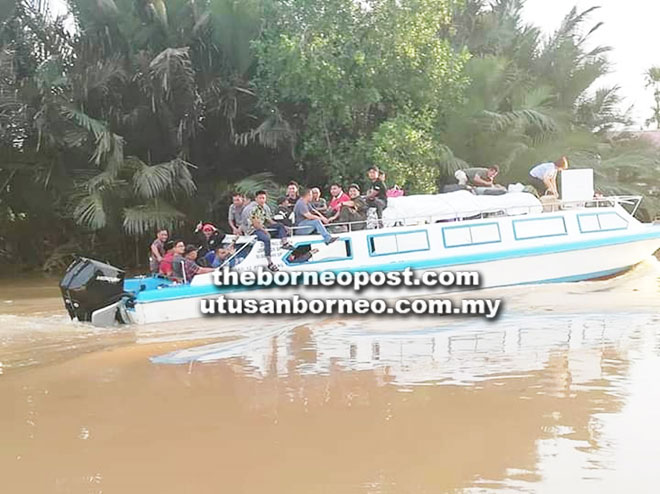 A close-up view of passengers sitting on the roof of the speed boat.

SIBU: Sarawak Rivers Board (SRB) has compounded a speed boat operator for carrying more passengers than permitted following a posting on Facebook showing the offence.

SRB Sibu assistant controller Hatta Morshidi revealed that a police report has also been lodged when asked to verify a Facebook post showing passengers sitting on the roof of a speed boat that had gone viral.

He said clarification from personnel in Daro confirmed the photos as true, adding that the speed boat is only allowed a maximum of 12 passengers.

“It happened this morning (yesterday). My staff tried to stop the passengers from going on board and talked to the skipper, but it fell on deaf ears.

“Our facility in Daro is open with no terminal building to impose ‘no ticket no entry’ concept. The overwhelming crowd was very difficult to control. We can only issue a compound and make a police report,” Hatta responded.

Meanwhile, during the first phase of an integrated operation from May 24 to 31, the board had issued two compounds for not toeing the line on safety requirement.

The second phase of the operation is running from June 3 to 9.

Previous ArticleApply for govt funds online without hassle
Next Article Is your business ready to ride the e-wallet wave?