Friday, October 7
You are at:Home»Features»Fading blips of Sibuti River fireflies

The fireflies will come out to illuminate the display trees along the riverbank at night. 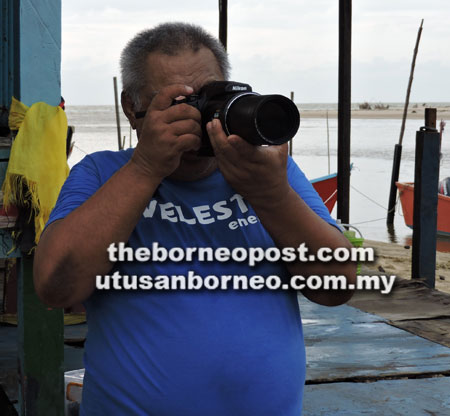 Musa shoots a riverine scene during the boat trip upstream.

IT was definitely a night to remember for the seven of us who went on a two-hour river cruise up the Sibuti River to survey and study fireflies.

The day started ominously with an overcast sky. Rain-laden clouds, building up on the horizon, soon released their ponderous load and blew up a storm from Miri to Bekenu-Sibuti.

Part of the team comprising Malaysian Nature Society (MNS) leader Musa Musbah and his vanguard group were already out of coverage range as they converged in Kuala Sibuti to conduct a briefing. 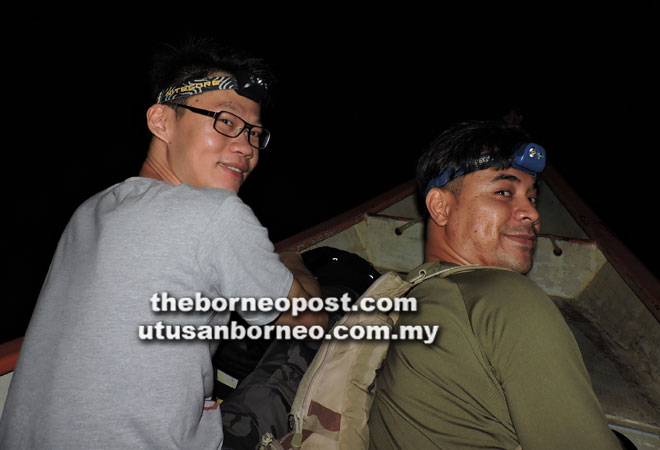 Jaimie and Frankie, the younger members of the survey team.

We, the support team from Miri, decided to proceed, braving the heavy rain and hoping for the best. The dark skies were anything but promising, dumping more rain onto the road, making it very slippery.

But the drencher did not throw a damper on the survey. It remained on target to document the fireflies of Sibuti River before they wax a distant memory.

By 5pm, the skies had cleared and the atmosphere freshened by the gentle sea breeze. Part of the group went birding beyond the Kampung Kuala Sibuti, while the rest mingled with the Velesto team, conducting their corporate social responsibility (CSR) initiative at the community hall. 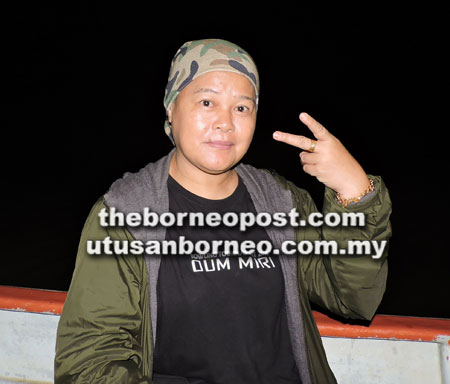 Abibah – one of the survey team members.

After that, the MNS surveyors regrouped for some sunset photography on the beach while waiting for nightfall, and the fireflies to make their ‘grand entrance’ – hopefully.

Velesto, an oil and gas company, had chosen Kampung Kuala Sibuti for their 2019 CSR undertaking. They gave away 67 fire extinguishers to each of the families and invited MNS Miri to jointly conduct some of the activities over two days.

Musa led 30 excited young children for a nature walk and birding outing. The cheerful kampung children enjoyed the beach trekking and the exposure to other MNS-organised recreational activities and lessons on survival.

Apart from firefighting, the youngsters also learned about road safety. Kampung Kuala Sibuti is situated far from major roads and linked to the outside world by a small tarred road.

Although four-wheel drive vehicles, sedan cars, motorcycles, and bicycles are commonly seen in the kampung, awareness of road hazards among the children is still low.

The use of chemical fertilisers and pesticides are causing the firefly population to dwindle. To counter this, the use of bio-fertilisers is encouraged.

Culturally, the nipah trees have long been a source of culinary needs of the kampung folk. The roots are important to the stability of the Sibuti River, one of the richest udang galah breeding grounds in the area.

As thesundaypost gathered, the natural habitats of nipah palms, api api, and pedada trees must not be disturbed.

The kampung has been home to many fishermen and their families over the past 30 years or more.

The ketua kampung was very forthcoming when approached about the research on the ecosystem in Kuala Sibuti.

A former Shell employee, he was most helpful to the MNS survey team. He was happy they had been able shared the two-day activities with Telesto.

“Indeed, it’s very important for the local population – and even the oil palm plantation owners and workers – to be more aware of the importance of the river ecosystems in Sarawak,” said Musa.

“Relevant organisations should get involved in raising awareness through training and knowledge-sharing. We can help, if needed.”

As dusk set in, I went with the MNS team in a specially hired fishing boat to view the fireflies. In the first 15 minutes, there was a heightened sense of anticipation when the display trees started showing signs of the presence of a small number of glowing insects.

Musa briefed the team and delegated the work. Recordings of sightings began from the moment the boat started upriver from the river mouth.

Fairy lights were dancing among the trees as if someone had switched on the power. Lights were glistening on both sides of the river while the skies twinkled with millions of stars.

The rain didn’t prevent the fireflies from coming out – as if to bid us a luminescent welcome.

For many years, people have been worried about the declining numbers of fireflies in Northern Sarawak. The banks of Miri River used to pulsate with the lights by these insects at night and many 60-something residents say they miss the sparkling display.

Musa said the main cause of their disappearance was conversion of their habitats for agricultural purposes. 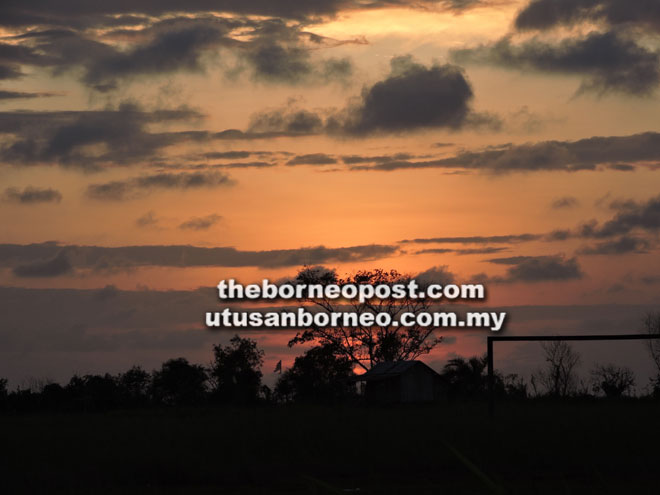 Setting out after a lovely sunset.

“Fireflies lay their eggs on the trunks of trees like api api, pedada, and nipah palms standing just above the level of the highest tide. After hatching, the larvae will feed on the slime of snails. Thus, fireflies are a good indicator of the ecosystem’s health,” he added.

The survey collected firefly samples at several points along the river. Water and air temperatures, water PH levels, and coordinates of the sampling areas were all recorded and photographed.

According to Musa, the fireflies can be found congregating up to 100 metres inland from the riverbanks where they breed. The sort of display at these congregating areas would truly be surreal.

Malaysia is the heart of the firefly region, stretching from India to Papua New Guinea. There are over 20 species in the world and Malaysia has seven. The most familiar one is Pteroptyx tener, also known as congregating or synchronous fireflies. They attract many tourists from distant lands.

Kuala Selangor, for example, has been the centre of a lucrative firefly-watching business for tourists since the 1980s. But agro-economic development has drastically reduced the firefly population in the area.

Since 2010, MNS Miri has undertaken several data-gathering field studies to get a clearer picture of firefly locations in Sarawak as well as collect samples for identification purposes.

The two-hour survey was a fact-finding mission to gauge the extent of firefly ‘displays’ on api-api and pedada trees, and nipah or apong palms.

Some white-coloured birds flew past the boat, a few owls hooted under cover of night, while the raucous call of a blue heron echoed from afar.

Three boats were out fishing for udang galah, the famous big-headed river prawns of Sarawak. It’s good to know the river is still healthy with some migratory birds still coming on shore.

The stilted roots of the mangroves, the eerie looks of the nipah palm root system, and the sighting of crocodiles all made the evening’s cruise very exciting.

It’s sad to imagine, perhaps, a few years down the road, only a very small number of fireflies will light up the riverbanks with their throbbing blips.

At first, the team caught sight of the display trees at sporadic intervals. It wasn’t very encouraging but the members remained quietly confident as Musa briefed them on their individual roles.

Taking a frontal position, Frankie and Jaimie had to reach out to the leaves to collect firefly samples. They had to be watchful in case a snake may coil in wait on a bough overhead.

The boat had to go under the branches, sometimes brushing against mangrove roots, to let Frankie and Jaimie collect the samples.

The lower river temperature is suitable for fireflies to lay their eggs. These nocturnal luminescent beetles are stressed by droughts and heat waves which destroy the eggs and larvae. Even displays on trees can be delayed by heat stress.

The team was fortunate to see a good display. According to Musa, the best show time is before 10pm on a moonlit night or the river mist will keep the fireflies away.

We felt as if we were sailing in a lake full of magical lights. If this could be a regular tourist cruise, Mirians would, indeed, be a fortunate lot for not many people, in recent years, have seen such fabulous displays. Still, we don’t have to go to Japan or Taiwan to see fireflies!

Also on the survey team were Abibah Ani, Steve Dexter, Khuzaimi, and Zainal.

With the bright moon overhead, we felt quite happy with the results. The river was warm and nothing untoward happened.

While passing the boats of some prawn fishermen, we hollered a few friendly greetings. The kampung folk could look forward to a good harvest of udang galah in the morning.

Some of the VIPs guests might even be able to bring frozen udang galah back to Kuala Lumpur.

As our boat reached the sandy bank of the kampung, we heard the sounds of gendang and saw men and women berpantun in the community hall to entertain the visiting dignitaries.

The aroma of barbecue offerings wafted from the dining hall as more guests and kampong folks started to arrive.

In our hearts, we said a prayer, “Dear God, please help us bring back the magic of the fireflies and these wondrous creations.” 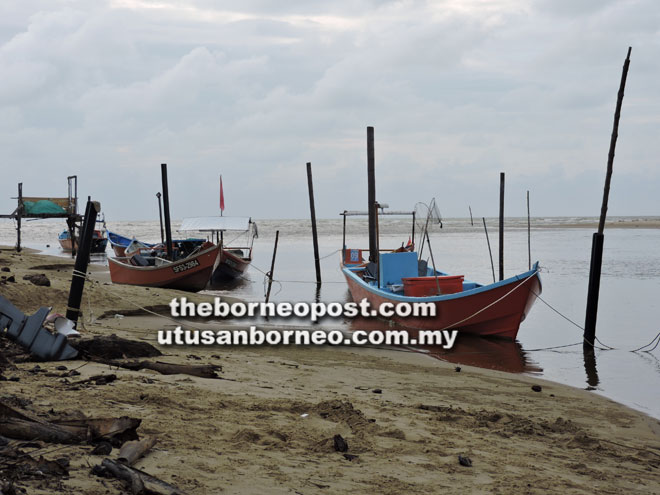 One of these boats took the survey team up river.