Friday, June 5
You are at:Home»Health & Environment»Canada to ban single-use plastics from 2021 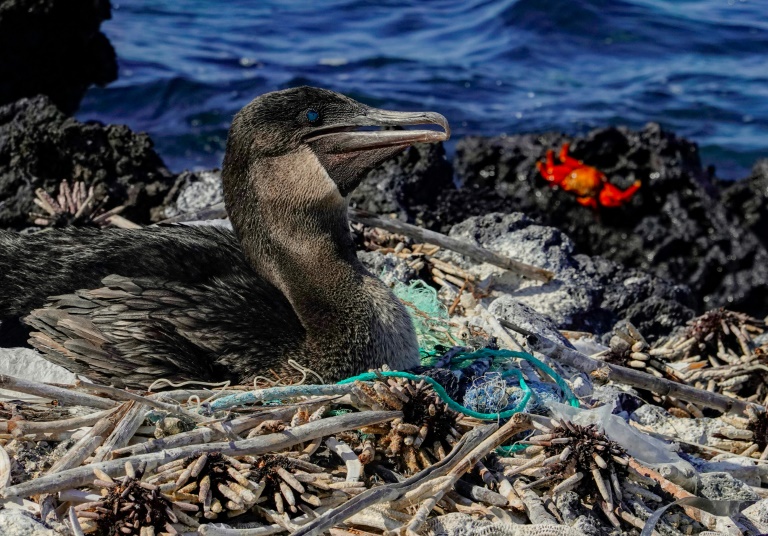 A flightless cormorant sits on her nest surrounded by plastic waste on a remote island off the coast of Ecuador. – AFP file photo

Canada will ban single-use plastics from 2021, Prime Minister Justin Trudeau announced Monday, declaring it a “global challenge” to phase out the plastic bags, straws and cutlery clogging the world’s oceans.

“I am very pleased to announce that as early as 2021, Canada will ban harmful, single-use plastics from coast to coast,” Trudeau said, arguing Canada has a unique chance to lead the fight against plastic pollution as the country with the world’s longest coastlines.

Less than 10 percent of plastics used in Canada are currently recycled, he said.

Each year, a million birds and more than 100,000 marine mammals worldwide are injured or killed by becoming entangled in plastic or ingesting it through the food chain.

Single-use items represent about 70 percent of the plastic waste littering the marine environment.

Straws, plastic bags, cutlery, plates and stir sticks would be among the items banned, a government statement said. The list will be refined based on further scientific research between now and 2021.

Trudeau said it is “tough” trying to explain the problem to his own children.

“How do you explain dead whales washing up on beaches around the world, their stomachs jam-packed with plastic bags?” he said.

The environmental group Greenpeace called the government’s announcement “the first step” but said ultimately Canada needs to move towards phasing out a wider array of “all non-essential plastics.”

It called for quick action “so this announcement isn’t a single-use election promise.”

The environment is shaping up as an issue in Canadian legislative elections set for October.

If he wins the election, Scheer vows to roll back environmental protections, including a federal carbon tax and a tanker traffic ban along a pristine part of the Pacific coast.

“I think it’s stupid to have a straw for five minutes for a latte or whatever and then it goes in the ocean. I mean come on, give me a break. This is not necessary,” a man who gave his name as John said.

“If it is banned, we are going to learn” how to deal with it, “for future generations,” said Evelyn, another resident.

Trudeau said producers of other plastics — such as bottles or food packaging — will be held responsible for “the entire life-cycle” of their products.

Both plastic manufacturers and the companies using their products, as in packing materials, will have to provide recycling plans.

Canada, France, Germany, Britain and Italy, along with the European Union, subscribed at last year’s G7 summit in Quebec to a new charter against pollution in the world’s oceans.

The United States and Japan did not join the pact.

The non-binding Ocean Plastics Charter called on participating countries and the EU to commit to making all plastics reusable, recyclable or recovered by 2030.

A total of 21 governments have by now taken that pledge, Trudeau said. In addition, the EU earlier this year passed legislation to ban single-use plastic products starting in 2021.

Several Canadian cities already ban the use of plastic bags and some provinces have banned other products.

But Trudeau said a “national solution” was needed.

“Every year, Canadians throw away over three million tons of plastic waste,” he said in a statement. “This represents up to $8 billion per year in lost value and wastes valuable resources and energy.”

Recycling would not only cut down on pollution but would help produce 42,000 jobs in the recycling and recovery businesses, the prime minister said.

While Trudeau has declared it a top priority, a recent parliamentary report concluded Canada is doing too little to combat climate change, even as government scientists warned the country was warming at twice the global rate. – AFP

Previous ArticleLight exposure during sleep linked to weight gain in women: study
Next Article Be alert, 93 pct of poisoning cases occur at home