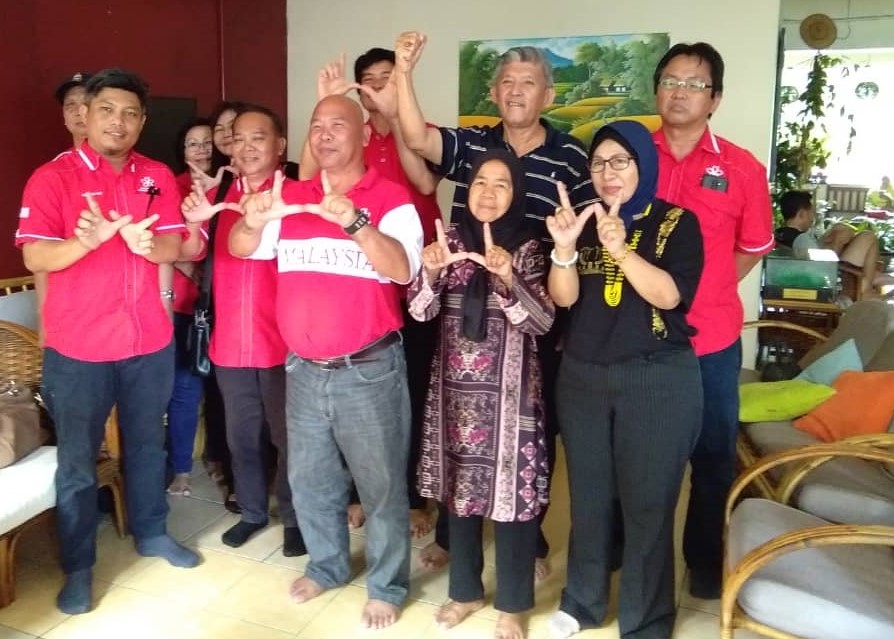 Thomas with the earliest Bersatu protem divisional chiefs in Sabah.

KOTA KINABALU: A group, claiming to be the earliest activators of Parti Pribumi Bersatu Malaysia (PPBM) or Bersatu in Sabah led by Datuk Thomas Mojuga Tukung yesterday announced their decision to quit the party.

After an emergency meeting chaired by Thomas yesterday, the group unanimously rejected the appointment of Datuk Seri Hajiji Noor as Sabah Bersatu leader.

According to a statement from the group, they are planning to join Parti Warisan.

“Our group was the earliest team to bring Bersatu to Sabah. We were centralised in Pulai, Johor Bharu through divisional chief, Yacob Atan. Before the 14th general election we had actively campaigned for Bersatu, then an opposition party, to ensure that Barisan Nasional lost their power. I personally registered some 18,000 members in the Kudat parliamentary constituency.

“The Bersatu leadership had promised not to accept Umno members nor giving them any position, but, sadly, they are stabbing us at the back. In fact, an Umno member was appointed as Bersatu leader,” he lamented.

Thomas added that the group was disappointed for not being appreciated, especially when Sabah protem communication chief, Datuk Sahran Untai, together with the earliest activators, were excluded by the ‘new’ Sabah Bersatu.

“As of today, a total of 260 protem division chiefs, Serikandi and Armada chiefs have decided to quit the party because we are disappointed with the decision made by the central leadership. We are unanimous in wanting to join Warisan under the leadership of its president, Datuk Seri Panglima Shafie Apdal,” he stressed.

According to Marianie, during the last election, Pulai Bersatu had worked closely with Warisan to fight Umno in Sabah.

“We joined Bersatu under Pulai because we wanted to help Warisan campaign. At that time, Bersatu has not spread its wings to Sabah. We were still under Pulai when the process of bringing Bersatu to Sabah was initiated,” she said.

She added that their struggle was based on the fact that they want Barisan Nasional to lose, but became disappointed when the new leaders appointed in Sabah are the same Umno faces.