Sunday, July 12
You are at:Home»News»‘Haziq told me it’s not him in confession video’ 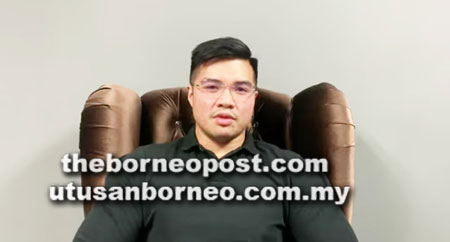 A screen grab of the man who identified himself in the confession video as Haziq Aziz.

KUCHING: PKR Santubong chairman Ahmad Nazib Johari has denied that the individual who confessed to being the person engaged in sexual acts with a man resembling a federal minister, was the branch’s Youth chief Haziq Abdullah Abdul Aziz.

In a Facebook Live video broadcast at 4.30pm yesterday, he said he had contacted Haziq and that the latter had vehemently denied to being the individual in the confession video.

“In addition, I had also contacted close friends of Haziq who texted him and got the same response – that he denied being in the (confession) video. After taking a more detailed look at the video, I can say that the ‘Haziq’ in the video and real life are very different.

“I had also visited Haziq for Hari Raya Aidilfitri three days ago, and from a physical aspect, Haziq is very different in real life and in the video – from the head and body movements, which are quite stiff (in the video), as well as his body.

“Haziq’s body is not as ‘sado’ (fit) as the guy in the video and his hair is shorter (than the person in the video) as well,” Ahmad Nazib said when describing the principal private secretary to Deputy Minister of Primary Industries and Commodities Datuk Seri Shamsul Iskandar Mohd Akin.

He added that he has known Haziq – a lawyer – since seven years ago, and described him as an educated person who possesses a good personality, is religious, disciplined and with good principles, and has a decent family background.

In an earlier statement yesterday, Ahmad Nazib claimed that Haziq’s Facebook account had been hacked, intimating that someone other than Haziq had uploaded the confession video without the account owner’s knowledge.

In the video, the person first identified himself as ‘Haziq Aziz’ before confessing to being one of two men in the gay sex videos which had gone viral a day earlier.

“I, Haziq Aziz, (am) making a sworn confession that I am the individual with (the federal minister) in the video which went viral yesterday (Tuesday).

“The video was taken without my permission on May 11 during the Sandakan by-election in (the federal minister’s) room at Hotel Four Points.

“I urge the MACC (Malaysian Anti-Corruption Commission) to probe (the federal minister) for corruption. He is not an individual who is qualified to be a leader,” said the person in the confession video.