Tuesday, July 7
You are at:Home»World»Pressure grows on Hong Kong over extradition bill 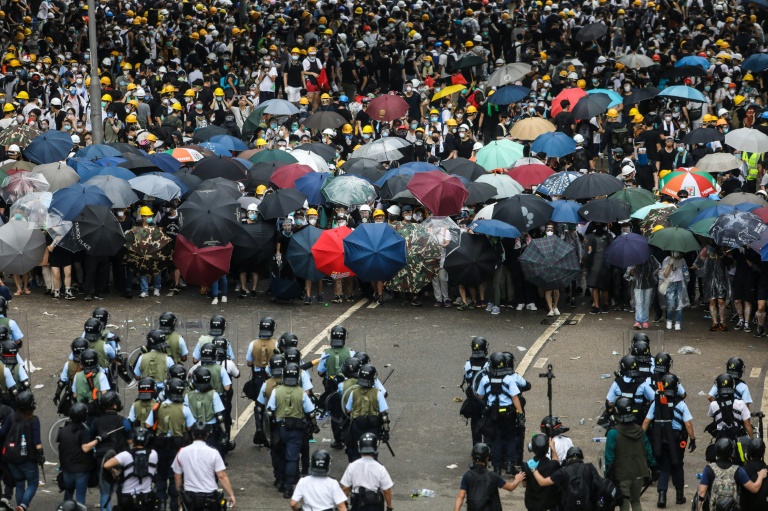 Protesters face off with police outside government headquarters on Wednesday. – AFP file photo

Hong Kong was facing international pressure Thursday over a divisive extradition bill that sparked violent protests, as a top legal body said police tactics to clear demonstrators may have been unlawful.

Police used rubber bullets and tear gas to break up crowds Wednesday after demonstrators — angry over legislation they say would leave people vulnerable to China’s politicised justice system — blocked roads and brought the city to a standstill.

The European Union called for the “fundamental right” of Hong Kongers to assemble and express themselves to be respected as it became the latest grouping to add its voice to a growing chorus of criticism of the bill.

The EU “shares many of the concerns raised by citizens of Hong Kong regarding the government’s proposed extradition reforms”, it said.

The bloc said the proposed law had “potentially far-reaching consequences for Hong Kong and its people, for EU and foreign citizens, as well as for business confidence in Hong Kong”.

Demonstrators who surrounded the city’s Legislative Council — its government — on Wednesday forced a postponement of the next reading of the bill.

But Hong Kong’s pro-Beijing leader Carrie Lam has shown no signs of backing down, and said the protests were “organised riots”.

Wednesday’s violence left 79 people hurt, with two in a serious condition, in the worst political unrest since Hong Kong was handed back to China in 1997.

Although most of the protesters appeared to have melted away Thursday, a defiant group of a few hundred gathered in a central park and chanted abuse at a line of police.

As police started to pack away some of the barricades, some young people returned to help clear up the mess, with umbrellas, water bottles and assorted rubbish littering the streets where protesters had squared off against police the day before.

Activists remained vocal on social media and online groups, however, vowing to be back for more protests in the future.

The police have faced criticism from a range of influential bodies including lawmakers, journalists and legal groups, with calls for an independent inquiry into “excessive force” from one legal committee.

The Hong Kong Bar Association said the police “may well have overstepped its lawful powers” with “wholly unnecessary force against largely unarmed protesters who did not appear to pose any immediate threat to the police or the public”.

Tensions remained high across the city on Thursday, with some small scuffles between protesters and police and several hundred demonstrators gathering in a central park and facing off against a line of police.

Students, democracy campaigners, religious groups and business representatives in the semi-autonomous territory have spoken out against the extradition bill.

The government says it is necessary to fix a loophole that prevents Hong Kong from sending criminal suspects back to jurisdictions they have fled — including to mainland China.

But opponents say it would be abused by an increasingly assertive Beijing to pursue its political enemies and to ensnare dissidents in an opaque and politically motivated justice system.

British Prime Minister Theresa May said it was vital the proposed law did not breach the Sino-British Joint Declaration signed in 1984 setting out the terms of the city’s return to China.

Speaking in parliament, she said her government was concerned about the “potential effects of these proposals particularly, obviously given the large number of British citizens there are in Hong Kong”.

US President Donald Trump told reporters in Washington he could “understand the reason for the demonstration” and said he hoped “it all works out for China and for Hong Kong”.

After forcefully clearing the streets on Wednesday night, police appeared determined to keep control of the business hub.

The adjacent high-end Pacific Place shopping mall was also closed, and staff working in the central government administrative building were told the offices would be closed Thursday and Friday. – AFP