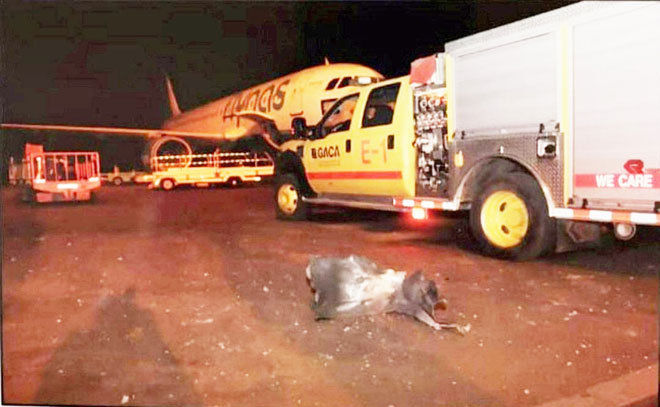 Debris is seen at Saudi Arabia’s Abha airport after it was attacked by Yemen’s Houthi group in Abha, Saudi Arabia. — Reuters photo

RIYADH: A Yemeni rebel missile attack on an airport in southwestern Saudi Arabia wounded 26 civilians on Wednesday, drawing promises of ‘stern action’ from the Saudi-led coalition fighting the rebels.

Yemen’s Huthi rebels, who have faced persistent coalition bombing since March 2015 that has exacted a heavy civilian death toll, have stepped up missile and drone attacks across the border in recent weeks.

Wednesday’s missile strike hit the civil airport in the mountain resort of Abha, which is a popular summer getaway for Saudis seeking escape from the searing heat of Riyadh or Jeddah.

Eight of the wounded were admitted to hospital, coalition spokesman Turki al-Malki said.

The other 18 were discharged after receiving first aid, he added in a statement carried by the official Saudi Press Agency.

The missile reportedly caused some damage to the airport’s arrivals lounge and flights were disrupted for several hours before returning to normal.

At least one Indian and a Yemeni were among three women wounded along with two Saudi children, said Malki, adding the ‘terrorist attack’ on a civilian target could be considered a “war crime”.

Malki said the coalition would “take stern action” to deter the rebels and protect civilians.

The attack was condemned by the United Arab Emirates and Yemen, whose information minister Muammar al-Iryani alleged the strike was carried out “under the supervision of Iranian experts”.

The European Union said “such provocative attacks pose a threat to regional security and undermine the UN-led political process in Yemen”.

France also condemned the strike and called on “all parties to refrain from any escalation that could further destabilise the region”.

The rebels said they had launched a missile at Abha airport but insisted they had the right to defend themselves in the face of years of Saudi-led bombing, and an air and sea blockade.

“The continuation of the aggression and siege on Yemen for the fifth year, the closure of Sanaa airport and the rejection of a political solution make it inevitable for our people to defend themselves,” Huthi spokesman Mohammed Abdulsalam said in a statement reported by the rebels’ Al-Masirah television.

A rebel military spokesman threatened to attack the airports of “countries of aggression”, referring to Saudi Arabia and the UAE, and warned the public to stay away from them.

There has been a spate of cross-border attacks by the rebels in recent weeks which have coincided with reports of intensified coalition strikes on rebel strongholds on the other side of the border.

The city, not far east of Abha, houses a major airbase that has been one of the main launchpads for the coalition’s bombing campaign in Yemen.

Last month, the Saudi air force shot down a rebel drone that targeted Jizan airport, on the Red Sea coast close to the Yemeni border, the coalition said.

The rebel attacks come as Saudi state media reported the coalition was intensifying its air raids on rebel positions in the northern Yemeni province of Hajjah.

In May, the Shiite Huthi rebels also carried out twin drone attacks on the kingdom’s strategic east-west oil pipeline, forcing a two-day closure of the main diversionary route for Saudi exports avoiding the Gulf.

Riyadh accused its regional arch foe Iran of having a hand in that attack and it levelled a similar allegation over the airport strike. — AFP