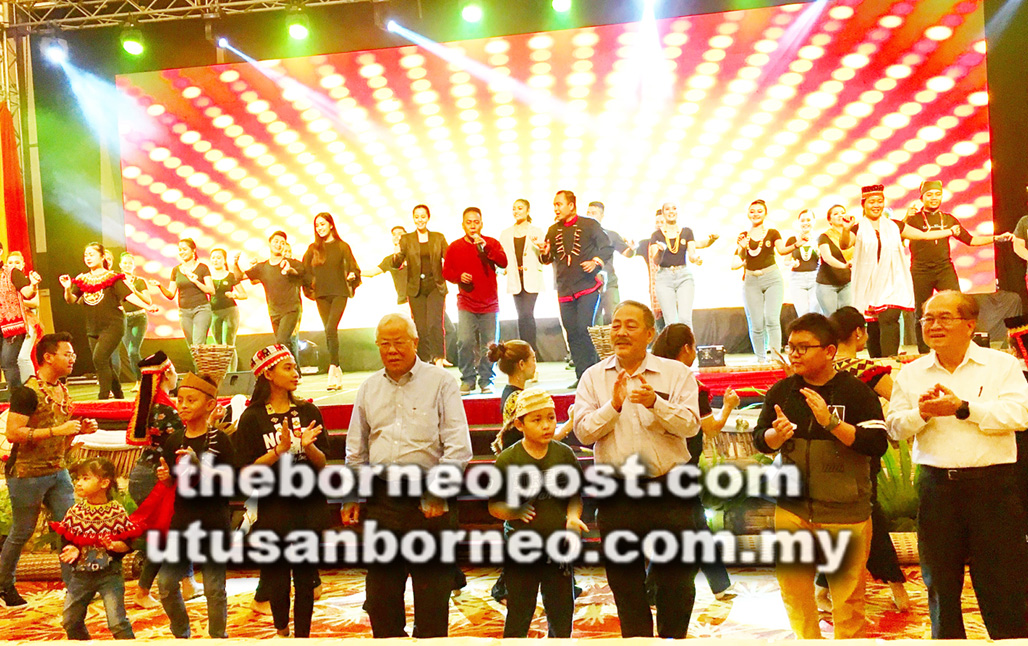 (From left) Manyin, Sagah and Uggah join performers and dancers for the final dance.

KUCHING: It is all systems go for the state-level Gawai dinner at Imperial Hotel tonight (June 15), following the successful final rehearsal yesterday.

Chairman of the main organising committee who is Deputy Chief Minister Datuk Amar Douglas Uggah, who came for the final rehearsal, said he was impressed with the high spirits shown by the performers and all those involved in the event.

He also thanked the working committee chairman, who is Minister of Education, Science and Technological Research Dato Sri Michael Manyin, for leading the preparations to make this year’s state-level Gawai a memorable one.

“Let us show that we Dayaks are an advanced community, tomorrow night.

“I hope you will put up a grand show tomorrow, like what you have shown during this rehearsal,” he said in his remarks at the end of the rehearsal.

Manyin also hoped the dinner would be a showcase of what Dayaks are capable to do and achieve.

The Bidayuh community is the host for this year’s state-level celebration.

Meanwhile, there will be an elaborate Bidayuh traditional performances and ceremonies, as well as performances by singers such as Harry Acid Rain, Melissa Francis and Jolly Jengan during the dinner.

They will be joined by nine others namely three each Dayung Sangon (Bidayuh), Kumang Gawai (Iban) and Keligits (Orang Ulu).