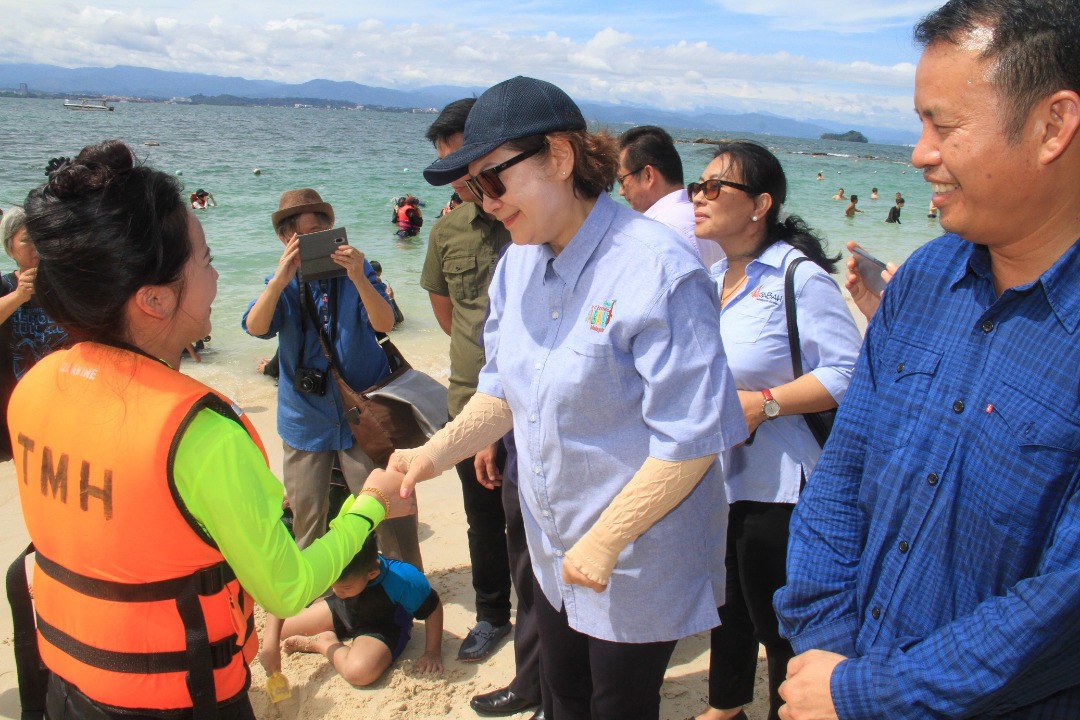 Christina greeting one of the tourists at Mamutik Island yesterday

KOTA KINABALU: The State Government has received several proposals from private investors who are interested in developing the islands in the Tunku Abdul Rahman Park.

Tourism, Culture and Environment Minister Datuk Christina Liew revealed the private investors had submitted their proposals to her ministry and that the investors were looking into building new chalets, jetties and other facilities for the said islands.

Speaking to reporters during her surprise visit to the islands under the Tunku Abdul Rahman Park yesterday, Christina said that the proposals came from very ‘established’ tourism players.

“I will refer this to the Sabah Parks Board of Trustees for them to study the background of the investors… I do receive proposals but I don’t make the decision,” said Christina, who is also the Deputy Chief Minister.

When asked to disclose the potential figure of the investments, Christina said that she was not at liberty to reveal any numbers as the matter had not been finalised yet.

“Rest assured that all the islands will have a facelift,” she added.

When asked whether the proposed developments would affect the entry fees for the locals, Christina said that the ministry and the Board would be discussing the issue later on.

“We will always make sure that the fees are affordable for locals,” she stressed.

Christina will also ensure that the proposed developments will be environmental-friendly.

The Tunku Abdul Rahman Park is made up of five islands, namely, Gaya, Manukan, Sapi, Sulug and Mamutik.

The purpose of the surprise visit yesterday was to look into the numerous complaints received by Christina regarding the cleanliness of the toilets and facilities in Manukan, Mamutik and Sapi islands.

“I am very concerned about this issue because if the park does not look after cleanliness it would affect the image of Sabah’s tourism. During peak seasons, these islands will be packed…we have tourists from all over the world coming here.

“After we have visited the islands, I believe that the toilets were actually up to par with our expectations. We want the environment to be clean. All the islands must share the same standard,” she said.

She said that her ministry had always been constantly monitoring the islands, to ensure that the islands would continue to be a conducive tourism destination for tourists.