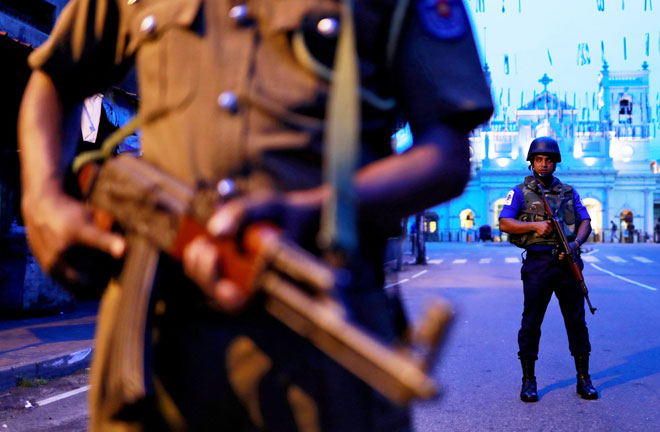 Correcting his earlier statement that the men were seized in Dubai, police spokesman Ruwan Gunasekera said the suspects were taken into custody in the Saudi city of Jeddah.

Among them was Mohamed Milhan, a senior leader of the National Thowheeth Jama’ath (NTJ) jihadist group, which was held responsible for the April 21 bombings, Gunasekera said.

Milhan was also wanted in connection with the November killing of two police constables in the east of the island where NTJ leader Zahran Hashim had his base.

“A team of Criminal Investigations Department officers brought the suspects back to Sri Lanka this morning,” Gunasekera said. No further details were immediately available.

This is the second time suspects have been arrested abroad in connection with the attacks against three churches and three luxury hotels in the country, which were claimed by the Islamic State group.

Last month, army chief Mahesh Senanayake said two suspects were arrested in Qatar and Saudi Arabia. He did not disclose the nationalities of the suspects, but official sources said they were Sri Lankans.

Sri Lankan authorities have arrested just over 100 people who had links with the NTJ and its leader Hashim who was one of two suicide bombers who attacked the Shangri-La hotel in Colombo.

Sri Lanka has been under a state of emergency since the attacks which also left 45 foreign nationals dead and wounded nearly 500 people.

There have been recriminations over the failure on the part of police and security forces to act on advance warnings of the impending attacks.

Top intelligence and police officers have told a parliamentary panel investigating security failures that the attack could have been avoided if the authorities had acted on intelligence provided by neighbouring India.

India had on April 4 warned Sri Lankan authorities that a suspect in their custody had revealed detailed plans to stage a deadly attack in Sri Lanka targeting Christian churches among others.

President Maithripala Sirisena, who is also the minister of defence and law and order, has sacked his intelligence chief, secured the resignation of the defence secretary and suspended the police chief after blaming them for the attacks. — AFP