Thursday, July 7
You are at:Home»News»‘Largest forest cover in the nation’ 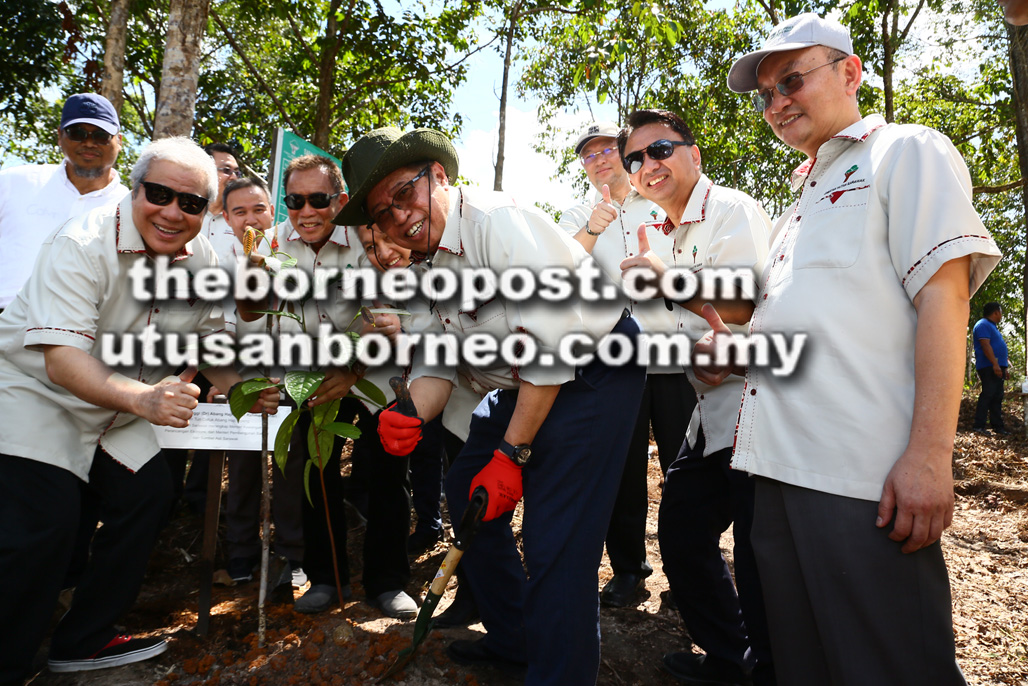 Abang Johari (front, third right) plants a sapling to launch the programme, as (front, from left) Awang Tengah, Len Talif, Snowdan and others look on.

KUCHING: About 63 per cent of Sarawak is covered by forest, the largest forest area among the states in Malaysia.

Chief Minister Datuk Patinggi Abang Johari Tun Openg said the Sarawak government would continue to maintain this rate due to the huge importance the forestry industry gives to the state.

“The government has a very clear land usage policy; six million hectares of land set aside as permanent forest reserves while another one million hectares as totally protected areas,” he said at the launching of the ‘Forest Landscape Restoration Programme’ at
Sabal Agroforestry Centre in Jalan Tun Hussien Onn here yesterday.

He added that the Sarawak government was embracing approaches that would restore and regenerate degraded forests, including swamp forest by growing indigenous tree species that would mature in a short period of time.

He also said the government would allocate some funds for the research and development in fields related to forestry, and roping in corporate expertise to develop and utilise Sarawak’s forestry resources in a sustainable manner.

On a related subject, Abang Johari said Sarawak Forest Department was still being restructured – an exercise that should conclude by the end of next year.

“The restructuring will result, among other things, in the establishment of a new wildlife and natural park department.”

He also announced that ‘Belian’ (local ironwood) had been declared as Sarawak’s heritage tree.

The launching ceremony also witnessed the signing of a memorandum of understanding between Sarawak Forest Department, Sarawak Energy Bhd and Japan Malaysia Association to implement environmental conservation and sustainable programme.

Also, the Ministry of Urban Development and Natural Resources signed ‘Heads of Agreement’ with Shell Malaysia Ltd in signalling the commencement of the next phase of a joint feasibility study, to establish a nature conservation and restoration venture in Sarawak.

He added that policies listed out by Abang Johari in the Sarawak government’s efforts on forest landscape restoration (FLR) included conducting a ‘Five Million Tree Campaign 2020-2025’, encouraging students and undergraduates to plant trees under ‘One Student One Tree Programme’, and providing internship and practical training programmed with the Forest Department to students taking forestry-related courses.