Tuesday, February 7
You are at:Home»News»Sabah»Mangroves – unsung heroes of our coasts
For the freshest news, join The Borneo Post's Telegram Channel and The Borneo Post on Newswav. 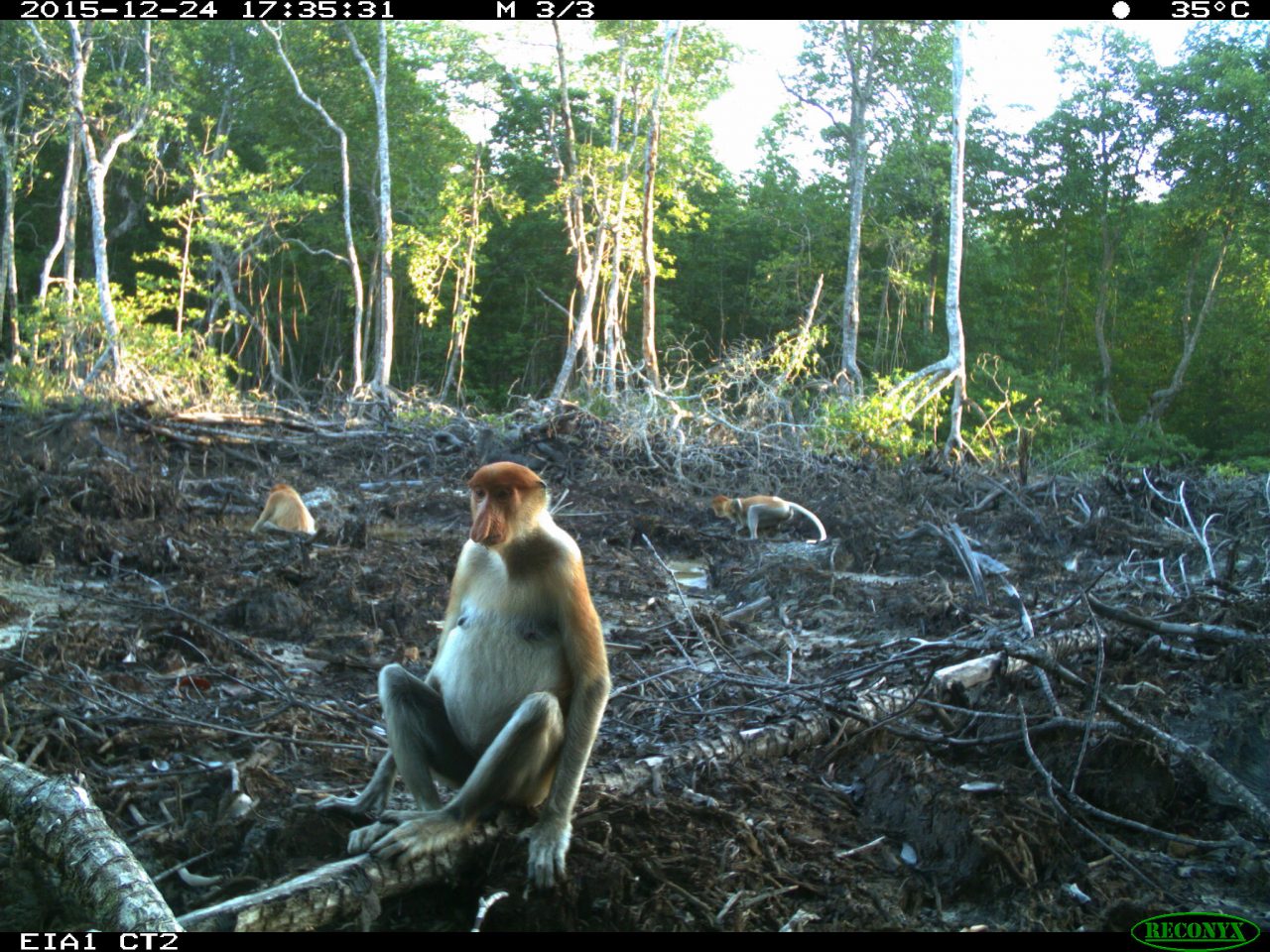 A group of proboscis monkeys roaming in mangrove forest cleared for shrimp farming in Pitas in 2015. Picture courtesy of DGFC.

KOTA KINABALU: In conjunction with the recently celebrated World Oceans Day, Coalition 3H  would like to reflect on the wondrous world where land meets sea ?the world of mangroves, with which Sabah is abundantly blessed.

“Sabah has the largest area of mangroves of any state in Malaysia, with over 232,000 hectares, mainly along Sabah’s east and southeast coast. Most are protected as Class V Mangrove Forest Reserves, or as Class 1 Protected or Class VI Virgin Jungle Forest Reserves. However some critical areas, for example on Sabah’s west coast, remain unprotected.

“While Sabah should be proud to host two wetlands recognized as being of global importance and designated as Ramsar sites ?the Lower Kinabatangan-Segama Wetlands, and Kota Kinabalu Wetland right here in the capital, other parts of Sabah’s mangrove areas are decreasing or being degraded,?Dr Jumin said.

What makes mangroves so special?

Although to the untrained eye all mangroves may look the same, there are at least 22 species of mangrove tree in Sabah, including those known locally as ‘bakau kurap? ‘bakau minyak?and ‘api-api putih? all of which have slightly differing characteristics.

But all are extraordinary trees that live in soft mud at the interface between land and sea. They have to deal with saltwater inundations, water salinity that is highly variable, poor soil aeration and unstable soils as well as strong waves, tide and wind action.

To do this mangroves have developed special features to survive. These include an amazing variety of root systems to gain stability in the soft mud. The roots also act as supplementary respiratory organs allowing them to breathe underwater in the oxygen-depleted mud.

While they can be tough, mangroves are also dependent on freshwater. They die when deprived of freshwater such as when road development reduces flow of water from rivers.

The rich habitat that mangroves provide is home to birds, crabs, prawns, mudskippers and many other types of fish, as well as Sabah’s famed fireflies, endangered proboscis monkeys and the increasingly rare silver leaf monkey, among many other species that are critical components of Sabah’s natural heritage. 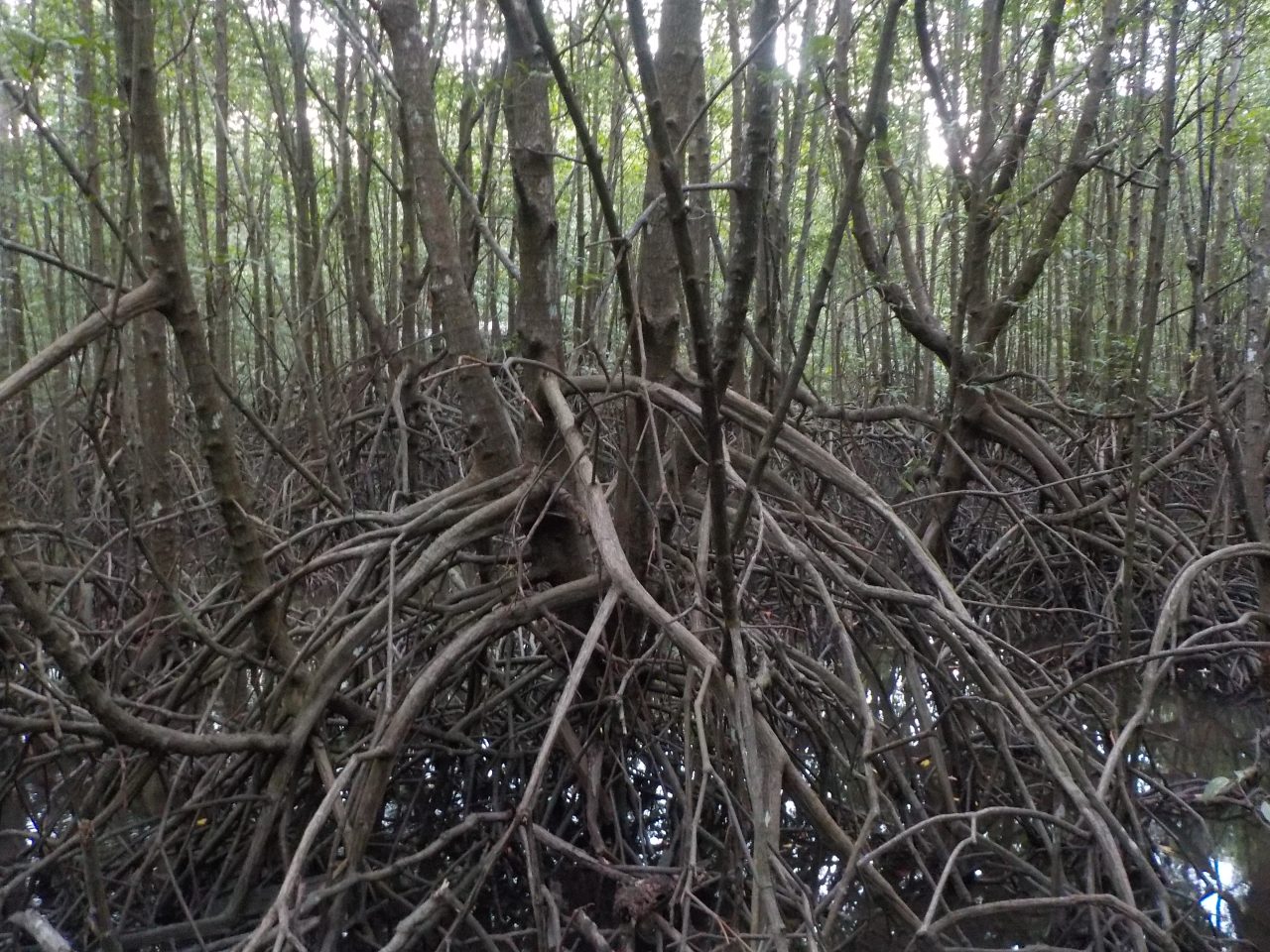 The tangled roots of Rhizophera sp. mangroves provide a safe haven for young fish, as well as trapping sediment from rivers and preventing it going into the sea.

Mangrove ecosystems provide humans with many services. By filtering out sediments, mangroves protect fragile coral reefs and vulnerable sea grass meadows from being smothered in sediment. In coral reefs that are near to healthy mangroves, fish are found to be more abundant, as the young fish grow and develop in the safety of the mangrove roots. Fish as well as crabs and prawns are an essential source of food for thousands and thousands of coastal communities around the world. For Sabah, as we all know, fish is an important economic resource for the state.

Mangroves also act as a ‘bio-shield? by stabilizing shorelines and reducing the effect of storms. The mass of trees rooted on the coast blunts the force of destructive waves and storm surges, finally dissipating the energy away from the land. As such where mangroves have been removed, or the sea has been reclaimed, the coastlines are prone to storm surges and coastal erosion. For this reason, the Sabah Shoreline Management Plan (2005) states that Class V Mangrove Forest Reserves should be retained while avoiding the development of hotels, condominiums and roads in mangrove forests.

Man-made substitutes to mangroves such as reinforced concrete embankments as a measure of erosion control would be extremely costly.

Dr Jumin stressed: “For all these reasons we are heartened by State Minister Junz Wong’s statement in October, 2018 that he will protect mangroves by no longer giving approval for mangrove clearance to develop shrimp farms, and giving zero tolerance to any activities leading to the destruction of mangroves?

Recent research has shown that mangroves (as well as the often overlooked sea grass meadows) store a surprisingly high amount of carbon, some of which remains sequestered for thousands of years in the sediment trapped by the mangrove root system. Based on this, the conversion of a mangrove forest to a shrimp pond, for example, changes the mangrove root system as a carbon sink to a carbon source, liberating the accumulated carbon back into the atmosphere.

“Sabah’s mangroves need to be recognised as carbon storage assets?said Dr Benoit Goossens of Danau Girang Field Centre and Cardiff University. “They are one of the earth’s most efficient ecosystems to sequester atmospheric carbon. At a time when the latest UN reports tell us we have a maximum of 10 -12 years left to prevent catastrophic climate change and extinction crises, why are we even thinking of destroying such valuable natural carbon sinks and hotspots for coastal and marine diversity??

Despite their immense value, mangroves are in constant danger of being damaged and disrupted by infrastructure like roads, hotels and housing developments, shrimp farms and fish farms, and to a lesser extent from being cut for firewood, charcoal and posts. Pollution, including oil spills and sediment, and rubbish like plastic garbage, are also major threats. And the threat is not only from clearance: disruption of river and tidal flows can destroy mangroves and the fisheries and life that they support.

Coalition 3H recommends that any tourism and associated roads planned along Sabah’s coast should plan for future effects of climate change and, guided by the precautionary principle, preserve the natural coastal defense system that mangroves provide, not to mention maintain the very habitats that the tourism attractions, such as endangered proboscis monkeys, need to survive.

“The Sabah Proboscis Monkey Action Plan (2019-2028) explicitly states the halting of loss and degradation of habitat as one of its priority actions to protect this iconic species,?pointed out Dr Goossens.

We need to save this magic world of roots and trees. Let’s hope that the realisation sets in that mangroves must be conserved for their multiple ecological and economic benefits, and protected for future generations.