Wednesday, August 5
You are at:Home»News»School relocation on after govt makes good on pledge 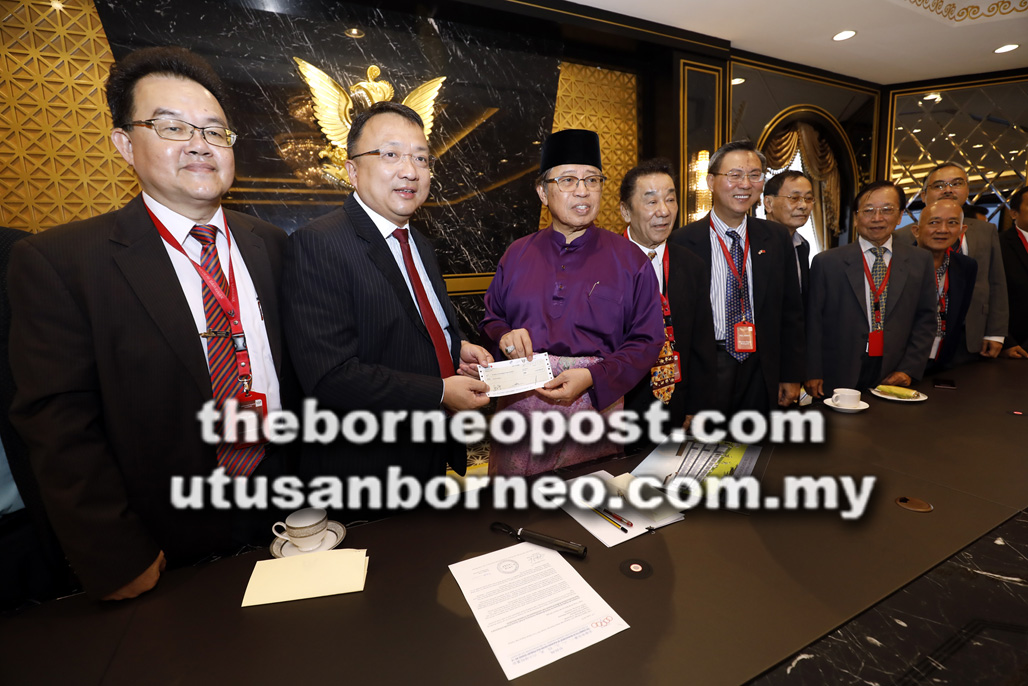 Abang Johari presents the cheque to Chai (second left) while Federation of Boards of Management of Aided Chinese Primary Schools of Kuching, Samarahan and Serian Divisions committee members look on. – Photo by Chimon Upon

KUCHING: The relocation of SJK Chung Hua Bako to Samarahan Division is expected to start in August this year, says Federation of Boards of Management of Aided Chinese Primary Schools of Kuching, Samarahan and Serian Divisions president Jonathan Chai.

He said the prompt commencement of the project was made possible because the Sarawak government had allocated the remaining RM3 million needed to kick-start the project.

“Chief Minister Datuk Patinggi Abang Johari Tun Openg had pledged to us during our fundraising dinner in March that he would match us one-for-one for the project, meaning that we raise RM3 million and the state government will come up with another RM3 million.

“Today (Tuesday) he delivered his pledge and presented us the cheque. We are overjoyed and extremely grateful to him for the allocation as this is what we badly needed to kick off the project,” he told reporters after leading members of the federation on a courtesy call to Abang Johari at his office in Wisma Bapa Malaysia, here yesterday.

The project is estimated to cost around RM6 million, with the primary school relocating to Taman Berlian in Kota Samarahan.

Chai said the decision to relocate SJK Chung Hua Bako, which closed down in 2010, was due to low enrolment of students, with the federation obtaining approval for the relocation from the Ministry of Education in May last year.

“We decided to relocate the school to Kota Samarahan because it is densely populated and has public amenities such as Universiti Malaysia Sarawak (Unimas), Universiti Teknologi Mara (UiTM) and government departments and agencies.

“So there is a need to have a Chinese school there,” he explained.

He added that construction for the new SJK Chung Hua Bako would be completed by next year, and that the school is expected to resume operations by 2021.

On a related matter, Chai said the federation also informed Abang Johari on the building plan for the extension of a classroom building block at Chung Hua Primary School No. 2.

“We extended our invitation to him to officiate at the earth-breaking ceremony which is expected to be held either in July or August.”

He pointed out that the project, estimated to cost around RM8 million, will involve the construction of a 30-classroom building and a multi-purpose hall.

“The extension is due to over-enrolment of students every year. In fact, we had to turn away 144 students last year because of space constraint and insufficient classrooms to cater to the needs of Primary 1 students,” he said, adding the federation had also sought some financial assistance from the Sarawak government for the project.