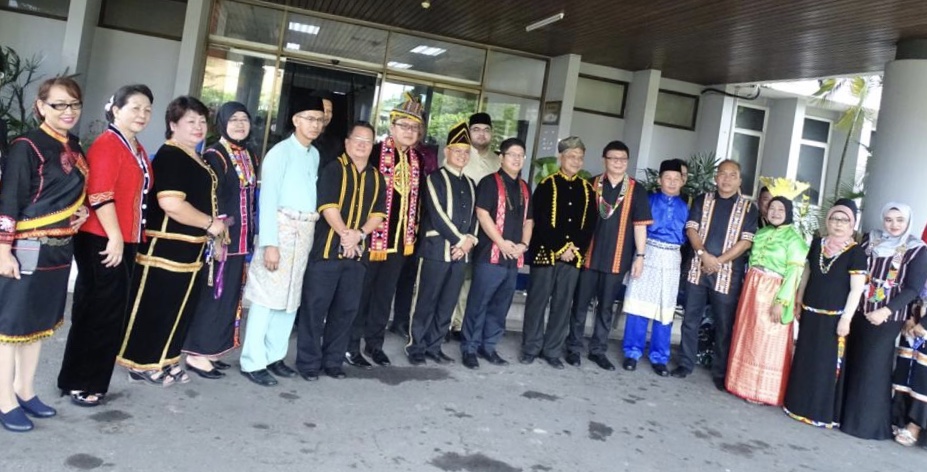 Ewon (centre) with the officers and staff wearing their respective traditional costumes at the Rural Development Ministry’s office yesterday.

KOTA KINABALU: The private sector is welcome to emulate the State Government’s call to allow its civil servants to don their respective traditional ethnic costumes at their workplace.

Rural Development Minister Datuk Ewon Benedick said such initiative is a very good policy that would preserve the culture in the state and, as such, the initiative should also be practised by the private sector.

He said there are private companies out there who have encouraged their staff to wear traditional clothes on certain occasions and festivities, but they are not consistent.

“I believe that there is nothing wrong for those working in the private sector to wear traditional costumes more regularly, whenever they see fit,” said Ewon, when met at his office yesterday.

He reckoned that those working in the tourism and hotel industry should be the first ones to adopt this practice.

Tangau said that the matter had been acknowledged by Chief Minister Datuk Seri Shafie Apdal during his speech at the Sabah-level Kaamatan closing ceremony on May 31.

To support the call, Ewon and his staff under his ministry had all worn their respective traditional costumes to office yesterday.

Ewon, who is also Kadamaian assemblyman, disclosed that he had used a portion of his assemblyman fund to design new corporate uniforms, which had adopted ethnic patterns, for the officers in his constituency.

He opined that the practice of wearing traditional costumes in official government functions would also pique the interest of the visitors from other countries.

He added that the new practice would expose foreign visitors to the variety of style and patterns that Sabah’s traditional costumes have to offer, and that they might even adopt those patterns as part of their fashion.

However, Ewon did admit that not all traditional costumes could be practical at the workplace as some of them may have excessive accessories.

In this regard, he encouraged the local fashion designers in the state to find new ideas on how they can design traditional costumes that are more appropriate to be worn as office attire.