Wednesday, July 15
You are at:Home»News»Higher cost to import gypsum among factors for higher cement prices in S’wak – Masing 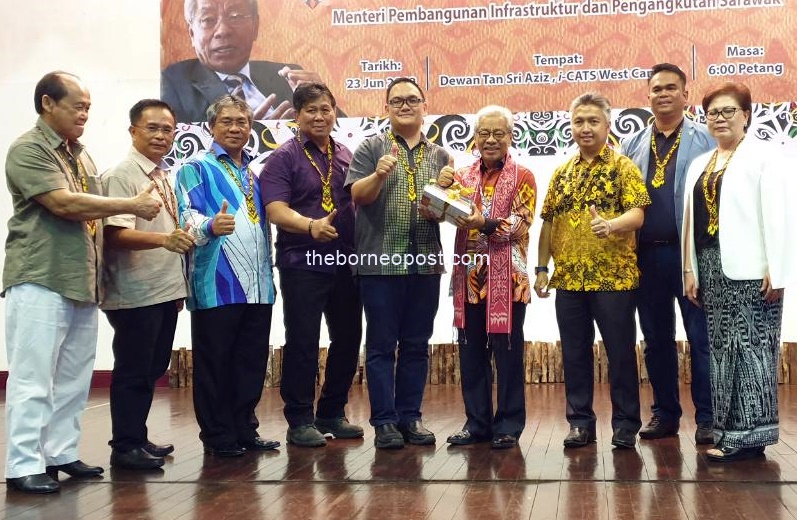 Masing (fourth, right) seen during the event yesterday with organisers and other officials.

However, Masing, who is Infrastructure Development Minister, stressed that there were a few factors which contributed to the prices of cement in the state that needed to be understood by everyone.

According to him, among the factors which influenced the prices of cement in the state were the raw materials used to manufacture cement.

In view that Sarawak manufactures its own cement, Masing said a raw material known as gypsum had to be imported from countries such as Thailand, as the soft sulfate mineral was not found in the state.

“We have raw materials such as limestone and clinker in Sarawak. However, we had to import gypsum and we have to bear with the expensive logistic costs of importing the raw material into the state,” he said after officiating the ‘Malam Randau Bersama Pelajar Dayak IPT Sarawak’ here yesterday.

Since gypsum is imported from Thailand, Masing said the price of the raw material is controlled by the country.

“Thailand is much closer to Peninsular Malaysia, which is why it is cheaper for them to import gypsum. We, on the other hand, had to pay more to transport it here to the state,” he added.

Therefore, he said Finance Minister Lim Guan Eng was right to a certain extend on the higher cement prices in Sarawak but at the same time, consideration must also be given to the cost to import gypsum into Sarawak, which was much higher as compared to Peninsular Malaysia.

Finance Minister Lim Guan Eng in a statement yesterday, wanted further examination to determine whether the markedly higher cement prices in Sarawak compared to Peninsular Malaysia was caused by monopolistic practices of the state’s industry player.