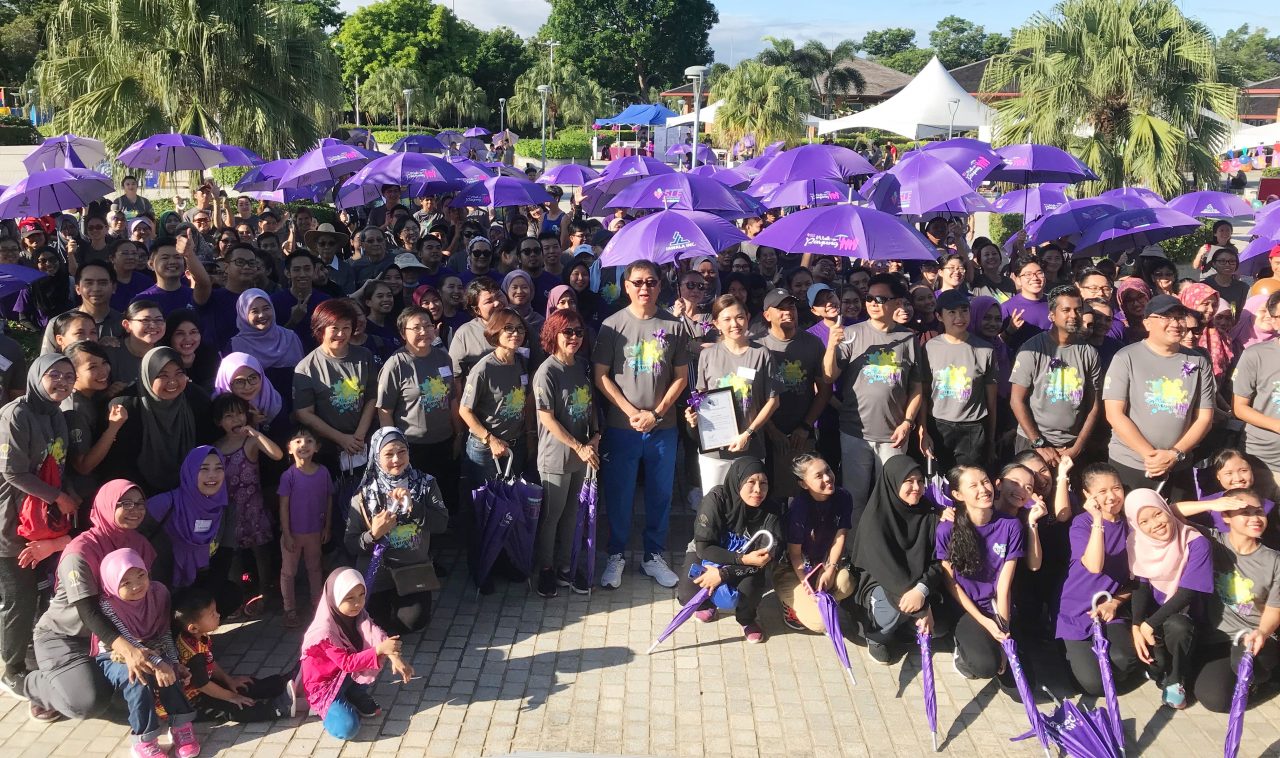 Poon (centre) in a group photo with the Walk-a-Payung walkathon participants.

KOTA KINABALU: More resources, especially in healthcare and financial, is required to increase awareness and provide more services pertaining to the Systemic Lupus Erythematosus (SLE), a life-long, life-threatening disease that occurs when the body’s immune system turns against its own tissues.

Dr Malehah Mohd Noh, consultant rheumatologist at the Faculty of Medicine and Health Sciences of Universiti Malaysia Sabah (UMS), who conducts clinical work at Queen Elizabeth Hospital (QEH), said her database had recorded 342 patients suffering from SLE, but believed that the number had reached 500 throughout Sabah, including Sandakan, Lahad Datu and Tawau.

Around 40 per cent of the 342 patients are Kadazandusuns, followed by other races, she said.

At present, Dr Malehah said there were only two SLE consultants in Sabah, namely herself and Dr Eleen Chong, while QEH was the only healthcare facility in the State that could completely diagnose SLE patients and manage them the best that it could.

“We hope to have more services provided later on.

“Hopefully next year we will have another person joining us as rheumatologist as well,” she said in an interview at the Walk-a-Payung (WAP) walkathon and fund-raising event held at Perdana Park in conjunction with World Lupus Day here yesterday.

Around 600 participants, including patients, family members and members of the public walked about 1.4 kilometres with opened umbrellas to create public awareness that SLE patients have to avoid the sun.

Dr Malehah lamented that many lupus patients in Sabah sought treatment when their symptoms have become severe.

“In Western countries, most patients come in (for treatment) early, in less than six months.”

But in Sabah, she said some patients sought treatment after two or three years because they were not aware of SLE symptoms.

“When we diagnose them, it is a bit too late and some of them suffer from bad infections because of the disease.

“We have patients dying almost every month at QEH because of this severe disease.”

Hence, she said a lot of more resources, particularly in healthcare and financial, were needed to increase the awareness of SLE so that patients and potential patients realize the symptoms of lupus and seek treatment early.

Meanwhile, Dr Eleen, who is the president of PSLEM Sabah Chapter, said SLE was also known as ‘disease with a thousand faces’ because it could mimic many other illnesses.

“Lupus is a systemic autoimmune disease that occurs when your body’s immune system attacks your own tissues and organs.

SLE is a multifactorial disease that could be caused by stress, environmental factors, food, lifestyle or other external stimuli. Very small number of lupus patients have family history of the disease.

An estimated five million people worldwide have lupus, and 90 per cent of the people living with the disease are women, most often between ages of 15 and 44 and last a lifetime.

Anyone can be affected by SLE, she said.

“While there is no cure for lupus, in most cases lupus can be managed successfully through early diagnosis and expert medical care.

“If the disease is treated early, 95 per cent of the patients actually survive beyond 10 years,” she said.