Friday, August 14
You are at:Home»News»S’wakians should stand up, safeguard their own interests, says Dr Sim 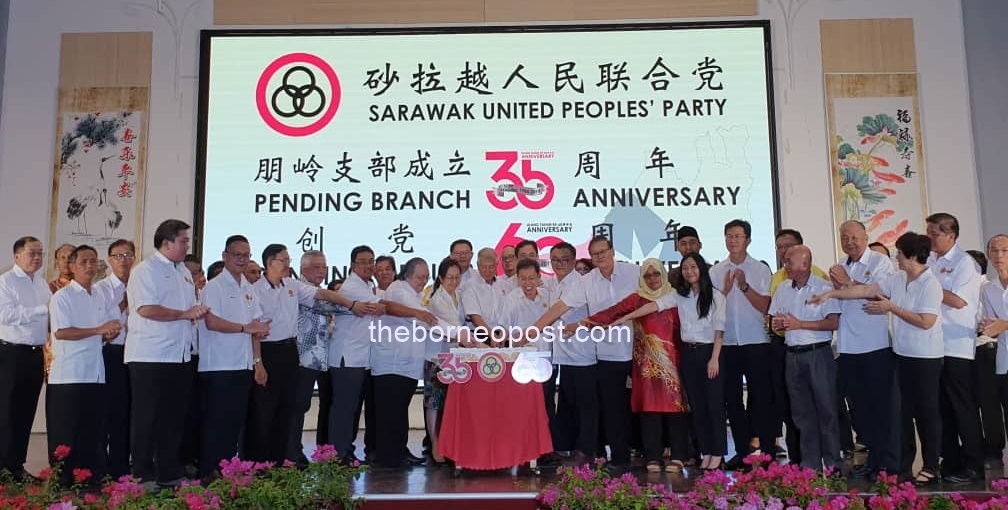 Dr Sim (front left, 10th) cuts the cake to celebrate the 60th anniversary of the founding of SUPP while members of the political party and others pose for a photo call.

KUCHING: Sarawakians should stand up and safeguard their own interests instead of being misled by the federal government with empty promises, said Sarawak United Peoples’ Party president Datuk Dr Sim Kui Hian.

Dr Sim, who is Local Government and Housing Minister said the Gabungan Parti Sarawak-led state government under the leadership of Chief Minister Datuk Patinggi Abang Johari Tun Openg would assist the people in achieving their ‘Sarawak dream’ where equal opportunities and resources are enjoyed by the people of all races in the state.

“We are committed to strengthen Sarawak United Peoples’ Party (SUPP) and the coalition of GPS as a whole to see our rights being return to the state,” he said at the SUPP 60th anniversary dinner held at SJK(C) Chung Hua No. 3 hall here last night.

The dinner was also held to commemorate the 35th anniversary of the establishment of SUPP Pending branch.

Dr Sim said that the recent controversial statement by Finance Minister Lim Guan Eng on the possibility of Sarawak facing bankruptcy in three-year time under GPS; rule was a mere distraction aiming the divert the public attention from the incompetence of the federal government.

Since coming into power, Dr Sim said the Pakatan Harapan federal government had failed to honour their promises of paying 20 per cent royalty on oil and gas products to the state, the returning of 50 per cent of the taxes collected and also granting the state government autonomy in education and healthcare matters.

On another matter, Dr Sim said by leveraging the state natural resources, investments and even imposing tax on products, the state government would have the extra revenue to improve the infrastructure in the rural and urban areas.

“The state government is currently exploring ways to widen our revenue stream in line with our efforts to achieve financial independence and at the same time develop the state,” he added.

He also warned certain parties against betraying the interests of the state, stating that as Sarawakians, regardless of their differences, they should be united and work together in reclaiming the rights of Sarawak.

Moreover, he urged the younger generation of SUPP to rise and provide check and balance to both federal and state government administrations in ensuring their accountability to the interest of the people.