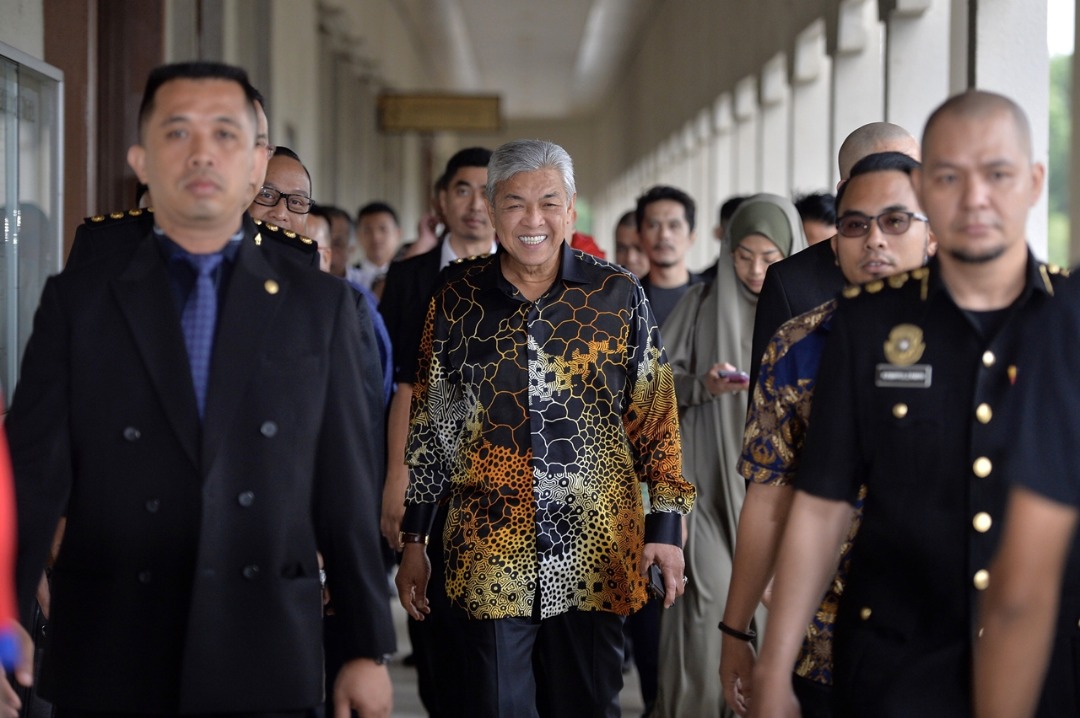 This is the fourth time the former deputy prime minister was charged at the Sessions Court here since last year, bringing the total charges against him so far to 54.

Ahmad Zahid, 66, however, pleaded not guilty to all the fresh charges after they were read to him before Judge Hakim Azura Alwi.

“I understand and I claim trial,” the UMNO president said from the dock.

On the first count, Ahmad Zahid was charged with accepting SGD300,000 from Syarikat Ultra Kirana Sdn Bhd as an inducement for him as a public officer, that is as Home Minister, to extend the company’s contract as the operator of the One Stop Centre (OSC) in China and the VLN system.

He is alleged to have committed the offence at Seri Setia, Precinct 16, Putrajaya, on March 28, 2017.

On the second count, Ahmad Zahid was charged with accepting another SGD300,000 from the same company at the same place on May 4, 2017.

On the third and fourth counts, he was charged each with accepting SGD1.04 million from the same company between September and November 2017.

On the fifth, sixth and seventh counts, Ahmad Zahid was charged each with accepting SGD520,000 from the same company on Jan 10, Feb 12 and March 2 last year, also at the same place.

The charge, under Section 16 (a)(B) of the Malaysian Anti-Corruption Commission (MACC) Act 2009 and punishable under Section 24 (1) of the same Act, carries a maximum jail term of 20 years and fine of RM10,000 or five times the amount of the bribe, whichever is higher, if convicted.

The court allowed the accused bail of RM200,000 with one surety and set July 31 for remention of the case.

Former prime minister Datuk Seri Najib Tun Razak was also spotted talking to Ahmad Zahid in the public gallery and leaving the courtroom right before the proceeding began at 9.16 am.

On Oct 19 and Dec 14, 2018, as well as Feb 20 this year, Ahmad Zahid had pleaded not guilty at the Sessions Court here to a total of 47 charges, 12 of which were for criminal breach of trust, eight for bribery and 27 for money laundering involving tens of millions of ringgit belonging to Yayasan Akalbudi.

Ahmad Zahid is expected to be slapped with another 33 graft charges over the VLN system at the Shah Alam Sessions Court tomorrow. – Bernama