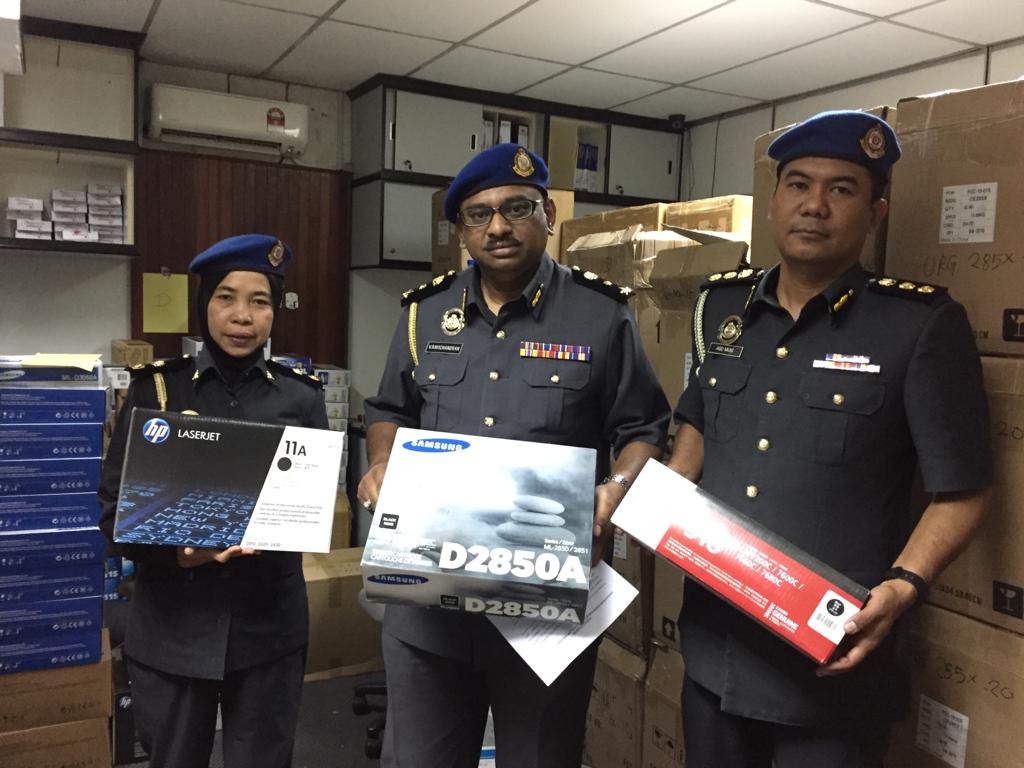 Ravichandran (middle) and the enforcement unit’s officers showing some of the counterfeit items that were seized.

KOTA KINABALU: The State Domestic Trade and Consumer Affairs Ministry enforcement unit yesterday raided a premises in Penampang which was reported to be a storage unit for counterfeit electronic goods.

Deputy State Director Ravichandran a/l Vadivellu in a media statement said that the raiding team seized items worth about RM800,000 from the premises.

They also detained five people, including three women to facilitate investigations into the case.

Ravichandran, who is also the State Domestic Trade and Consumer Affairs Ministry enforcement unit chief, said the raid was conducted following a report made by the authorized representative of the brands Samsung, HP and Canon.

“The report said that the premises was used as a store for imitation goods of the three brands,” he said, adding that action would be taken under Section 8(2)(b) of the Trade Descriptions Act 2011 which carries a fine of RM10,000 for every fake item or three years’ jail for an individual found guilty whereas a company can be fined RM15,000 for each of the counterfeit items.

Ravichandran also disclosed that as of June 25 this year, the State Domestic Trade and Consumer Affairs Ministry enforcement unit had conducted 40,800 checks throughout the state.

“Action has been taken under various Sections of the Act leading to the seizure of RM2,417,324.69 worth of goods while compound and summonses issued totalled RM235,530 and RM65,000 respectively,” he said.