Saturday, May 30
You are at:Home»News»Nation»Dr Mahathir assembles with Avengers at Pavilion 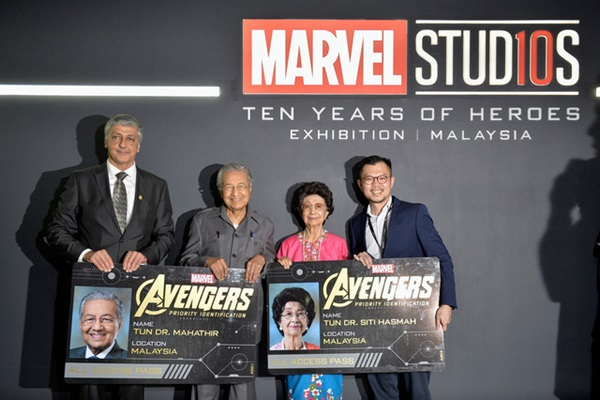 KUALA LUMPUR: Malaysia’s ‘own’ superhero Tun Dr Mahathir Mohamad, today spared some time from his busy schedule to assemble with the Marvel’s Avengers at the Pavilion, here.

The 93-year old prime minister, accompanied by his wife Tun Dr Siti Hasmah Mohamad Ali was greeted by an almost-complete team of Avengers, including Iron Man, Thanos and Captain America.

The meet-up was arranged for the launching of the first ever Marvel Studios: Ten Years of Hero’s Exhibition by Captain Malaysia himself, Dr Mahathir.

Asked on the exhibition which would be opened for the public starting tomorrow until Oct 17, Dr Mahathir who was brought on tour around the exhibition said it was amazing to see how film technologies had progressed.

“To produce a film in the past, the cartoons had to be drawn by hand, but now there is no necessity for this, just use animation,” he said.

Named Thanos as his favourite character, Dr Mahathir believed that the exhibition would attract a huge crowd as it displayed real charactors’ costumes among others.

The exhibition, organised by Walt Disney Company Southeast Asia together with Crave Alive and Beast Kingdom, in collaboration with Maybank, Samsung Malaysia and KLOOK to be held at level 10 of the Pavilion, transports visitors into the multi-sensory world of the Marvel Cinematic Universe, celebrating the first 10 years of Marvel Studios’ films, from Iron Man (2008) to the record breaking blockbuster Avengers: Endgame (2019), through 10 immersive galleries featuring original movie props, costumes, concept art and interactive experiences.

Visitors will also have the chance to purchase Marvel exclusive merchandise, from t-shirts, stationery, bags, and collectible items, including selected pieces that are being sold in Malaysia for the very first time.

Entrance fee is RM48 per adult and RM28 per kids. – Bernama