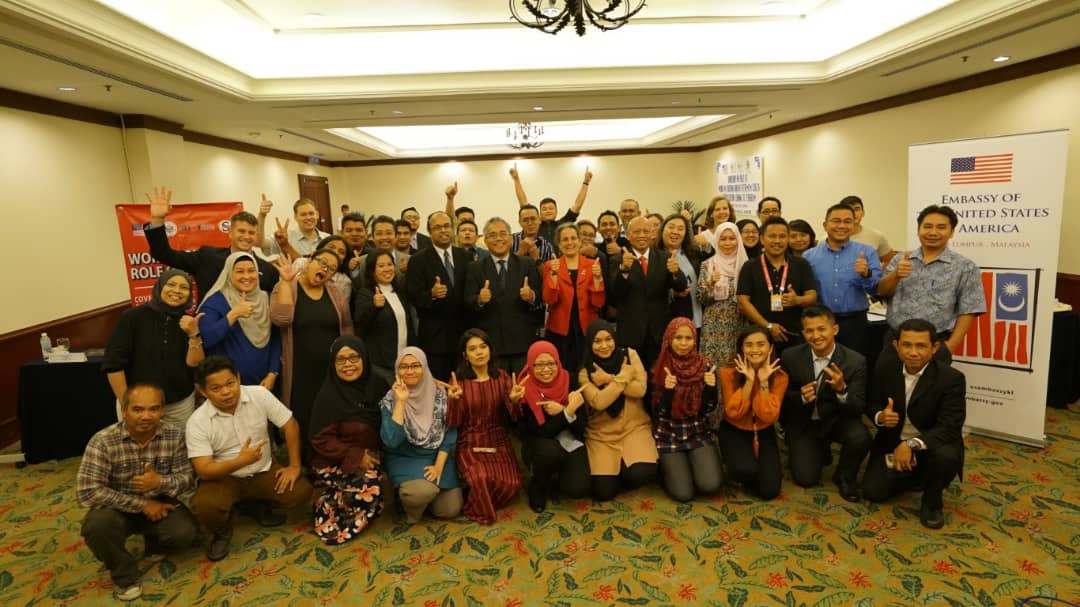 Kamala (second row, sixth right) with the participants at the end of the media workshop yesterday.

KOTA KINABALU: About a month ago, Malaysians were clicking like crazy and pouring money into a nine-day-old website which stated that the US government was giving visa-free travel to Malaysians.

As said by the United States Ambassador to Malaysia, Kamala Lakhdhir, the social media environment was all about getting clicks and money, where the more exciting it was, the more people would open it.

She said this therefore showed that the media was transforming itself so fast with so much competition going on, making it challenging for journalists, particularly in Malaysia.

Speaking at the closing ceremony of a media workshop on Countering Violent Extremism (CVE) and Radicalization Leading to Terrorism at a luxury hotel here yesterday, Kamala said Malaysian journalists were facing difficult challenges in their role to convey stories to readers who were not only the public but also included the government and political parties.

Attended by 28 journalists mainly from Sabah and Sarawak, she opined that CVE, which was  discussed in the three-day workshop since Tuesday,  is one of the most complicated issues faced around the world.

Starting with the 9/11 incident, Kamala said the same questions were being asked, and taking an example of Malaysians in particular, why Malaysian women would decide to go and join ISIS in Syria?

“Who were those people and why were they volunteering to essentially destroy their lives?

“How do we persuade people that actually there are other ways to achieve the types of change that they want without violence? That social justice is possible without blowing yourself up?

“So when you are a journalist, you are at the forefront if you are going to cover this, figuring out these questions, and figuring it out in an accurate and honest and ethical way, and that is why I said this is incredibly difficult.

“And nobody has the answers exactly. We are all struggling forward. How do we ensure we are doing it the way that is most effective?” she said.

Kamala also lauded the efforts made by Searcct, which is recognised globally, and the US counterparts, and opined that it has contributed to the sophistication of the Americans’ understanding on the dynamics of CVE, particularly in Malaysia.

“So I say to all of you, when you take this on, it is an obligation and responsibility for your society and your readers and you want readers because otherwise what’s the point?

“… And part of your role is bringing your stories to people to take action because I think a lot of people feel alone. And your role telling the stories and telling how this impacts real people’s lives and how people can’t fight against it and how people can support those who are fighting against it, is your message,” she said before ending her speech with appreciation and thanks to all workshop participants who were involved in making the workshop a success.

He said providing the truth to the general populace was not without its negative repercussions and often journalists could not control the reactions coming from their audience against their message.

Therefore, it is crucial for fellow journalists to portray and set their agenda which must not allow themselves to become an unintended platform that legitimises violent terrorist groups, he added.

The ceremony ended with the presentation of certificates to participants.