Sunday, February 28
You are at:Home»News»Fatimah proposes Anjung Singgah for homeless in Sibu 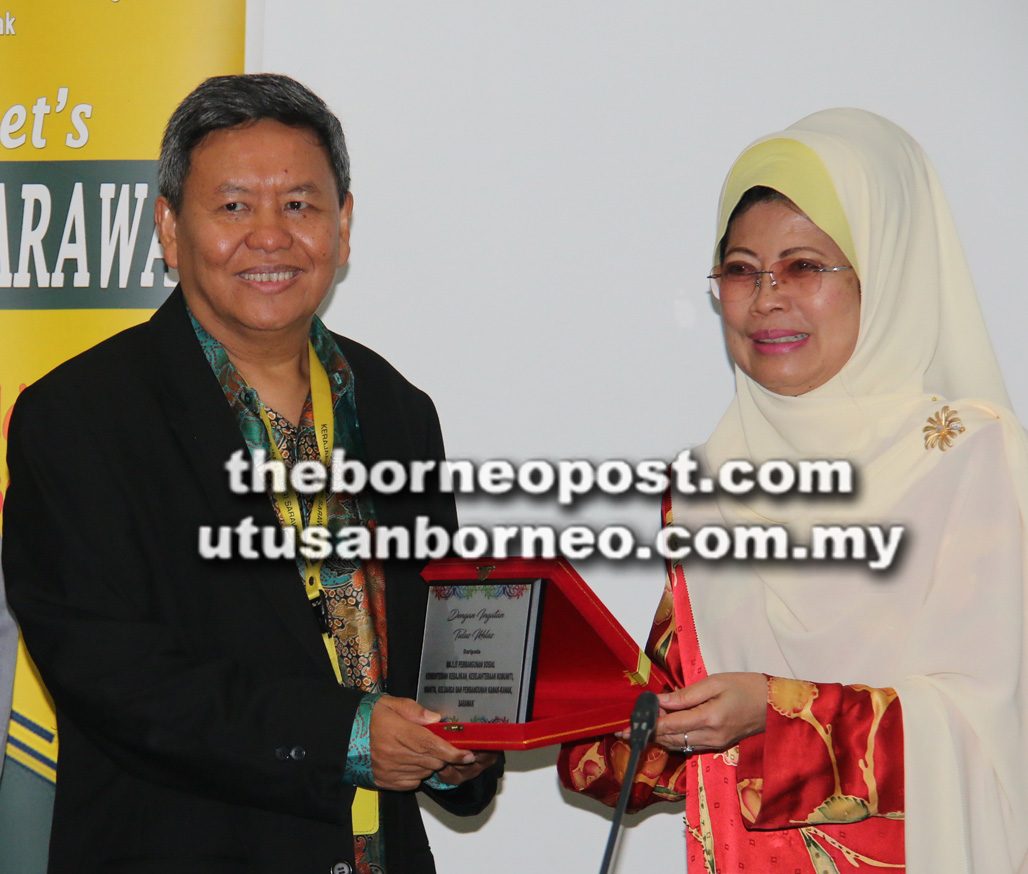 Fatimah presents a memento to Siaw in appreciation

SIBU: There is a need to set up ‘Anjung Singgah Sibu and Soup Kitchen’ to help homeless people here.

Minister of Welfare, Community Wellbeing, Women, Family, and Childhood Development Dato Sri Fatimah Abdullah said the establishment of such facilities was presented yesterday at a workshop on ‘Solving the Homeless Issues’ held at the Resident’s Office here.

‘Anjung Singgah’, she said, will be a temporary shelter for the homeless who had to sleep on the streets.

According to her, staff from Sibu Resident’s Office visited Kuala Lumpur Homeless Transit Centre, Anjung Singgah KL, and Community Learning Centre for the homeless recently to study some of the best ways to
solve the problems of the homeless.

She said in Sarawak, only Kuching has ‘Anjung Singgah’.

“Hence, whenever the ministry conducts an integrated operation in Sibu, the ministry usually has to set up canopies in front of  Maksak building.

“The ministry then provided health screening, urine test, food, clothes, documentation and so forth for the homeless.

“In Kuching, whenever we have integrated operation to rescue the homeless, we have ‘Anjung Singgah Kuching’ to place the homeless but we do not have such facility elsewhere in this state.

Fatimah who was speaking to reporters after the workshop, said the concept of the proposed Anjung Singgah Sibu would be different from the one in Kuching.

“For Sibu, there would be coordinated system whereby various services could be provided for the homeless.

“It will be an improvement on the system, an integrated concept with a place for the homeless to spend the night where some social assistance such as meals could be provided,” she stated.

She added that non-governmental organisations (NGOs) would then have better opportunities to help the homeless by providing them food.

“We want their efforts to be consistent and coordinated,” she pointed out.

According to her, Sibu Resident’s Office has come up with a plan, but the budget has yet to be worked out.

“We will look at opportunities, challenges and weaknesses and from there, we hope that someone can help us upgrade the existing Maksak building to establish ‘Anjung Singgah Sibu and Soup Kitchen’,” she added.

The minister pointed out that a long term solution for the homeless was discussed at the workshop.

“We also discussed the skills needed to help the homeless, scope of assistance to be provided and so on.

“We will try to modify the various measures we had learned in Kuala Lumpur to suit the homeless issues that we are facing in this state,” she said.

Meanwhile, she revealed that a total of 54 operations to rescue the homeless had been conducted in the state between 2016 and 2018, with 162 people rescued.