Sunday, November 1
You are at:Home»News»Sugar AP holder rubbishes talk of ‘dealings’ with Chong 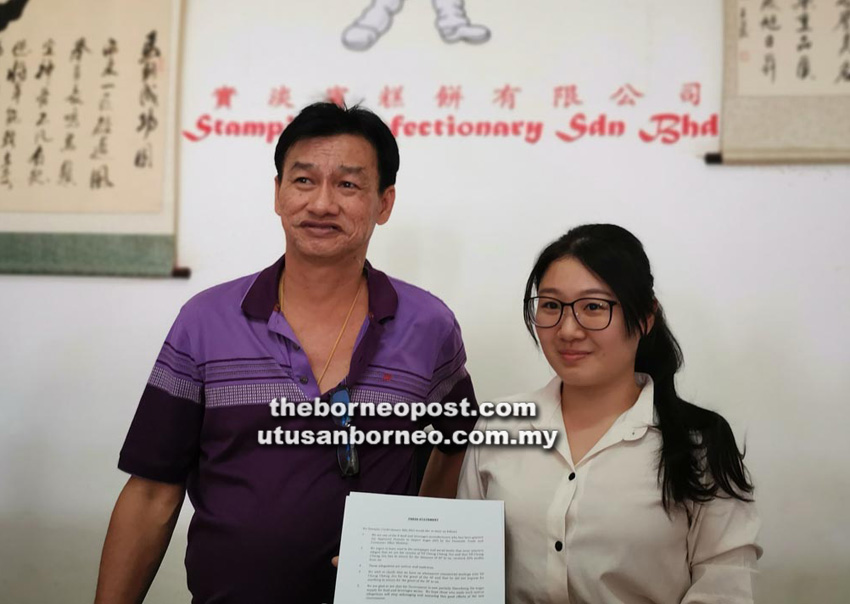 Tan (left) and Li Xian pose for a photo during the media session at Stampin Confectionary’s premises in Stakan.02

KUCHING: Stampin Confectionary Sdn Bhd, one of the eight food and beverage (F&B) manufacturers in Sarawak that were granted the approved permit (AP) to import sugar, has clarified that it has no commercial dealings with Deputy Minister of Domestic Trade and Consumer Affairs Chong Chieng Jen.

Its founder Tan Yang Chai said the company regretted to hear about the recent talk in the media – both social and mainstream – claiming that the eight F&B manufacturers were granted the APs because they were the deputy minister’s cronies.

Speaking to journalists here yesterday, he dismissed the allegations about Chong having received 30 per cent of their profits from importing sugar into Sarawak.

“We regret to have read in the newspapers and social media that some quarters allege that we are the cronies of Chong Chieng Jen and that he has, in return for the issuance of AP to us, received 30 per cent profits from us.

“These allegations are untrue and malicious,” he said in a brief media session held at his company’s premises in Stakan here.

He said he was glad that the federal government had decided to partially liberalise the sugar supply for the F&B sector, and called upon those making such allegations to stop sabotaging and smearing the good work of the new government.

With Tan at the media session yesterday was Stampin Confectionary director Tan Li Xian, who said the company had yet to start importing sugar despite having been granted the AP.

She said the company applied for the AP early this year and was informed by the Ministry of Domestic Trade and Consumer Affairs (KPDNHEP) of the approval only in June.

“We didn’t think that we would be granted the AP to import sugar but in June, the KPDNHEP office at Jalan Tun Jugah called us in to collect the AP.

“Even though the AP has been granted, things are still in process as we need to proceed with the registration of e-permit,” she explained.

Li Xian said they had been made to understand that the AP allowed F&B manufacturers to import only 60 per cent of their total production requirements annually.

“The AP is meant for us to import sugar for industry use, rather than for resale. We are allowed to import only 60 per cent and the remaining 40 per cent (is to be obtained) from the local distributors,” she said.

She also revealed the company plans to import sugar from Thailand at the price recently announced by Chong.

Prior to the AP being granted, Li Xian said they had to purchase sugar from local distributors – with the highest price at RM2.97 per kilogramme.

“We wouldn’t know how much it would be to import sugar from Thailand but it should be around the price announced by the deputy minister (Chong),” she added.

On June 20, Chong announced that the eight F&B manufacturers would be able to obtain sugar from Thailand at RM1.70 per kilogramme, inclusive of transport charges.

A week later, political secretary to the chief minister Tan Kai challenged Chong to name the eight F&B manufacturers who are currently holding the AP to import sugar.

Tan Kai said the name of the companies who were granted the AP should be made known to prove that the Pakatan Harapan (PH)-led government did not abuse the system.

On June 28, Padungan assemblyman Wong King Wei lodged a police report on behalf of Chong over allegations on social media about the deputy minister receiving 30 per cent profits from the eight F&B manufacturers for the AP granted to them.

Previous ArticleShafie: Cross-border crimes down with formation of ESSCom
Next Article 12MP formulated based on three dimensions — Mohamed Azmin