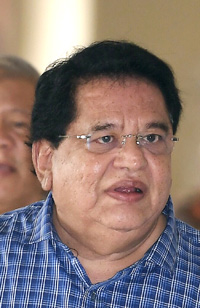 Nik Yahaya Nik Mustapha, 54, in reading out his witness statement, said Tengku Adnan gave him the cheque at his office on June 14, 2016.

“Datuk Seri Tengku Adnan asked me to deposit the cheque into Tadmansori’s account number 8001179747 and I then took the cheque to CIMB Berhad Damansara Town Centre to bank-in the cheque into the company’s account,” he said during examination-in-chief by deputy public prosecutor Haderiah Siri on the first day trial of Tengku Adnan’s RM2 million corruption case.

Nik Yahaya, who is the fourth prosecution witness, said this when Haderiah referred to him a Hong Leong Islamic Bank cheque for RM2 million, dated June 14, 2016, issued by  Aset Kayamas Sdn Bhd  to Tadmansori Holdings.

Nik Yahaya, who was Tengku Adnan’s personal driver for 24 years before quitting the job in June last year, also confirmed the account number written on the cheque belonged to Tadmansori and the telephone number that was written on the back of the cheque was his.

He said the company name, account number and telephone number were written by him before he deposited the cheque.

On his job as Tengku Adnan’s personal driver, Nik Yahaya said he also took the role of  the minister’s personal bodyguard when the actual bodyguard went on leave or was sick.

Cross-examined by Tengku Adnan’s lawyer, Datuk Tan Hock Chuan, Nik Yahaya said his former employer was a busy man because of his high position in the cabinet and also the party he represented .

He concurred with Tan that Tengku Adnan was a generous person and often gave financial aid to those in need.

Tengku Adnan, as a public servant, namely Federal Territories Minister, is alleged to have accepted for himself RM2 million from Chai Kin Kong via a Hong Leong Islamic Bank cheque belonging to Aset Kayamas Sdn Bhd which was deposited into the CIMB Bank account of Tadmansori Holding Sdn Bhd in which he had an interest, when it was known that Aset Kayamas had connection with his official duties.

The charge was framed under Section 165 of the Penal Code, which provides for a jail term of up to two years or fine or both, on conviction.

The hearing is before judge Mohamed Zaini Mazlan. — Bernama