Friday, June 5
You are at:Home»News»Nation»Pasir Salak MP Tajuddin ordered out of Dewan Rakyat 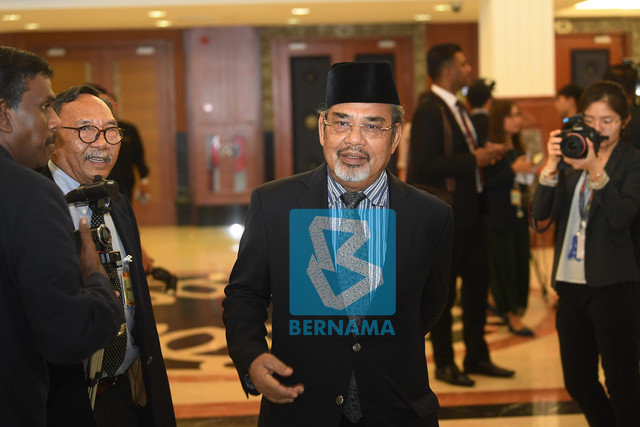 Pasir Salak MP Datuk Seri Tajuddin Abdul Rahman was today ordered out of the Dewan Rakyat for four days after he triggered a commotion in the house. – Bernama photo

KUALA LUMPUR: Pasir Salak MP Datuk Seri Tajuddin Abdul Rahman was today ordered out of the Dewan Rakyat for four days after he triggered a commotion in the house.

Tajuddin was not satisfied when his question on the success of the cash crop programme was answered by Deputy Agriculture and Agro-based Industry Minister Sim Tze Tzin and not the minister, Datuk Salahuddin Ayub, who is said to have been in the house earlier.

He expressed his dissatisfaction when Nga allowed him to raise a supplementary question.

Nga asked him to go ahead and put forward the question but Tajuddin continued to harp on the matter and Nga told him that a minister or deputy minister can reply on behalf of the government.

“Pasir Salak understands but is deliberately causing a commotion. This is an irresponsible attitude, put forward your supplementary question. If you do not want to do so, I will move to the next question,” he said.

Nga then ordered Tajuddin out of the house for two days for being adamant and not complying with his order under Standing Orders 44 (2).

“I advised him repeatedly to sit down so as not to waste the time of this august house but he is obstinate and deliberately so,” he said.

Tajuddin refused to yield, prompting Nga to issue a fresh order for him to stay out of the house for four days.

The oral question-and-answer session resumed after the commotion of about 15 minutes.

Meanwhile, Salahuddin, when approached by reporters in the Parliament lobby, said it is normal practice for deputy ministers to reply to questions in the house.

“It’s not an issue that I ran away from the Dewan,” he said, adding that in some instances, the deputy minister is assigned to answer questions.

“It is a normal practice in any ministry,” he said. – Bernama