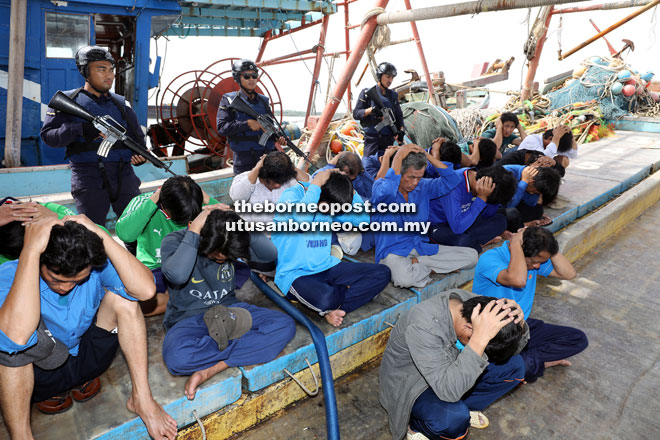 MMEA enforcement personnel arrest several crew members of a foreign fishing vessel in a previous operation. Photo by Chimon Upon

KUCHING: A federal minister today proposed in Parliament that foreign fishing vessels caught trespassing into Malaysian waters be scuttled in addition to raising the penalty for their captains and crew members.

Agriculture and Agro-based Industry Minister Salahuddin Ayub said in a MalaysiaKini report that the vessels should be sunk to become artificial reefs.

“This is the appropriate action we should take as our neighbouring countries have done the same thing,” Salahuddin was quoted saying in the Dewan Rakyat in Kuala Lumpur during the question-and-answer session.

He had also said the government would increase the penalty against captains and crew members of foreign fishing vessels encroaching into Malaysian waters.

Salahuddin said the government would amend the Fisheries Act to increase the fine for a captain and crew members by sixfold to RM6 million and RM600,000 per person, respectively.

MMEA Sarawak Operations deputy director Maritime Commander Hamiludin Che Awang said the boats had a haul of about five tonnes of fish and also carried about 10,000 litres of diesel.

The skippers and 19 crew members were arrested and investigated under Section 15 (1) (a) of the Fisheries Act 1985.

Hamiludin pointed out that there had been eight cases of encroachment so far this year.