Thursday, December 8
You are at:Home»News»Woman safely delivers baby boy with help from Bomba after getting stuck on express boat 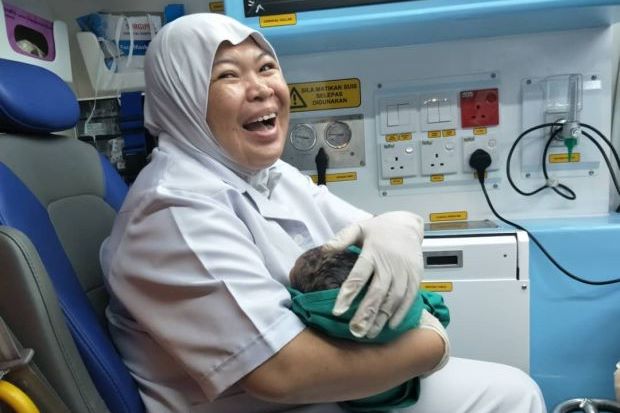 A nurse cradles the newborn child, which was delivered safe and sound despite his mother getting stuck on the express boat. Photo courtesy of Bomba

KUCHING: A pregnant woman who was travelling on a longboat safely gave birth to a baby boy on a bench at Express Boat Terminal 2 at Jalan Wharf today with help from Fire and Rescue Department (Bomba) personnel when she suddenly went into labour.

Sarikei Bomba chief Mahmudin Narudin said the 22-year-old pregnant woman, who was with her husband, were on their way to Sarikei Hospital from her home in Bukit Kinyau as she was experiencing labour pain.

“We received a distress call at 11.56pm on Tuesday regarding a woman who could not board the terminal as the barrier gate was locked.

“We had to break the padlock to allow paramedics to get in to help the woman,” he said, adding that 10 firemen were deployed to the scene.

“However, the woman could not be brought to the hospital in time as she was in pain and going into labour.”

The woman gave birth on the bench with help from paramedics, with her husband by her side.

Both mother and son are now in stable condition at Sarikei Hospital.