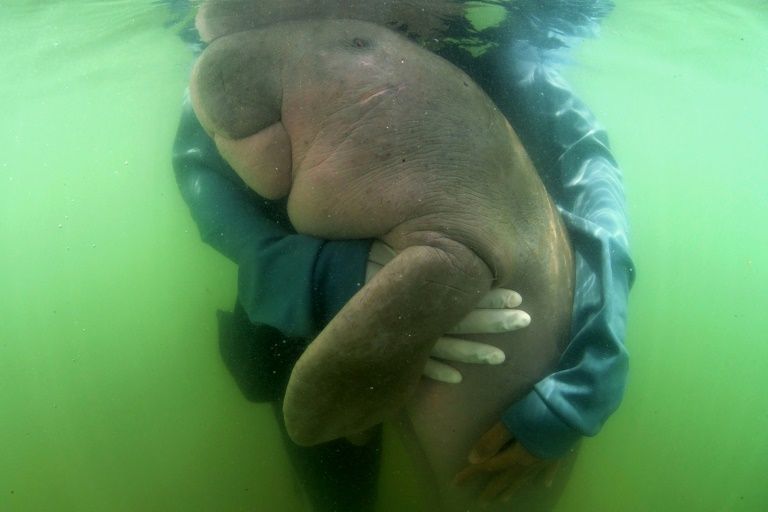 Female dugongs usually breastfeed their babies while they are swimming, so vets at Phuket Marine Biological Centre cradle the oprhaned baby Mariam instead. AFP Photo

TRANG: Cuddles at feeding time are one of many techniques vets in Thailand are using to raise an orphaned baby dugong named Mariam, and which have helped spread interest in ocean conservation in the process.

Found stranded on a beach in May at six months old, the ocean mammal has been receiving daily care from park officials, local conservation groups, and veterinarians at Phuket Marine Biological Centre.

Her star took off after photos showing her being cradled by the vets went viral on social media, and the Department of Marine and Coastal Resources (DMCR) has posted frequent updates on her condition.

Vet Pathompong Kongjit told AFP that Mariam — who now lives in the waters around Ko Libong island of Trang province — has become a symbol of the dire need for a clean-up in Thailand’s plastic-choked seas.

“Mariam has ignited the interest among Thai people to care about marine animals, Thai seas and nature in general,” he said.

But so far, her biggest challenge is feeding herself, as she has trouble digging out the seagrass buried in the ocean floor.

“Mariam can only eat the protruding seagrass,” he told AFP, adding that she’s “getting better” at it.

Female dugongs also usually breastfeed their babies while they are swimming — something the vets cannot do.

“So we hold her while feeding her milk, and after that we have to get her to swim around to exercise her digestion system,” Pathompong said.

Her caretakers also use an orange canoe — nicknamed “Mother Orange” — for her to follow around in the water for exercise.

Despite Mariam’s seeming dependence on her human friends, Pathompong said she’s “learned to adjust to the environment” and no longer gets stranded on the beach.

But “it doesn’t matter how many marine animals we can save… if their sea homes are in bad conditions,” said the vet, adding that Mariam will likely be under their care for at least another year.

The avalanche of public interest in Mariam’s progress has prompted the DMCR to set up a livestream for the growing baby, expected to be broadcast at the end of this week.

Another baby dugong was also found stranded in Krabi earlier this week.

The Phuket Marine Biological Centre said in a statement that dugongs get stranded on beaches because of fishing and other human activities.

Southern Thailand’s waters are home to about 250 dugongs. – AFP