Wednesday, September 28
You are at:Home»News»We’re not responsible for villagers’ safety, says company after Simunjan plantation fracas 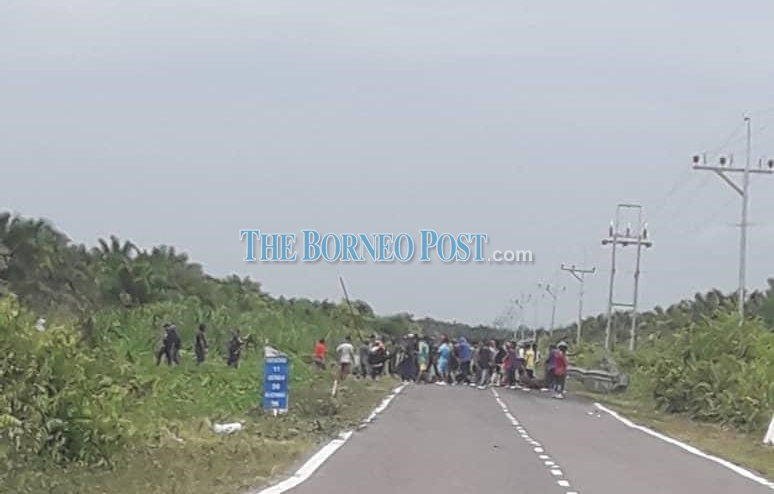 The photo that went viral on social media that apparently shows Indonesian estate workers staging a roadblock as a show of dissatisfaction after their countryman was assaulted by locals. – File photo

KUCHING: Tradewinds Plantation Berhad today said the authorities were partly to blame for the clash between its workers and villagers at its plantation in Simunjan on Tuesday.

The company alleged in a press statement that one of its workers was assaulted by the people in the area and by hoodlums, who it claimed were brought in by individuals involved in a land dispute with the company.

It said the reluctance of the relevant authorities to take concrete action against the locals involved in the incident despite numerous police reports lodged previously had contributed to the incident.

“Tradewinds will not be responsible for the safety of the villagers within the area, in the event that the Indonesian workers at the estate retaliate against the locals due to the inaction of the authorities.

“This is because the Indonesian guest workers of Tradewinds, who are earning an honest living in this country, may be provoked into taking action into their own hands upon seeing a fellow countryman being assaulted and if no strong preventive and investigative actions are being taken by the authorities to resolve the matter,” it said.

It added that there had been continued intrusion by villagers who are assisted by unknown persons into the estate to illegal harvest its Fresh Fruit Bunches.

Asserting that a Court of Appeal had ruled that it had lawful ownership of the estate, Tradewinds said it was open to further engagement with police and the local community to ensure that its operations are carried out safely and smoothly.

In the incident on Tuesday which went viral on social media, angry plantation workers had set up a barricade on the main Simunjan-Gedong road after one of their colleagues were allegedly assaulted.

The police had deployed several personnel to calm the situation and have urged anyone who has knowledge of the incident to contact the nearest police station.

It is learnt that the company and the villagers had been embroiled in a legal tussle since 2010.