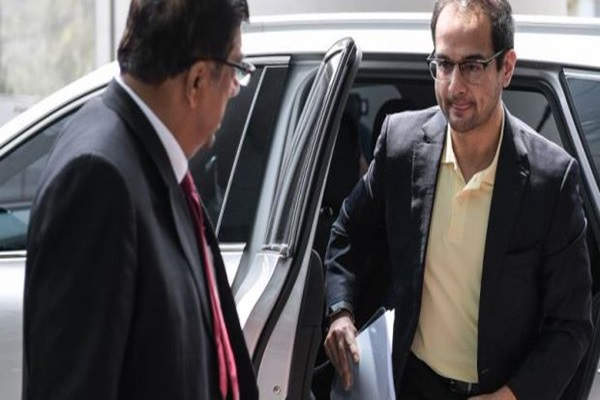 Riza arrives at court, where he pleaded not guilty to give charges of money laundering. Bernama Photo

Riza, 42, the owner of Red Granite Pictures entered the plea in the presence of Judge Rozina Ayob after the charges were read out to him.

On the first charge, the producer of the film ‘Wolf of Wall Street’ was charged with involvement in money laundering activities by accepting funds from illegal activities involving US$1,173,104 through a money transfer transaction from account number 11116073 belonging to Good Star Limited at RBS Coutts, Zurich, Switzerland to a City National Bank account, Los Angeles, USA number 123248291 belonging to Red Granite Productions Inc.

The funds were alleged to have been misappropriated from the 1MDB fund.

Riza was alleged to have committed the offence between April 12, 2011 and May 12 at City National Bank, Los Angeles Main, 525 South Flower Street, Los Angeles, California, USA.

Riza was also charged with committing the same offence involving US$9,000,000 through a money transfer transaction from the same account on Sept 10, 2012 and Oct 2012 at the same location.

On the third and fourth charges, the accused was charged with committing the same offence involving US$133,000,000 and US$60,000,000 through a money transfer transaction from account number 81134378 belonging to Aabar Investment PJS Limited at BSI SA, Lugano, Switzerland to a BSI Bank Limited Singapore account number 6C02250A belonging to Red Granite Capital Ltd.

The charges were made under Section 4(1) of the Anti-Money Laundering, Prevention of Terrorism Financing and Proceeds from Unlawful Activities Act 2001 which provides for a fine of up to RM5 million or a jail term of up to five years or both, upon conviction.