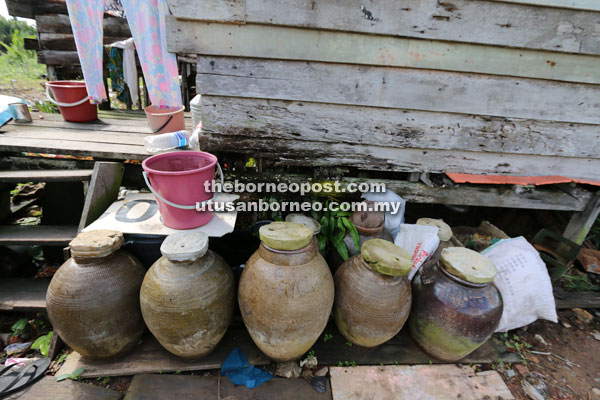 Low water pressure resulted in supply not being able to reach houses up to several days causing residents to resort to collecting rainwater. File Photo

SIBU: About 2,000 villagers of Kampung Sebakau, a fishing village in Pulau Bruit, Mukah Division, want the authorities to look into their daily plight following irregular piped water supply since early this year.

Low water pressure resulted in supply not being able to reach houses up to several days causing residents to resort to collecting rainwater.

Nonetheless, when there is a dry spell, the people here have to buy bottled water for drinking or cooking and bathe in oil palm plantation drains.

“Sometimes, water supply disruption goes on for several days and water supply only returns at night, in a trickle and we have to collect water by all means.

“During a dry spell when our collected supply is used up, we have to buy bottled water for drinking and cooking and take our baths at a nearby plantation drain,” he said.

One of the villagers, Nasir Musel, 60, said the move to bring their problem to the mass media was not aimed at blaming anybody, but to inform the authorities the problems faced by the villagers.

“Just before the fasting month, water flow started slowing down due to low pressure.

I contacted the Rural Water Supply Department (JBALB) and the water supply returned,” he said.

He also said he does not know why the problem is dragging on for so long. Speaking to reporters at a Hari Raya Aidilfitri and Dayak Gawai Open House in Belawai on Saturday, Works Minister Baru Bian said there should be cooperation between the state and federal governments to address the issue of water supply in the coastal areas of Sarawak. — Bernama