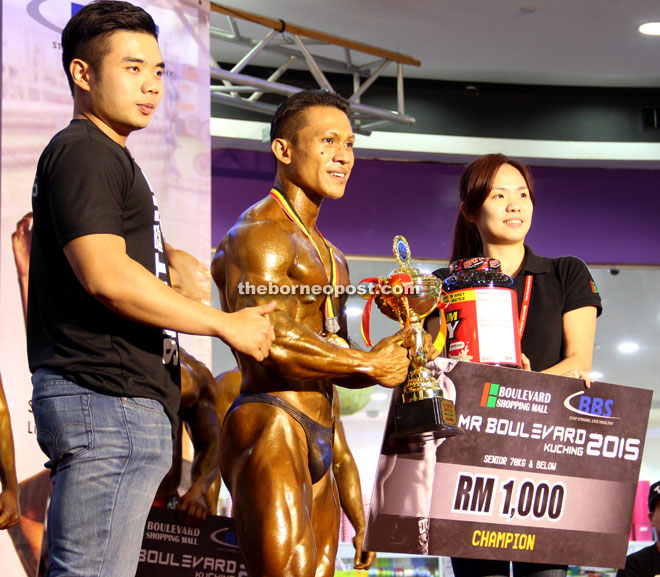 KUCHING: Members of Sarawak’s bodybuilding fraternity mourn the loss of one of their brothers, Wilfred Harding Jiee.

The former Mr Sarawak champion was found unconscious by a family member in his room at their residence in Stakan Jaya near here late Monday.

“We rushed him to Sarawak General Hospital (SGH), but close to midnight, he was pronounced dead.

“It’s a truly sad day for us. Still, we need to be strong,” his widow Yvonne Campbell told The Borneo Post when met at SGH here.

Wilfred, who would have turned 41 this Sept 8, was a teacher at SMK Serian.

His funeral will be tomorrow (or Wed, July 10) at Kampung Serasot, in Bau.

The mass service will be held from 11.15am to 12pm, before Wilfred is laid to rest.

He began bodybuilding in 2012, and received his first competitive win at Mr Gym 1Malaysia Sarawak 2013.

Since then, he has never missed a chance to participate in major bodybuilding championships in the country, including Mr Sarawak and Mr Malaysia.

Last year was his crowning achievement when after six years in the sport, he finally clinched the overall championship title at the 54th edition of Mr Sarawak, held in Kuching.

Wilfred is survived by Yvonne and their sons – Daniel, Dexter and Dawson, aged 14, 13 and nine, respectively.

“I’m really sad because he was selected to represent Kuching again for Mr Sarawak. I strongly believed that this year, he would achieve his dream at the coming Mr Malaysia championships as an early gift for his birthday in September.

“He had contributed a lot to Sarawak bodybuilding, inspiring many young bodybuilders. My deepest condolences to the family; we, at SBBA, will come up with something to comfort the family during this difficult time,” he said.

SBBA secretary Dr Malvern Abdullah expressed his “utter sadness” over Wilfred’s passing, stating: “We have lost a remarkable bodybuilder, teacher, friend and comrade. We can only offer our heartfelt condolences to his family and kids in the hope that they can find comfort during this difficult time.”

Messages of condolences had been pouring in on social media, written by fellow bodybuilders, associations and friends.

On its Facebook page, Sibu Bodybuilding and Weightlifting Association wrote: “Today, Sarawak bodybuilding mourns the loss of one of our favourite champion bodybuilders, Wilfred Harding.”

“May his soul rest in peace, and may God continue to guide and strengthen his family during this crucial moment.”

Miri Division Bodybuilding Association posted: “We say goodbye to our friend/team-mate Wilfred Harding — gone from our sight, but never from our hearts. Our thoughts and prayers are with his wife, children and family members.”

“We know for certain that we never lose the people we love, even to death. They continue to participate in every act, thought and decision that we make. Their love leaves an indelible imprint in our memories. We find comfort in knowing that our lives have been enriched by having shared his love.”