Tuesday, January 28
You are at:Home»News»Sabah»Dengue prevention should be taught in schools – researcher 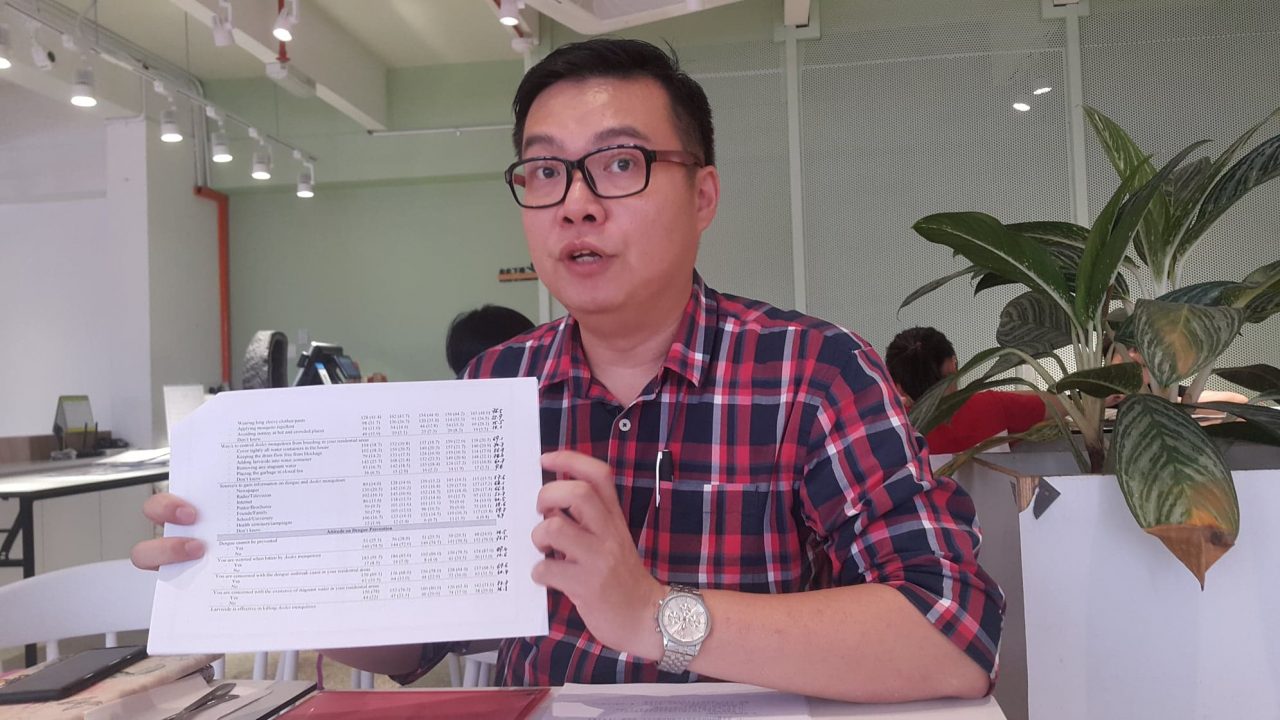 Chen explaining the results of the survey.

THE awareness level on the dangers of dengue in Sabah is still low, as only 58.4 per cent of its people would actually make an effort to curb the spread of the virus.

In a recent survey conducted by the University of Malaya (UM), it was revealed that 79.1 per cent of Sabahans have good knowledge on the breeding of Aedes mosquitoes.

At least 73 per cent of them are aware of the presence of stagnant water in their residential areas while 82 per cent know the importance of Aedes prevention.

Taking into account the said figures, it is rather shocking that only 58.4 per cent of Sabahans would react when they come across a hideout for the potentially deadly insect.

To delve more into the issue, The Borneo Post spoke with Dr Chen Chee Dhang, a senior researcher at UM’s Institute of Biological Sciences.

Dr Chen said his research showed most communities obtain information on dengue prevention from television and radio (68.1 per cent), Internet (66.3 per cent), health seminars and campaigns organised by local authorities (59.7 per cent), newspapers (57.6 per cent), posters and brochures (52.7 per cent), and family and friends (40.5 per cent).

In view of this, Dr Chen suggested that knowledge on dengue prevention should be taught in school, as early as the primary school level.

“By teaching young children, the parents would also learn. Such information could also be put on textbooks,” he added.

According to Dr Chen, that there are over 3,000 species of mosquitoes in the world; 300 of them belong to the Aedes genus.

Interestingly, in Malaysia, there are only two types of Aedes mosquitoes that can transmit the dengue virus, namely the Aedes aegypti and Aedes albopictus. 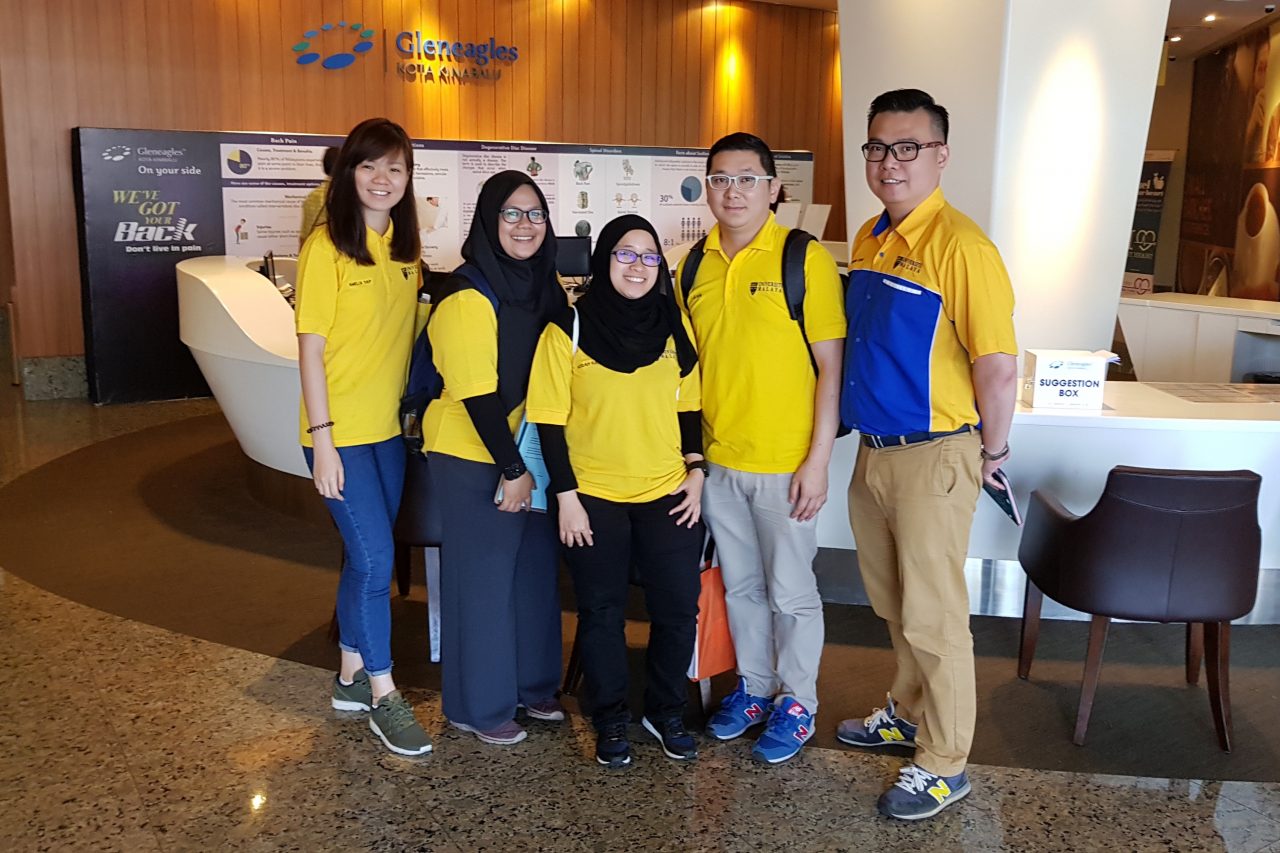 Dr Chen (right) and his students conducting a survey at Gleneagles Kota Kinabalu.

“A single blood-fed female Aedes mosquito is able to lay up to 100 to 200 eggs, after each time it consumed blood. They can lay eggs up to four to five times in their life span,” said Dr Chen.

He stressed that Aedes mosquitoes have strong vitality and that they can even survive on dry conditions up to six months.

He explained that Aedes mosquitoes would only need a very small amount of water to survive; for example, the water in a cap of mineral water bottle is enough for an Aedes mosquito to breed.

Dr Chen was one of the researchers involved in the said survey carried out last December in all the five divisions in Sabah, with a total of 1, 000 respondents.

“In West Malaysia, there are several institutions that are currently studying Aedes, such as UM, Universiti Kebangsaan Malaysia (UKM) and Universiti Sains Malaysia (USM), and the Institute of Medical Research (IMR).

“However, in East Malaysia, it is very rare to see the institutions here conduct such studies. That is why I had decided to conduct my research here,” he said, pointing out that the dengue issue in Malaysia is getting more serious.

According to him, the people in Sabah can generally ascertain the symptoms of dengue but they do not know when these Aedes mosquitoes would actually go out to hunt for blood.

“Aedes mosquitoes would usually bite during the day. They are most active during morning time, from 5 am to 8 am; and in the late afternoon, from 4 pm to 7 pm.

“Aedes mosquitoes would also actively look for blood in shaded areas with high vegetation. They are affected by the temperature and humidity of their environment,” said Dr Chen.

“Each type of mosquitoes would have its own behavior. Just like humans who have to eat three meals at different hours of the day, mosquitoes also have their own specific time to eat. So each species would consume blood at different times.

“Advertisements would usually touch on this but they don’t tell the people the specific time that the mosquitos bite. So you don’t know when you are supposed to avoid these mosquitoes,” he added.

Dr Chen said this information is vital when it comes to preventive measures. For example, it would help you to know when you should spray aerosol in your room – so you can kill the mosquitoes at the right time

“If you want to kill Aedes mosquitoes, you have to choose the right timing. This is important for the local authorities when they want to conduct fogging,” he said.

Dr Chen reckoned that the health authorities in Sabah are well aware of the biting habits of Aedes mosquitoes.

However, the issue here is whether the information was passed on to the communities on the ground.

Contrary to popular belief, Dr Chen said that Aedes mosquitoes do not only breed on ‘dirty’ water.

“For example they are most likely to breed on the stagnant water on flower pots, used tires, unmaintained toilet bowls and dustbins,” he said.

He explained that the common symptoms of dengue may include headache, joint pain, fever, rashes, coughing, vomiting; or more serious ones such as bleeding gums, a bleeding nose, or blood in urine, stools or vomit.

“Not all symptoms would appear at once. But if you have fever, along with two or three other symptoms, you might want to get checked,” he said, adding that the bite marks of Aedes mosquitoes look very similar to a normal mosquito bite.

Previous ArticleDrop delimitation proposal for Sabah, PM urged
Next Article ‘I owe it to my late mum’ – Dr Mahathir