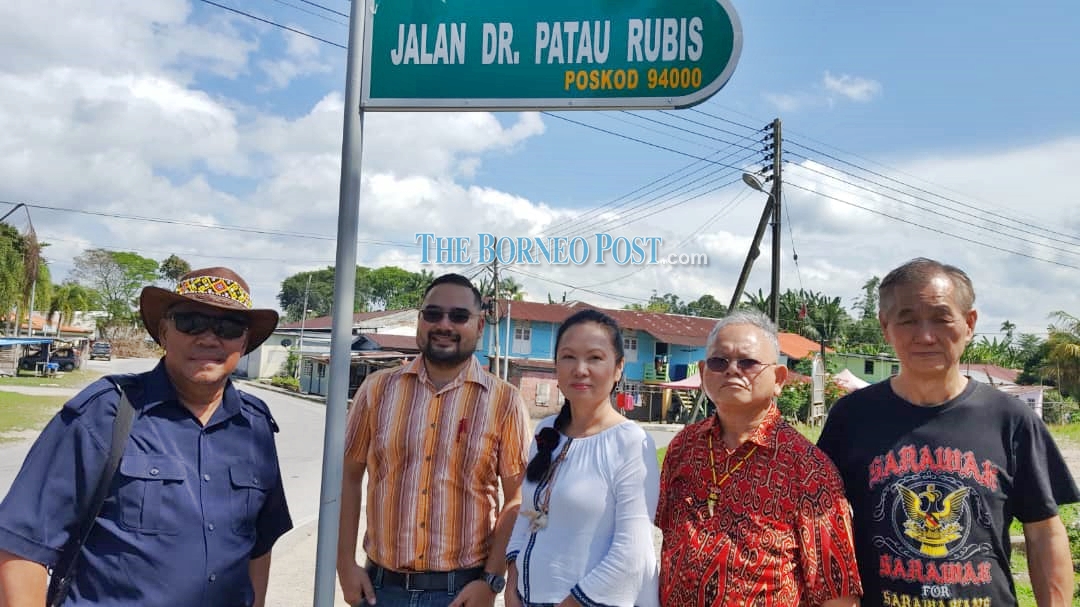 Sean (second left) with Soo (centre) and (from left) Alim, Salam and Voon pose at the location of the new road.

Star president Lina Soo said Jalan Dr Patau Rubis – which is off Jalan Tasik Biru – was yet unnamed until yesterday.

Officiating at the ceremony was Tasik Biru assemblyman Datuk Henry Harry Jinep, she said in a statement.

“The decision by Bau District Office to name the road after Dr Patau Rubis was in acknowledgement of Dr Patau’s contributions to the tremendous development of Bau when he was serving as Assistant Minister of Works,” she pointed out.

According to Soo, the Bau hospital, Bau Civic Centre, stadium, balai raya, churches, Siniawan bypass, rural electrification and gravity water feed of many areas of Bau and many village roads were some of the projects approved and implemented during Dr Patau’s tenure as a state assemblyman, member of parliament and assistant minister.

“We express our thanks to the State Naming Department under the Local Government and Housing Ministry and Bau District Council for making it possible,” she said.

She asserted that Dr Patau Rubis was an icon in Bau and deserves to be honoured.

Among those present to witness the naming of the new road were Dr Patau’s son Sean Rubis, relatives and friends including Alim Mideh, Salam Chimie and Albert Voon.

Dr Patau, who passed away in March 2016 founded Star after being suspended from the Sarawak National Party and sacked as state assistant minister in 1995.

Prior to participating in politics, Dr Patau was the state deputy director of Health Department, having been appointed to the post in 1982.

Previous ArticleUrgent need to deal with encroachment into Sarawak waters
Next Article Masing: No PSB members in finalised list of local councillors