Monday, July 13
You are at:Home»News»Ukraine to continue buying palm oil from M’sia, not tied down by EU rules says ambassador 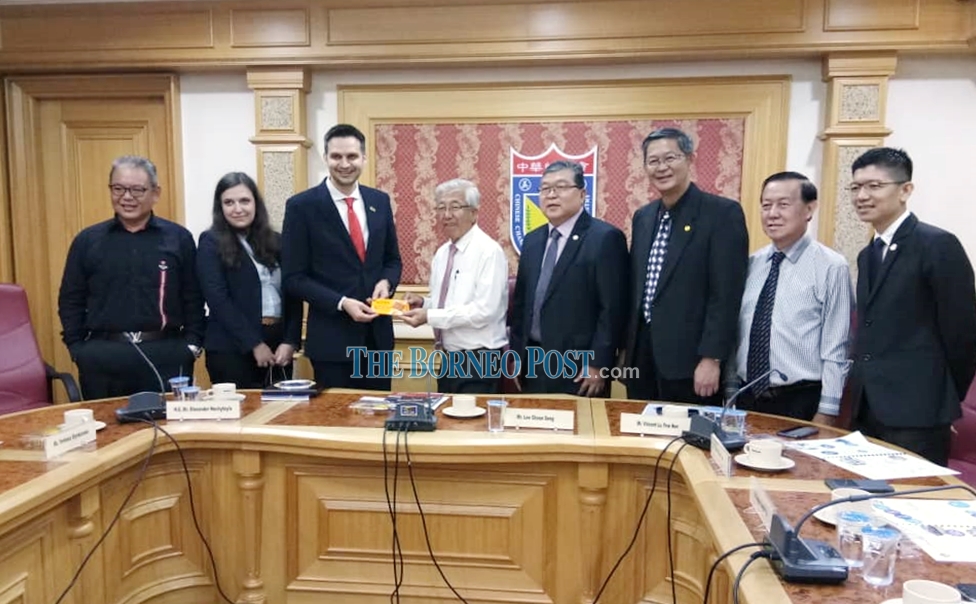 Olexander (third left) presents a Ukrainian chocolate to Lee after the meeting.

MIRI: Ukraine has been steadily increasing the amount of palm oil purchased from Malaysia for the past three years.

Ambassador of Ukraine to Malaysia Olexander Nechytaylo said Ukraine buys twice as much palm oil from Malaysia as compared to Russia.

“We believe this is our commitment to Malaysia and we do it not just because we want to help Malaysia, but because we believe it’s a win-win situation for both Ukraine and Malaysia,” he said.

Olexander said this during a dialogue session with members of the Miri Chinese Chamber of Commerce and Industry (MCCCI) at the MCCCI conference room here today.

According to Olexander, Ukraine is not a full member of the European Union (EU) and they do not have to implement all the rules and regulation set by them.

“We are not a full member of the European Union. We are an associated member and that allows us not to implement sets of rules and regulations issued by the EU on palm oil,” he pointed out.

The European Parliament is reported to be in the process of banning the use of palm oil for biofuel while the retail networks in Britain and Iceland as having announced that they will stop using the commodity.

Malaysia is the top producer of palm oil in the world and together with Indonesia, produce almost 90 per cent of the world’s palm oil.

He added that Ukraine looks forward to collaborating closer with Malaysia in the palm oil industry as well as to look into other sectors that could also benefit both countries, such as education and culture.

“I believe there are lot of opportunities between Ukraine and Malaysia. By visiting Miri, especially MCCCI, we wanted to highlight a bit of the major opportunities available in Ukraine,” he said.

Previous ArticleYouths should have characteristics employers look for in employees – Dr M
Next Article Malacca businessman defies all odds, strikes 4D jackpot not once but twice