Friday, August 14
You are at:Home»News»Crime»Daring car thief drives off with 4WD after owner leaves engine running at petrol station in Sibu 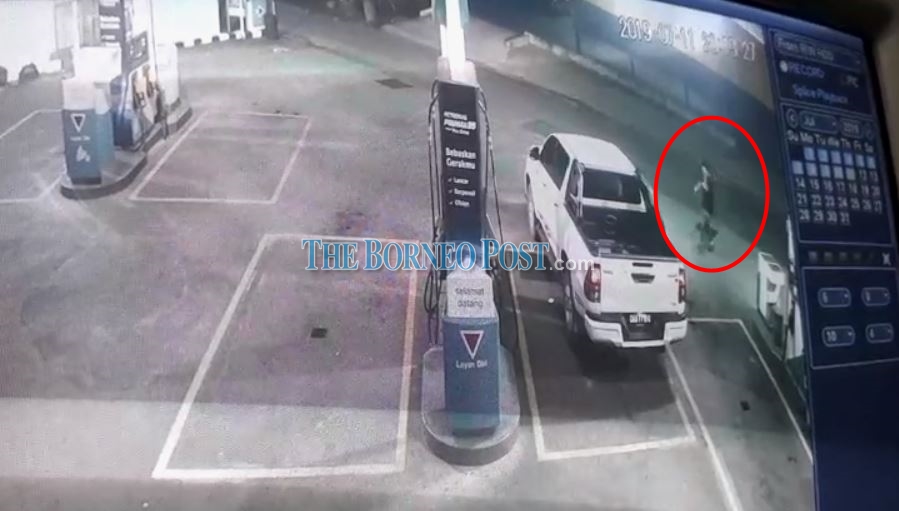 Police are now on the lookout for the suspect (circled in red) and the stolen vehicle with the registration number QAA 7719 U. CCTV footage courtesy of the petrol kiosk where the incident happened.

SIBU: A 42-year-old auto spare parts dealer had his four-wheel-drive vehicle hijacked at a petrol kiosk when he left the engine running.

The victim had earlier stopped at the petrol kiosk at Jalan Lanang at about 7.45pm on July 11 to refill.

After refilling, he went to the counter to get his receipt stamped and left his vehicle unattended with the engine running.

Recordings from the closed-circuit television (CCTV) of the petrol kiosk, which have since gone viral, shows the suspect, dressed in a black T-shirt and jeans, emerging from nowhere and rushing towards the vehicle before driving it away.

The supervisor of the kiosk said two of his workers, together with the victim, gave chase after they realised what had happened.

“The victim managed to grab hold of the vehicle but the suspect swerved around dangerously, causing the victim to lose his grip and hit his head on the ground.

The victim also narrowly escaped being run over by a passing lorry as he lay injured.

He suffered head injuries and lacerations on his body as a result, and was later admitted to Sibu General Hospital as he was believed to have suffered from internal bleeding.

A police report was lodged by the victim as well as the supervisor of the kiosk.

Police are now looking for the vehicle with the registration plate number QAA 7719 U.