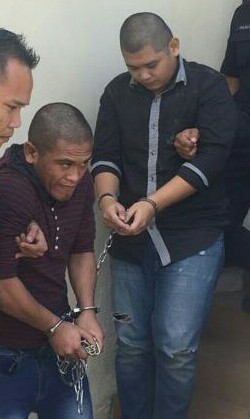 Amru (right) and Arsit will have their case re-mentioned on August 8.

TUARAN: The Magistrate’s Court here ordered one of the accused persons charged with murdering a Grab driver to be referred to a mental hospital.

Magistrate Jessica Ombou Kakayun made the order on Amru Al Asy Japri under Section 342 of the Criminal Procedure Code, yesterday.

During yesterday’s proceedings, counsel Aida Jaafar Mad Ariff, one of the counsels representing Amru, informed the court that Amru’s father could not find his son’s Bukit Padang treatment card, so the defence had written a letter to the mental hospital requesting to get Amru’s previous medical records with the hospital.

However, a reply letter from the hospital, which was tendered to the court by the counsel, stated that the person involved has to come to the hospital to get the records which were confidential.

Prosecuting officer Inspector Papilus Primus requested for another mention date as the prosecution had not received the postmortem and chemist reports for this case.

On June 10, during the first mention of this case, counsel Dominic Chew, who also represented Amru, had applied for his client, who is the second accused, to be sent to a mental hospital.

The application was to have his client referred to the hospital for observation whether Amru was fit to plea or not.

Dominic at that time also submitted that Amru allegedly had a history of being treated at a mental hospital before the incident.

The magistrate then ruled that Amru needed to produce his treatment card before the court for such application.

Amru, 24, was jointly charged with Filipino Arsit Indanan, 20, with murdering Muhammad Hanafiee Jaffar, 27, inside a car at the roadside off Jalan Marabahai in Tuaran, between 4am and 5am on May 25.

The alleged offence was framed under Section 302 of the Penal Code, read together with Section 34 of the same Code, which carries the mandatory death sentence, upon conviction.

The court fixed August 8 to re-mention the case and both the accused persons, who before the alleged incident worked as car wash workers, be further held in custody, pending the disposal of their case.