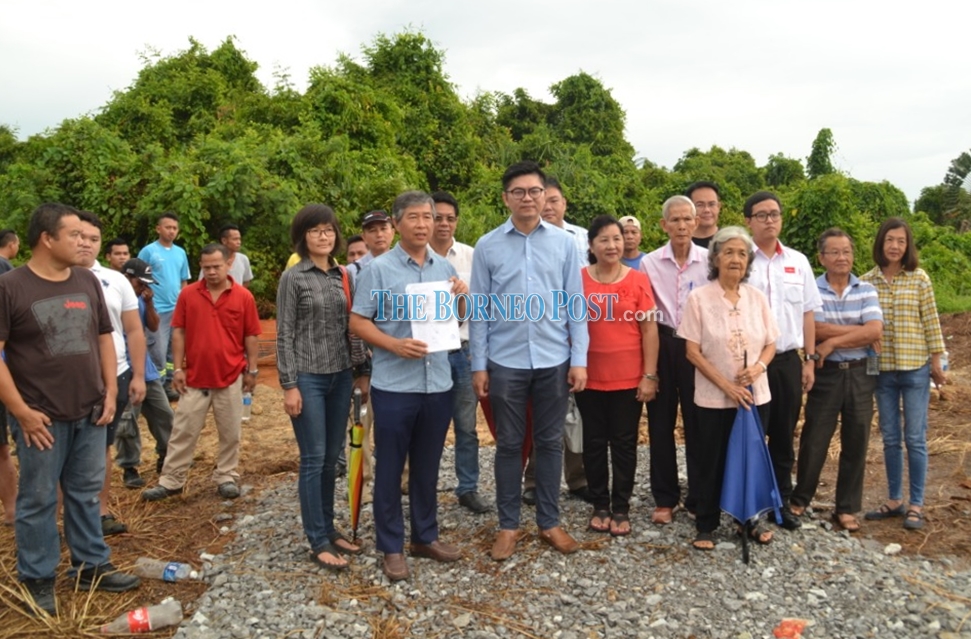 Wong (front, second left) and the residents near Jalan Jambu at the erection site, with Hwong (front left) showing the petition against the erection works.

Wong questioned SMA about the need to erect another tower in the middle of the residential area.

Highlighting the presence of two existing towers located within a one kilometre radius from the area as well as the absence of complaints relating to poor coverage, he further questioned as to why the tower was to be erected in such close proximity to the residential area.

According to residential area representative Hwong Haw Hing, he said the erection works began on Monday, with the base having undergone piling works.

“There are no notices or consultation given to them prior to the works. 23 residents have signed a petition to show their objection over the erection works.

“Without consultation with the residences, I believe there is something not right with this. I also believe that this is not in accordance to the existing standards – whereby the tower should be erected away from schools and from residential areas,” said Wong during a site visit to the construction area near Lorong Jambu 9 here today.

Further highlighting the residents’ objections against the works, he said the authorities should answer his queries and that the state government should consult with the residents regarding the issue.

“But before that, the works should be halted first to avoid a public outcry. The state government should explain to the residents as to why the tower needs to be erected,” he added.

Previous ArticleYang di-Pertuan Agong leaves for Saudi Arabia today
Next Article Abang Johari: Cabinet reshuffle not on the cards yet