Wednesday, June 3
You are at:Home»News»Crime»Illegal moneylenders busted by cops, over RM270k in cash seized 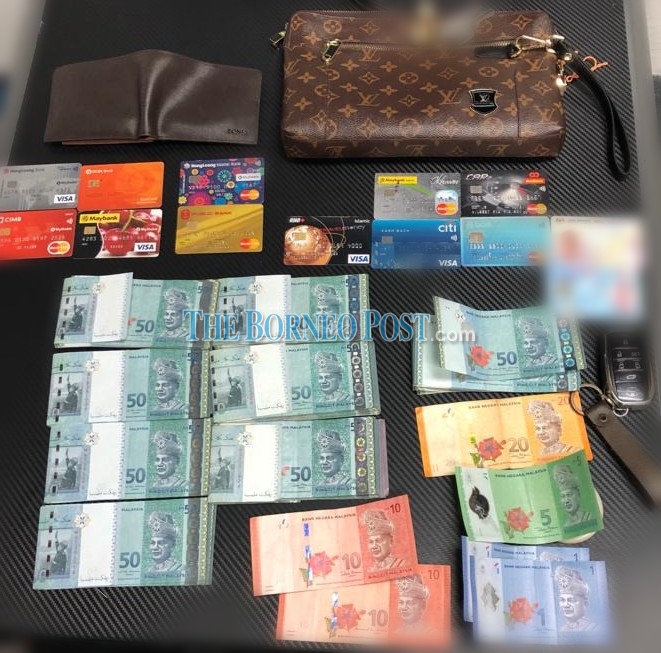 The money and items which were seized from the suspects.

CCID, together with the Kuching District Police, arrested the suspects during two separate raids which were carried out on July 11 and July 13 here.

“The raids and the arrests were carried out after two police reports were lodged against them by two of their victims,” CCID head Supt Mustafa Kamal Gani Abdullah said in a statement today.

The suspects were alleged to have threatened their victims by claiming that they were a group of influential people who have strong connections with the police.

“Their victims were required to pay a weekly or monthly interest of 20 per cent for their loans,” said Mustafa adding that all three suspects are currently under remand for investigation.

During the first raid, police seized items worth RM270,000 and three handphones from the suspects while the second raid saw the seizure of a luxury vehicle, cash money amounting to RM7,997, one handphone, six ATM cards and five credit cards.

The suspect’s modus operandi was to attract victims by advertising their moneylending services on social media platforms such as Facebook and mobile applications.

Last year, CCID received a total of 46 cases related to unlicensed moneylending which saw the arrest of 20 suspects involving losses amounting to RM485,040. Out of the 46 cases, 15 have been brought to court.

Between Jan 1 to July 12 this year, the CCID said Mustafa was investigating a total of 25 cases involving losses amounting to RM155,600.

“So far, a total of 17 suspects have been arrested and five cases have been brought to court,” he added.