Sunday, September 19
You are at:Home»News»Crime»Drug syndicate busted with arrest of four suspects in Sibu 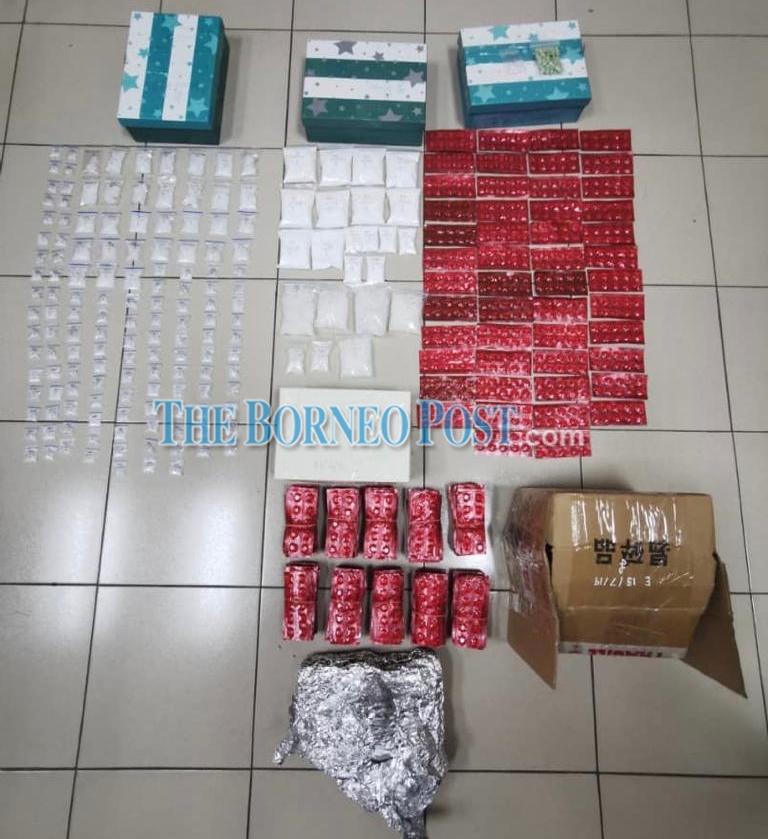 Among the items seized during Operasi Sulit on Saturday.

State Narcotics Criminal Investigation Department chief Supt Sahar Abdul Latif said the arrest of the four suspects – three locals and a woman from China – aged between 25 and 26, led to the seizure of various types of drugs worth about RM229,410.

He said that a team of policemen had raided a house at Lorong Wong King Huo here at around 11.45am on Saturday, following an information and intelligence obtained on the alleged drug dealing activities.

“One of the suspects tried to escape by jumping off the verandah to the ground floor when police entered the house but they managed to capture him later.

“The team also arrested three other suspects who were at the dining room of the house at that moment,” he said in a press statement today.

He said the police searched the house and found a green box kept in a drawer in a room of the house.

The box contained 140 translucent packs of crystalised substance suspected to be syabu weighing at 212 grammes, he said.

In another room, they found another green box which containing 16 translucent packs of white powder suspected to be Ketamine weighing at 543 grammes.

“There was also a red box where the team found seven translucent packs of crystalised substance suspected to be Syabu weighing at 335 grammes.

“Another green box containing a total of 3,000 pills suspected to be Erimin 5 weighing at 899 grammes and 75 Ecstacy pills was also found in the room,” he said.

All the items were seized and the suspects were later taken to Sibu police station for further action, he said.

Police classified the case under Section 39B of Dangerous Drugs Act 1952.

According to Sahar, the suspects who were unemployed, were believed to be involved in drugs distribution activities in Sibu in early 2018.

Urine test conducted on two of the suspects came back negative (of drugs), he said.

“One of them had a previous conviction for drug offences. Police also seized two cars, a gold necklace worth RM1,500, a gold bracelet worth RM2,190 and local currency worth RM5,000,” he added.