Sunday, September 19
You are at:Home»News»Sabah»Sabah medical tourism ‘much cheaper’ 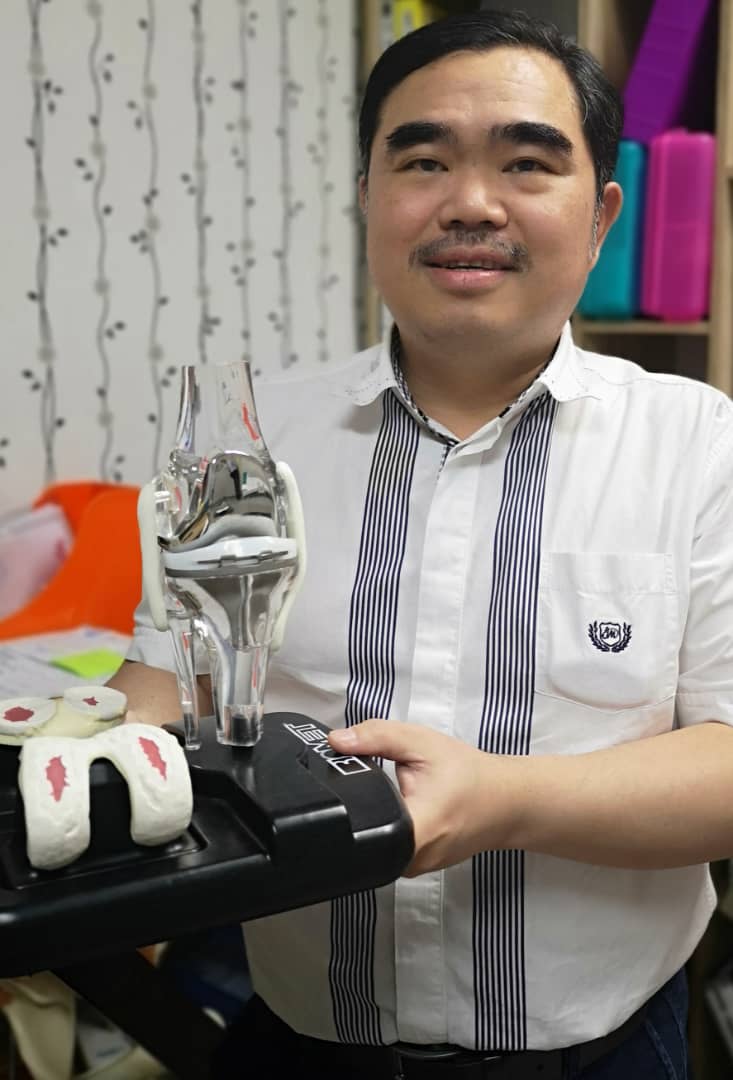 Dr Hoari holding a replica of the human knee anatomy.

As a matter of fact, if you drop by any of the hospitals, both privately and publicly run facilities in the Sabah’s capital of Kota Kinabalu, you’re unlikely to see and meet anyone foreign looking or speaking foreign tongues.

And chances are, even if you do see some foreigners, they are more likely part of the Malaysia My Second Home programme (MM2H) and hold permanent residency status here.

This is not to say that Sabah lacks the expertise in the field of medicine nor does it lack modern facilities. A visit to the KPJ Sabah Specialist Hospital’s directory will show that Sabah has the necessary expertise – anaesthesiologists, cardiologists, ENT specialists, gastroenterologists and so on. Just name it.

However, it does lack the direct flight connectivity from destinations such as Indonesia and other parts of the region, excluding China and South Korea. Just imagine, a patient from Jakarta would have to spend between six hours and eight hours just to get to Kota Kinabalu due to the lack of direct flights that services the Kota Kinabalu — Jakarta — Kota Kinabalu route.

Otherwise, the flight would take less than three hours to conclude, and the patient won’t have to endure several hours of waiting on the cold concrete floors of the airport for their connecting flight. This is already a challenge for a healthy traveller — what about a traveller who is unwell?

Flying to Sabah for medical treatment would definitely be a huge turn off.
Even a patient from Balikpapan in Kalimantan, Indonesia (which is sited on the same island of Borneo) has to endure two stopovers prior to arriving to Kota Kinabalu and spend a minimum 18 hours travelling. It is ironic since it merely takes two and a half hours from passengers from Kuala Lumpur to arrive to Kota Kinabalu which is 1625 kilometers away, and over 18 hours of travelling time from Balikpapan to Kota Kinabalu which is merely 810 kilometers in distance.

When speaking to Dr Hoari Krishnan, KPJ’s Sports Injury and Arthroscopy specialist recently, he affirmed that most of his patients were locals.

“For us, it is a closed market,” he said on medical tourism.

He added that prior to the termination of the direct Jakarta to / from Kota Kinabalu flight route, there were Indonesians seeking treatment at the hospital, which is privately owned.

He also said that neigbouring Indonesia was one of the hospital’s main foreign market.

Unfortunately, patients from Indonesia dwindled following the termination of the direct fligths between Jakarta and Kota Kinabalu, and now patients are opting destinations such as Singapore, Kuala Lumpur and even Penang to undergo their medical treatment. A check on the arrival of tourists to Sabah also affirmed the drop in the arrivals of Indonesians to Sabah as of April, this year.

“It is a pity for Kota Kinabalu because we have everything with regards to our medical facilities and specialists,” he said. The cost of procuring treatment in Sabah is also cheaper as compared to destinations such as Singapore, Kuala Lumpur and Penang.

Citing his area of expertise as an example, he said that he handles a lot of knee injury related cases.

“I did an Anterior Cruciate Ligament (ACL) surgery involving two injuries on an athlete and it costs him less than what it would cost him elsewhere,” he said. A further discussion revealed that if the treatment was carried out in Peninsular Malaysia, the athlete would probably have to fork out between RM40,000 and RM45,000.

Procedures such as Total Knee Replacement or TKR is also cheaper here as compared to private hospitals in Kuala Lumpur which charges from RM35,000 onwards and right up to RM40,000.

TKR, he explained, is a surgical procedure that replaces the damaged knee with titanium and plastic parts.

“The knee is damaged by osteoarthritis. Knee damage often occurs on people who are 50 years old and above, as well as people who are obesed. It has a lot to do with the aging process,” he said.

Nevertheless, with the ongoing craze in active lifestyles, he also sees a lot of younger patients suffering from knee related injuries due to their sports related activities. They are between 20 years old and 30 years old.

The treatments he has carried out range from Hyaluronic acid injection, which is used to treat knee pain caused by osteoarthritis, to carrying out Anterior Cruciate Ligament (ACL) surgery as well as Total Knee Replacement (TKR).

“The Hyaluronic acid injection can help reduce knee pain due to arthritis. We do have this acid produced naturally in our body but as we age, the production lessens. Among the benefits of this jab is it improves mobility. However, it is used only to treat the early form of osteoarthritis,” he explained.

For later stage osteoarthritis, patients may have to undergo TKR.

Dr Hoari said that TKR is mostly suited for older people as they are prone to undertake less physical activities, which slows down the wear and tear of the knee prosthesis installed.

“For older patients, the knee prosthesis may last for more than 20 years because they are less active.

Once they have the prosthesis installed, they would have to undergo physiotheraphy to regain the mobility and strength of the affected limb. This healing process may take between six month and a year,” he said.

The entire surgery takes an hour and a half to undertake, and by the second day, most patients are able to walk.

“If everything goes as planned, by the fourth or fifth day, the patient can already be dismissed from the hospital ward.”

He said that the patient will need one week to two weeks to look after the wound and that he considers the battle won when there are no ensuing infection(s).

“Physiotherapy is important to gain full extension and flection of the muscle. Most patients will experience tightening of their muscles initially.”

He further suggests two to three months of rest for golfers, and six months and above for casual footballers.

“Usually, total recovery takes between six months and a year.”