Wednesday, January 22
You are at:Home»News»Youth gets 7 years, 2 strokes for raping underage acquaintance 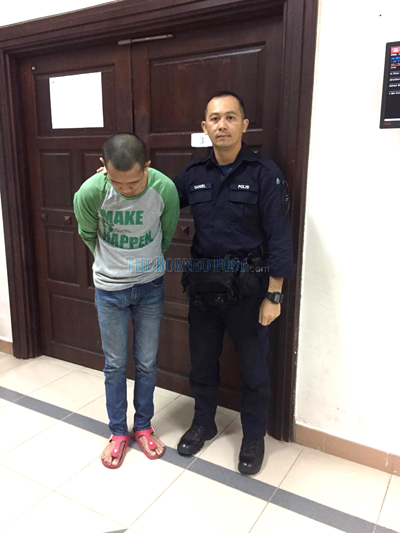 Nur Syukeri at the court after sentencing yesterday.

KUCHING: A self-employed man was sentenced to seven years’ jail and two strokes of the cane by the Sessions Court here yesterday for raping a minor he became acquainted with on WeChat.

Judge Marutin Pagan handed down the sentence on Nur Syukeri Superdi, 21, after he pleaded guilty to a charge under Section 376(1) of the Penal Code. Under the charge, Nur Syukeri could have been jailed for up to 20 years and whipped.

According to the facts of the case, the accused had communicated with the victim for seven days and developed a romantic relationship with her before committing the rape.

Following the rape, the then 13-year-old victim informed her family of what had happened and subsequently lodged a police report. In mitigation, Nur Syukeri, who was unrepresented, told the court he regretted what he had done and pleaded for a lighter sentence, saying he had a sick mother and a young child to care for.

“I realise I have committed an offence but I appeal to the court to be compassionate as I regret my action,” he said.

He also asked for his jail sentence to commence from the date of his arrest – Sept 25, 2017.

DPP Nor Azhari Yusof, however, said the case was a serious offence and urged the court to take into account the frequency of rape cases in deciding on the sentence.

“For the information of the court, the accused was previously allowed bail. However, he failed to appear in court. In fact, arrest warrants were also issued and the accused was remanded in prison.

“Therefore, he must be subjected to a severe penalty and must also be whipped,” said Nor Azhari.

Judge Marutin, in handing down the sentence, ruled that Nur Syukeri’s jail term was to commence from yesterday.