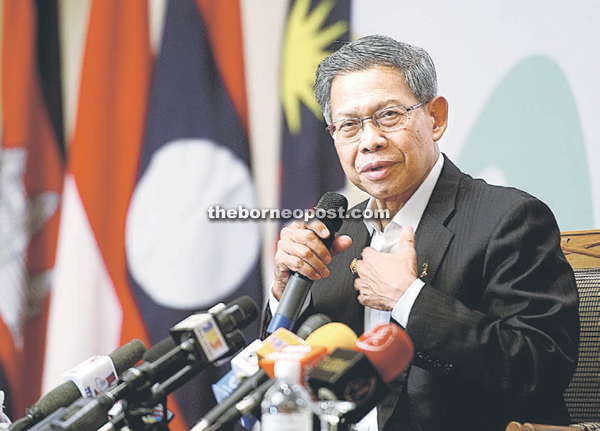 KUALA LUMPUR: Malaysia’s national debt rose to RM1.09 trillion in 2018 from RM1.08 trillion in 2017, based on accrual accounting, said Datuk Seri Mustapa Mohamed, chairman of the Special Select Committee on the Budget.

The government had adopted accrual accounting in 2011, in line with the International Monetary Fund’s guide on Public Sector Debt Statistics which applies the same method.

The government began the process of migrating from cash-based accounting to accrual accounting in 2015, which would be completed in a year or two, said Mustapa.

“The difference between then and now is that the committee has decided that we need to take liabilities into account as the government is obliged to pay,” he told a press conference on the first statement on the government’s debts and liabilities for the 2018-2020 session here today.

On RM266 billion of government guaranteed debts, he said some of the entities were capable of settling their own debts, while the rest of the debts — including principal amounts and interests — falls under the government’s obligation and should be taken into account.

Meanwhile, the debts which the government is not obligated to pay include Perbadanan PR1MA Malaysia (RM5 billion) and National Higher Education Fund Corporation (PTPTN) (RM37.7 billion).

Although the government needed to fully bear the cost of some projects, such as DanaInfra Nasional Bhd’s Pan Borneo highway and Mass-Rapid Transit 1 which required loans totalling RM52.74 billion, the projects still needed to be considered as liabilities, even though they would benefit the people and generate economic growth.

On 1MDB’s debt commitments, comprising sukuks and bonds encompassing the principal amount (RM32.2 billion) and interest (RM11.4 billion), the government has so far spent RM8.9 billion as the settlement fee and interest, he said.

According to Mustapa, there were several measurements which were used to identify the government’s debt liabilities, including the debt to gross domestic product (GDP) ratio of 51.2 per cent, but under the accrual accounting principles, it actually stood at 75.4 per cent as at end-2018.

He said the government targets the country’s deficit to be at 3.4 per cent of the GDP, compared with the previous government’s projection of 2.4 per cent.

The debt servicing-government revenue ratio stood at 13.1 per cent for 2018, which meant that for every RM1, 13.1 sen were for debt repayment.

The committee recommended several steps to strengthen the management and enhance transparency in the context of national debts and liabilities.

“These debts needs to be closely monitored based on several ratios. The committee wants the debts and liabilities to be tabled in detail to the Parliament, and for the records to be improved to show the obligations such as government guarantees (GG), public-private partnerships, private funding initiatives and PBLT Sdn Bhd.

“There should also be periodic assessments on the list of the debt obligations,” he said.

The committee had also proposed for the government to set a statutory or administrative limit on the cumulative GGs.

Allocations and expenditures to service other liabilities should also be detailed and reported under a special code in the annual budget estimates.

The committee also also needed to be informed of the real cost of debt servicing which needed to be monitored from time to time, including the debt-GDP ratio and government deficit-GDP ratio.

Additionally, the committee had proposed for the government to analyse from time to time the national debt burden in comparison with other countries, especially that of ASEAN countries and advanced economies, to ascertain the country’s real situation.

Looking at the amount of national debt, Mustapa said there was no issue of the country becoming bankrupt as all countries borrow and Malaysia has never failed to settle its debts.

He said developing countries need to borrow to spur their economic growth, but emphasis needs to be made on cost effectiveness of the projects and the ability to repay.

“We should not look at the absolute number of RM1.1 trillion but instead look at the relevant ratios based on the ability to repay via projects which could generate economic growth.

“The government should continue to monitor the ratios as it determines our capability to spend,” he said.

Mustapa said although the debt had increased, the nation’s economy has continued to grow, adding that the government should continue with fiscal consolidation measures. – Bernama